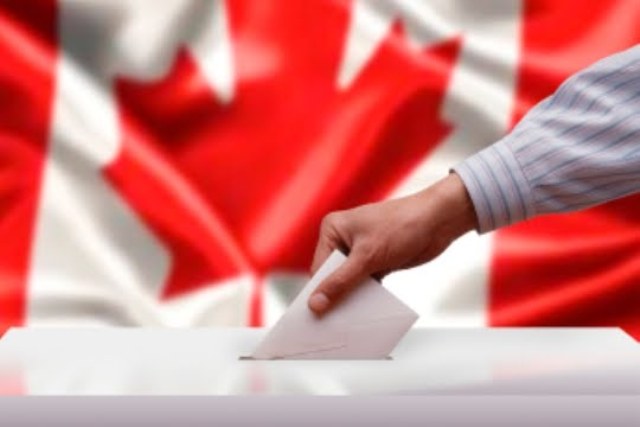 Too friendly, as some evidence seems to suggest. (Seriously, who kisses the PM? And this isn’t the first time. I recall the elders rolling their eyes in disappointment as young girls chased Trudeau down the hall after his talk at the RIS convention a few years ago).

Jokes aside, Canadian Muslims are breathing a communal sigh of relief this week. After a dark decade of living under Stephen Harper’s draconian rule, Justin Trudeau offers a refreshing change that brings Canada back to its tradition of multiculturalism and inclusivity.

While Harper had essentially shut out any kind of the engagement with Canada’s million Muslims (he’s never known to have set foot in a major mosque), Justin Trudeau is no stranger to the Muslim community. He has frequented mosques, iftars and other community events ever since assuming leadership of the Liberal Party in 2012. His party boasts a sizable number of Muslim MPs and he recently named Maryam Monsef has the new Minister of Democratic Institutions; Monsef, to this writer’s knowledge, is the first Muslim women to have been made a cabinet minister.

In addition, the new PM has hasn’t shied away from making his engagement with the Muslim community public. Despite immense pressure from right-wing activists to cancel his appearance at the RIS convention in 2012, Trudeau didn’t flinch and honoured his commitment even after the bad publicity. In his acceptance speech on election night, his decision to explicitly mention the story of a Muslim woman only confirms his bona fide belief in multiculturalism (pioneered once by his father) and his vision for a pluralistic society.

It is fair to assume that the days when anti-Muslim rhetoric was being propagated directly by Canada’s own government and senior politicians will be gone for the next little while. A change in leadership alone lifts the emotional and psychological burden caused by the intense scrutiny and suspicion the Muslim community underwent during the Harper regime. The change that Canadians were looking for was more of nostalgia for the pre-Harper days when the country wasn’t split along lines of race and religion; with that goal in mind, Trudeau has already delivered.

If this election has proved anything, it is that Canada is not somehow immune to the ugly racial politics which thrives on Muslim bashing to secure votes. One of the unexpected turns this election took was Stephen Harper’s decision to make a national spectacle out of one Muslim woman’s right to wear the niqab.

Zunera Ishaq is probably the only woman who can claim to have been openly bullied by a Prime Minister. Never in living memory has there been a woman who has been so vociferously ridiculed by some of the most powerful men in any nation. Despite the insidious slandering and legal attacks levied against her, Ishaq stood defiantly in the face of Canada’s most hawkish right-wingers and emerged victorious from a court battle that went on to define the federal elections.

Ishaq was instructed by the rich, white, middle-aged men running Canada that she couldn’t dress the way she wanted. She was told that her religious choice of wearing a face-veil was ‘offensive’ and that she belonged to the middle-ages. She was told that her way of life wasn’t welcome and that ‘this is not the way we do things here’. She was told to either abandon her ways, or go back to where she came from. ‘Be just like us if you want to become a part of this country’ was the message in a nutshell.

In 2011, the Conservative government decided to ban anyone from appearing at a citizenship oath-taking ceremony with a niqab. The ban was a sleazy political gesture meant to appeal to conservative aficionados. It was a non-issue at the time, and still is; to date there is a no data to indicate that veiled women at citizenship ceremonies were becoming such a nuisance that an official edict needed to be passed to ban the practice.

Last year, Zunera Ishaq, who immigrated to the country from Pakistan in 2008, decided to challenge to government ban. The courts sided with her and upheld her right to take the citizenship oath while wearing the face veil. The government appealed the decision but the courts dismissed the appeal this year and stood by her again.

With the elections right around the corner, the former Prime Minister decided to make Ishaq’s case an election issue. He vowed to challenge the case at the Supreme Court and repeal the ruling. He obstinately preached that the niqab goes against Canadian values and is ‘rooted in a culture that is anti-women’. He stoked fear of a niqab creep (and Muslims by extension), trying to score votes from NDP and Liberal supporters because the leaders of those parties opposed Harper’s stance.

With a faltering economy, a plunging loonie and the continued loss of jobs, Harper had nothing to fall back on but the politics of fear and division. Somehow, the niqab managed to become a ballot-box issue that Canadians were supposed to pick their leadership based on. Political pundits weighed in, Muslim leaders were consulted, op-eds were published and radio hosts filled our airwaves with discourses on this nonsensical issue.  All this as result of exactly two women who were affected by the niqab ban – the absurdity of the whole debacle is poised to make this issue one of the most lunatic moments in Canadian politics.

In the heat of all this, Ishaq somehow become one of the most pivotal figures in the election campaign. While most of us would have crawled up under such intense pressure, she decided to fight on and go public with her story. In an interview with the CBC, she explained her struggles, her background and the reasons why chooses to wear the niqab. She wrote op-eds in national papers explaining her stances.  To any informed observer, she made it quite clear that she is a strong willed and independent woman whose choices are born out of a personal conviction and not a result of servile obedience to her husband or father.

In the public battle with former PM, Ishaq won on all fronts. Just a week before the elections, she pledged allegiance to her new country while wearing the veil. Harper’s constant insistence on bringing up the niqab during elections, at one point suggesting banning it in federal offices, was recognized widely as a divisive political move which ended up only alienating progressive conservatives in his base. His inability to focus on the real issues facing the country only solidified his image as a pathetic loon who would utter anything to try to secure votes; it no doubt contributed to his eventual fall on election night.

Canadian Muslims can take pride in having played an unprecedented role in placing a progressive leader in the nations’ capital. For the first time in the country’s history, a nation-wide grassroots campaign was organized by young Muslims to mobilize the community to get out and vote. The Canadian Muslim Vote ran a masterful outreach campaign educating the community on the election issues at stake and on the immediacy to vote. 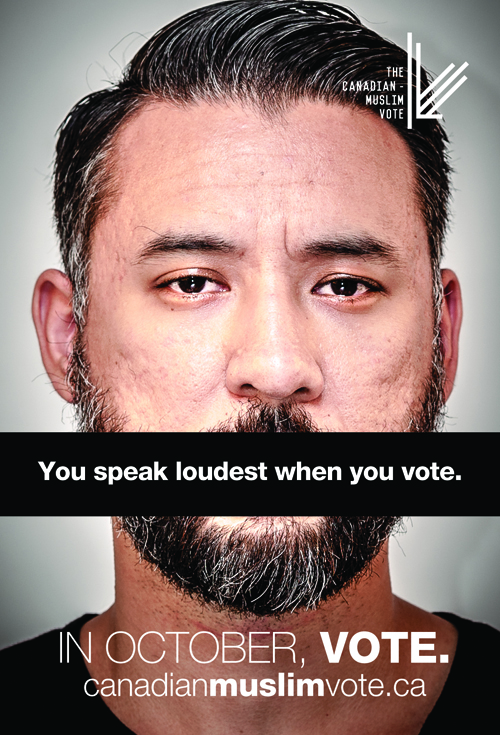 These brave souls went knocking on doors, reached out to mosques and tabled at virtually every public event. Debates were organized where senior politicians from each party directly addressed the Muslim community. Muslim intellectuals, actors, athletes and imams all banded together as part of the campaign and gave the community a united push to the polling stations.

Voting was so frequently the subject of sermons at mosques that it’s hard to believe there were once debates on the very permissibility of casting a ballot. Never before have mosques pushed congregants so hard to go out to vote – some only stopped short of publicly endorsing a political party. ‘If you don’t vote, don’t complain’ was the mantra during the days leading up to the election.

These efforts paid off and they most certainly played a crucial role in toppling the Harper government. Not a single Conservative MP was elected in urban centers like the Greater Toronto Area where Muslims have a significant population. These urban centers are key to winning elections for any party as they carry significant representation in the House of Commons. Past years have seen these ridings lost to Conservative MPs not necessarily because of high support, but because of inaction on part of progressive voters to make it to the polling stations. This year’s outcome serves a hard earned lesson on the positive outcomes of civic engagement and the consequences of inaction.

Perhaps the most important outcome of this campaign is that it has allowed political strategists to see the Muslim community as a significant voting bloc and the influence it can have in swaying election outcomes. Harper gambled; he thought the votes gained by stoking fear of Muslims would outnumber the support lost by alienating them. He failed to foresee the potential that rested in the minority he had been marginalizing should they choose to rise against him. Not to mention, when you alienate a people, you usually alienate their neighbors too and a ripple effect follows which is hard to recover from. Let this be a lesson for future politicians that racist identity politics are no longer a viable strategy in 21st century Canada.

This campaign also serves as an important precedent for Muslim minorities in other countries. One of the reasons that Muslim bashing is an acceptable practice amongst politicians these days, particularly in the US, is because of their inability to actually see Muslims has an organized voting bloc. There are no political repercussions of bashing Muslims; politicians don’t feel the need to make an effort to woo the ‘Muslim vote’ like they do for the Jewish or Hispanic vote. Political activism and engagement at the grassroots level is crucial if American Muslims want to turn the tide on the pervasive anti-Muslim bigotry in their nation’s political circles.

The removal of Harper’s regime from Canada’s political landscape represents an overnight change that reverses the dark direction in which the country was headed. Gone will be the days of senseless laws banning the niqab, of ludicrous snitch lines to report ‘barbaric cultural practices’, of stripping citizenship of individuals the government thinks are terrorists.

Prayers of gratitude are in order.

Understanding, and the Choice of Ignorance