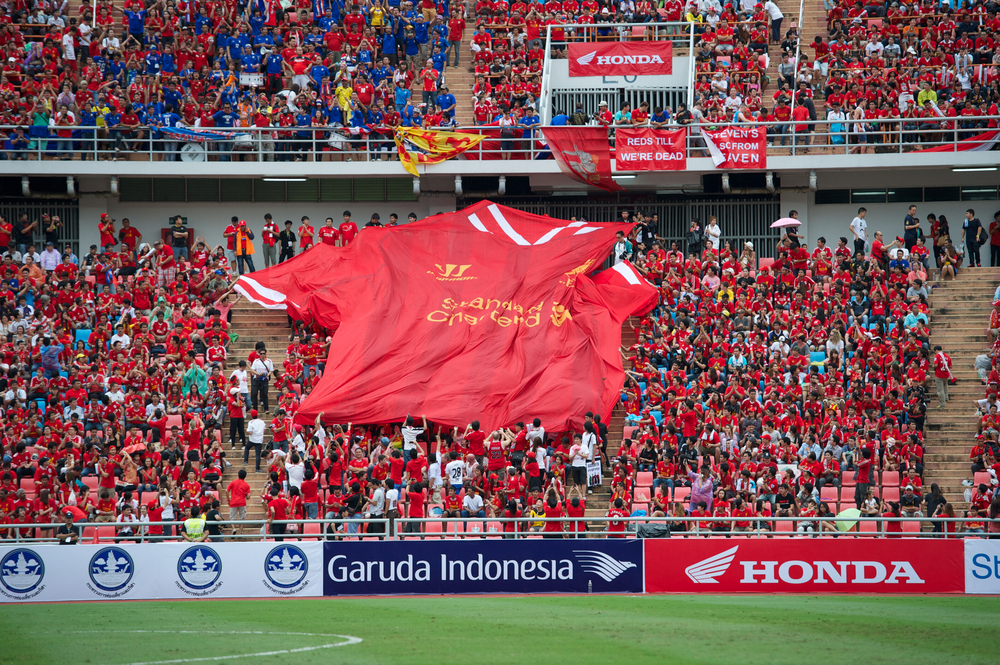 A rare sight of a Bradford woman, sporting a hijab, barracking an opposition player during their victory over Aston Villa at Valley Parade in January 2013 sparked a debate on community cohesion, multi-culturalism but the under-lying theme, that is, a sign of a major increase in participation in football from Muslim women, was missed.

The rise of social media has certainly seen expressive feelings of love for one’s football team uttered by a small but passionate section of Muslim women.

In my own household during the 90s, my mother and sister were bemused bystanders as they watched their sons and brothers respectively sit on the edge of our sofas, glued to the footballing action developing on our screens.

My sister’s interest in football was restricted to her asking when our teams had won or lost whenever they faced each other, usually attached with a slight chuckle at our most distressing time.

Football became the thorn pricking away at the ladies in the house who would rather have tuned into Asian dramas than twenty-two players running around kicking a football but in the end, our passion for it faded away any resentment.

Nowadays, there is a beginning of what one can hope to be a more palpable presence of Muslim women in football, whether it be through participation, coaching , watching or supporting.

It was the tears of Roberto Baggio missing the crucial spot-kick in the World Cup final in 1994 that was the first memory of football for freelance make-up artist and avid Liverpool FC fan, Safina Kauser.

In a household which embraced football, typified by her mother explaining the off-side rule to her uncle during an El-Classico match between Barcelona and Real Madrid, Safina finds enjoyment through the beautiful game.

Whilst she admits her friends would prefer “to go out and paint the town red”, Safina describes the role football has with her mates, saying: “My idea of a great night in is football and pizza. As teenagers, they purchased Smash Hits magazines whilst I’d read Football Italia, Match and Shoot. I think they just accept it but I don’t talk football around them.”

How did she respond seeing the hijab wearing Bradford supporter in the stands in January at Valley Parade? “I found it liberating and it made me smile. We live in a multi-cultural society so why should football be any different?” says Safina.

Her Twitter account background is filled with club crests from across the world and a brief glimpse into other Muslim female fans, sees Twitter accounts decorated with the club they support.

It took the European Championships in 2004 for Sabaa to take a starting interest in football and it manifested itself in subsequent years into support for Liverpool FC and her Twitter background is her re-creation of a picture of the Anfield club captain Steven Gerrard kissing the club crest.

She describes her experiences of being on Twitter and using it as a vehicle to engage with other fans, saying: “I have had many arguments on Twitter over football, mainly with males who think it’s okay to assume that ‘girls only tweet about football to get attention from boys’ which is totally unfair for the majority who actually do love the game. I love a bit of footy banter, though so I guess it’s good to have rival fans follow me too.”

Sabaa plays down the post-match commentary of the hijabi girl in the stands at Valley Parade, adding: “I honestly didn’t understand the whole drama surrounding it since me and my best friend (who also happens to be a hijabi) went to the Bradford City vs. Arsenal game. I just think people hold stereotypical views on Hijabi girls and need to stop being so narrow minded.”

Her thoughts on that have been re-inforced by her own trips to the hallowed arena of Anfield, adding: “It [Anfield] feels like my second home and I feel like we’re part of a big “Liverpool family” as I like to call it.”

Her love for the game has seen her find her physical embodiment of Liverpool FC on the pitch, like many others, in captain Gerrard who as Aroosa would admit, is an “obsessed” fan of the England captain.

The passion for football stands out with the words she uses, saying: “It’s a passion that you have throughout your life. It’s amazing going through the highs and lows with your football team, because sometimes there’s no feeling that compares to it.”

Her interest was mentored nicely by her family, who all took an interest in Liverpool but as Aroosa’s rising passion briefly concerned her family, it dissipated quickly as they all sit around the box, to watch Brendan Rodgers’ continuing identity re-brand of the club unfold.

Having admitted to feeling the magical atmosphere of Anfield during games, Aroosa also weighed into the debate of Muslim women watching games from the stands, adding: “Why does it matter if you wear a hijab or not? Watching football is a passion and a hobby! It was stupid and meaningless. Just shows you how narrow minded people still are in this day and age.”

But a Muslim woman who has actually put on shinpads and boots to actually play the game early on in life, Sara Naseem was inspired to follow football more closely after her beloved Liverpool, managed by Frenchman Gerard Houillier at the time, snared a cup treble in 2001.

Speaking about her early experiences of football, she says: “When I was young my evenings and weekends were spent playing football outside with all the local boys. I was in my high school football team playing every position there is as there wasn’t enough girls to cover all positions!.”

Now, at the age of 23 and kept occupied by a full-time career as a radiographer, she speaks excitedly about the buzz created in the community after newspapers highlighted the Bradford woman passionately backing her team and adds her voice to what more can be done in the game.

“I think engaging in playing is a bigger deal for Muslim women as they rarely play sports. I think clubs need to do more to entice different cultures, ethnicities and females. I try my best to spread the word because it really makes me happy when I meet a Muslim girl into football,” adds Sara.

Justice Or Else: What Role Do Athletes Play In The Movement?