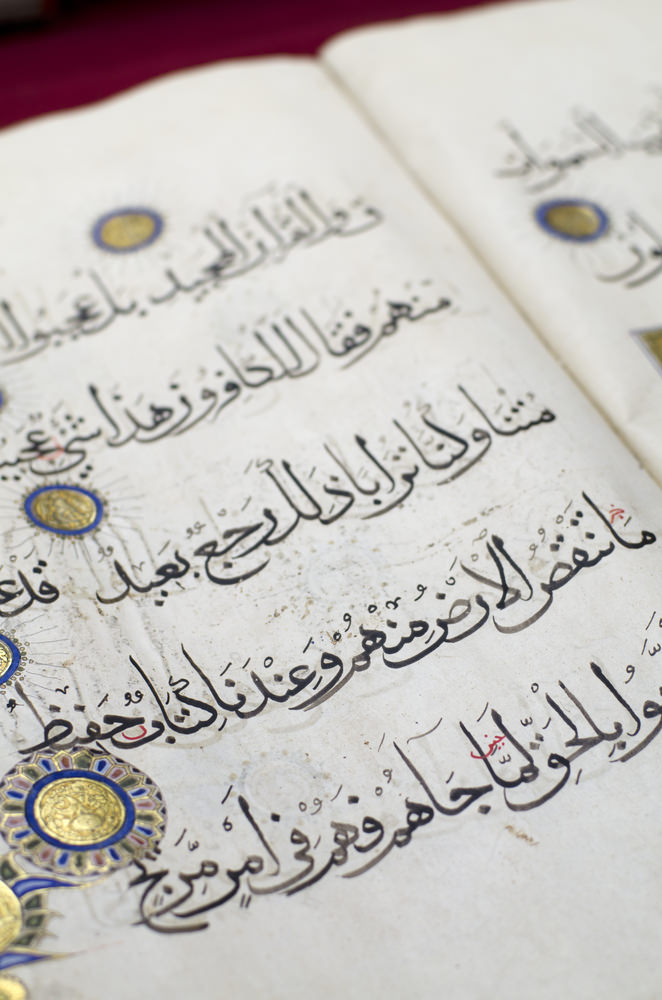 The greatest verse of the Qur’ān is Āyat al-Kursī,[1] as mentioned in the authentic statement of the Prophet

The answer to this question, and Allah

as opposed to the darkness of disbelief. Allah

and his discourse with the tyrant king, Nimrūdh. Verse 259 is the story of ῾Uzayr

when he passed through Jerusalem after destruction had befallen it, and verse 260 is again about Ibrāhīm

when he asked Allah

to show him how He brought the dead back to life. Verse 261 then sets forth a parable about charity.

At first glance there seems to be little connecting these topics beginning with charity, Āyat al-Kursī, no compulsion in the religion, three different stories and ending with charity again. Yet the Qur’ān is never random. Each verse has been placed in its appropriate context and surrounded by other topics which accentuate its beauty and powerful meanings.

In order to appreciate the connection between all of these topics as well as why Āyat al-Kursī is not a chapter on its own, we must first understand the meaning and message of Āyat al-Kursī. Put simply, Āyat al-Kursī speaks about Allah, His names, attributes, powers and abilities. The greatest verse of the Qur’ān is described as being precisely so due to it describing to us our Lord and Creator.

Āyat al-Kursī begin with the essence of tawḥīd; the oneness of Allah

and therefore His right to be worshipped alone. It describes Allah as being Ever-Living, the Self Sufficient Sustainer of all else who is perfect in every way and free of all defects and weaknesses such as sleep and drowsiness. He is the Master of the heavens and earth, before Whom none can dare speak or intercede except by His permission. The One who possesses all knowledge, the Lord of the Kursī, the Most High, the Most Great.

after describing Himself to us, emphasises His power and abilities by mentioning three short incidents to us. All three speak primarily about resurrection as this is the basis of faith alongside tawḥīd, as with it a person realises that all of their actions are being recorded and they will account for them. For this reason, the Prophet

would often say, “Whosoever believes in Allah and the Last Day then…”

In the first incident as mentioned in verse 258, Allah

shows His absolute power in His ability to control the heavens and earth and all elements within it, from the sun and moon, to life and death. It is the story of the Prophet Ibrāhīm

when he stood before the tyrant ruler, Nimrūdh who wanted to debate Ibrāhīm

about the God he worshipped, “Have you not considered the one who argued with Abraham about his Lord because Allah has given him kingship? When Abraham said, ‘My Lord is the one who gives life and death,’ he said, ‘I give life and cause death.’” According to some scholars he displayed this by bringing forth two prisoners, one of which he killed and the other he set free. [3] So Ibrāhīm

responded, “’Indeed, Allah brings up the sun from the east, so bring it up from the west.’ So the disbeliever was overwhelmed…” Thus, as Allah

mentions in Āyat al-Kursī, He is the All-Powerful Master of the heavens and earth, and thereby deserving of all worship alone.

then touches upon another story again showing His ability to resurrect, this time in the story of the Prophet ῾Uzayr

who passed through Jerusalem after destruction had befallen it, as Allah

describes, “Or as the one who passed by a township which had fallen into ruin.” It is said that the city had been razed to the ground and many of its inhabitants killed, and the rest exiled. ῾Uzayr

upon seeing the level of destruction remarked, “How will Allah bring this to life after its death? So Allah caused him to die for a hundred years, then He revived him.” During that time the city had been rebuilt and resettled, and ῾Uzayr’s

drink provisions at the time of sleeping had not changed despite the passage of a century, “And when it became clear to him, he said, ‘I know that Allah is over all things able.’”

The third story goes back to the Prophet Ibrāhīm

, “My Lord, show me how You give life to the dead.’ Allah said, ‘Have you not believed?’ He said, ‘Yes, but only that my heart may be satisfied.’ Allah said, ‘Take four birds and commit them to yourself. Then put on each hill a portion of them; then call them – they will come to you in haste. And know that Allah is Exalted in Might and Wise.”

Thus, all three verses are not just random stories, haphazardly placed here, but each accentuates and further highlights aspects of the power and might of Allah

. Once you understand and contemplate Āyat al-Kursī and further supplement it by comprehending these three stories, you realise how clear and manifest the signs of Allah

are. As such, you realise the majesty of Allah

and His attributes, you yearn to seek His love and pleasure by doing that which He wants and sacrificing for Him. One of the greatest examples of this sacrifice is charity and spending from that which you love as is mentioned in another verse, “You will never attain piety until you spend from that which you love.”[4] Therefore, the passage begins and ends with charity, “O you who have believed, spend from that which We have provided for you before there comes a Day in which there is no exchange and no friendship and no intercession. And the disbelievers – they are the wrongdoers.” Allah

then says in verse 261, “The example of those who spend their wealth in the way of Allah is like a seed which grows seven spikes; in each spike is a hundred grains. And Allah multiplies for whom He wills. And Allah is all-Encompassing and Knowing.”

For this reason, Islam does not require anyone to be forced to enter into this beautiful religion. It is clear for all to see, which is why Allah

says immediately after Āyat al-Kursī, “There shall be no compulsion in the religion. The right course has become clear from the wrong.” “Allah is the ally of those who believer. He brings them out from perpetual darkness into the light. And those who disbelieve – their allies are the false deities. They take them out of the light into perpetual darkness. Those are the companions of the Fire; they will abide eternally therein.”

Therefore, the full scope of Āyat al-Kursī, its beauty and powerful meanings are better understood and seen when studied within the context of where it is placed. As such, the wisdom of Allah dictated that it should not be a chapter, but the greatest verse of the Qur’ān in the midst of Sūrah al-Baqarah.