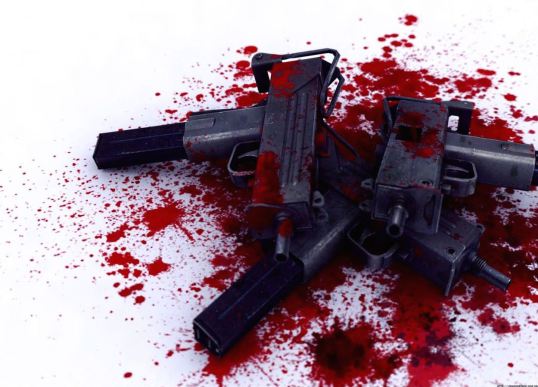 As ISIS continues its murder and violence across the provinces it controls and seeks to control, and as it continues to plague the conscience of the great majority of Muslims around the world, what’s worth recalling is that we’ve seen this before in history with the sect called the Khawarij (anglicized to Kharijites). So before tackling ISIS, let’s look at their forerunners; the Kharajites, to whom their pedigree can be traced.

was distributing charity to a few people whose hearts needed to be reconciled, there came a man with a thick beard, prominent cheek bones, deep sunken eyes, protruding forehead and shaven head. He exclaimed: Fear Allah, O Muhammad! The Prophet

responded: ‘Who will obey Allah if I were to disobey him? Am I not [sent as the] most trustworthy person on earth; and yet you trust me not?’ The man then turned back, whereupon one of those present asked for permission to kill him. But the Prophet

said: ‘Verily, from the progeny (di’di) of this [man] shall come a people who will recite the Qur’an but it won’t pass beyond their throats. They will slay the followers of Islam and would spare the people of idolatry. They will pierce through the religion just like an arrow which goes clean through a prey.[1] 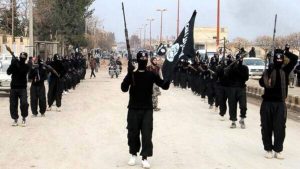 Another hadith records that this man’s name was Dhu’l-Khuwaysirah, from the tribe of Tamim, about whom the Prophet

alerted: ‘Leave him; he has comrades whose prayer and fasting will make your prayer and fasting seem insignificant. They recite the Qur’an but it doesn’t go beyond their throats. They shall pass through the religion as an arrow that pierces clean through its prey such that, on inspecting the head; then the shaft; then the fletching; then the nock, would see no traces of blood or viscera on it whatsoever.’[2] Ibn al-Jawzi said: ‘The first of the Khawarij, and the most wretched of them, was Dhu’l-Khuwaysirah … His problem was that he was too puffed up with his own opinion. Had he been granted grace, he would have realized that no opinion was above that of Allah’s Messenger

. The followers of this man were those who fought against ‘Ali b. Abi Talib, may Allah ennoble his face.’[3]

A few decades after this post-Hunayn happening, and as had been prophesied, Dhu’l-Khuwaysirah’s ideological comrades and offspring took on the shape of the very first sect (firqah) to deviate from the main body of the Muslims: the Khawarij (culled from the Arabic word kharaja – “to go out” or “to leave” the main body of Muslims). Indeed, their very name was mentioned by the Prophet

himself, who said: al-khawarij hum kilab al-nar – “The Khawarij are the dogs of Hellfire!’[4] The emergence of the Khawarij as a sect occurred during the caliphate (khilafah) of ‘Ali, in the immediate aftermath of a civil war and its arbitration at Siffin.

Ibn al-Jawzi tells us: ‘‘Ali returned from Siffin and entered Kufah: the Khawarij did not follow. Instead, they settled in Harura. There were 12,000 of them, and they were declaring: la hukma illa li’Llah – “There is no judgement, except Allah’s.” This is how they initially started.’[5]

Imam Muslim narrates from ‘Ubayd Allah b. Abi Rafi‘, a freed salve of the Prophet

, that the Khawarij came out against ‘Ali, and declared: ‘There is no judgement, except Allah’s.’ So ‘Ali replied: ‘A word of truth, intended for something false (kalimatu haqq urida biha batil).’[6]

Imam al-Nawawi explains: ‘Meaning, the basis of their statement was true. Allah says: The judgement is for none but Allah. [12:40] What they intended by it, however, was to reject ‘Ali’s [acceptance of] arbitration, may Allah be pleased with him.’[7]

As with Dhu’l-Khuwaysirah who, blinded by his warped piety and self-righteousness, thought he had a keener sense of justice than the Prophet

, the Khawarij were also possessed of holier-than-thou pretensions and smug convictions. It is this puritanical, embittered self-righteousness – devoid of any true glimmer of knowledge or spiritual wisdom – that is the hallmark of the Khawarij and their ideological cousins who drink from the same murky theological waters today. Of course, along with such fanatical zeal, their other great infamy was takfir – declaring other Muslims to be disbelievers, and spilling their blood because of it.

The historians al-Tabari and Ibn Kathir chronicle alarmingly precise accounts of their intimidation, violence and terror. Under the events of 37H/657CE they detail how the Khawarij began terrorizing the countryside around Nahrawan, Iraq, subjecting those whom they caught to an imtihan or “inquisition”. If the answers failed to satisfy their zeal for purity, or agree with their understanding of things, then the punishment was death. Things came to a head when they chose ‘Abd Allah, son of an early companion, Khabbab b al-Aratt, as their victim.

A number of the Khawarij rode into his village for supplies and thought to make an example of him. They fired their loaded questions at him. They first asked him about the caliphates of Abu Bakr, ‘Umar and ‘Uthman. ‘Abd Allah extolled them all and praised their successive caliphates. So far, so good. They then asked him about ‘Ali, and his state before and after the arbitration or tahkim. ‘He has far greater knowledge about Allah than you do,’ replied ‘Abd Allah, ‘and has much more piety in terms of his religion and possesses greater insight.’ With that, his fate was sealed. They bound and dragged him and his pregnant wife to an orchard laden with date palms, next to a river.

As they were proceeding to kill him, a date fell to the ground, so one of the Khawarij picked it up and put it in his mouth. ‘Do you do that without the owner’s permission and without paying for it?’ said one of his Kharajite comrades. He spat it out instantly. Another Khariji, wielding his sword in threatening circles, accidentally killed a cow that had been wandering behind him. His comrades insisted he should go and find the owner and pay him the full price of the animal. They waited whilst he did so. Thus, having acted most righteously in the matter of the date and the cow, they slit ‘Abd Allah’s throat and then disemboweled his wife. Date spat out, cow paid for, husband, wife and unborn child butchered; and with the clearest of consciences, they purchased their supplies and went on their way.[8]

: ‘They will pierce through the religion (yamruquna min al-din) as an arrow which goes clean through a prey.’ The idea of maraqa – an an arrow ‘piercing’ or going ‘clean through’ its prey with such force and velocity that it exits its prey without any trace of blood or flesh sticking to its tip or shaft, describes emphatically how the Khawarij immerse themselves in religion, but exit straight through it. The question, however, is do they exit the fold of orthodoxy (and become heterodox, deviant Muslims), or do they leave the actual fold of Islam? A minority of scholars went with the latter view; most went with the former.[9] The majority view takes its cue from ‘Ali, may Allah be pleased with him, who was asked: Are the Khawarij mushrikun? He said: ‘They flee from shirk.’ Are they munafiqun? He said: ‘The hypocrites remember Allah only a little.’ Then what are they? He said: ‘They are our brothers who transgressed against us (ikhwanuna baghaw ‘alayna), so we fought them for their transgression.’[10]

Working Ourselves Out of a Job