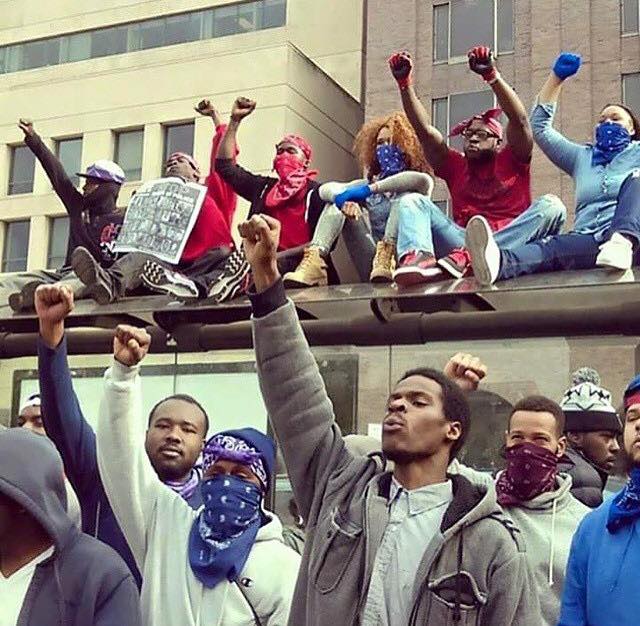 I’m not sure I have the words for what I’m trying to say, but I’m going to give it a try. I don’t speak with any authority or a more valid perspective than you or anyone else. I’m just speaking to you as a human being, your sister in humanity, as we share space on this earth.

Yes, I’m African-American or Black American, depending on the label most palatable or preferable to you. And yes, I was (and remain) in Baltimore during these infamous “riots,” the effects of which I (we) still feel today.

But I’m not a Baltimorian. I came to this area only two years ago, and before that I visited only periodically for community events and to visit friends. And before that, I lived in Saudi Arabia for several years. So I don’t speak with the experience of someone who has always called Baltimore my home. I came here only because the drive to my then job would have been too long a stretch each day.

But this isn’t really about Baltimore, is it? This isn’t about the city made famous by The Wire or, more recently, by the state of emergency declared on national news.

Don’t worry, I’m not going to give you a Black History lesson or try to convince you that you should feel sorry for me. Yes, it’s a bit odd to hear the blaring sirens of fire trucks and police cars a bit more than I’m used to. And it’s a bit inconvenient (and annoying) to have a curfew that is more befitting of a little kid inclined to stay out past dark. And I’d rather not make do with what’s already in my kitchen because the store I frequent was preemptively closed, barricaded, or destroyed.

But that’s not what hurts right now. Because living in concern for my safety—and that of “my people”—is a way of life for me. And it didn’t start in Baltimore, and unfortunately, it won’t end there.

But even so, I’m not going to plead with you to be more disturbed or outraged at senseless murder than you are with the loss of homes and property.

But it’s a worthy plea, so I get it. And it needs to be made. Because there is definitely something wrong with a mindset (or should I say heart condition?) that incites more fury at the sight of burning cars, looting, and angry youth than a trigger-happy neighbor killing an unarmed boy holding Skittles, than a father being choked to death by law enforcement, than a bullet ending an eighteen-year-old’s life, and than a young man dying of suspicious spinal injury while in police custody.

And nope, I’m not going to try to “prove” that a large portion of what is being called the Baltimore “riot” and “uprising” was neither, and that the vast majority of the people who came out of their homes were peaceful demonstrators who were simply trying to shout—from the bottom of their hearts—for their nation and fellow countrymen (police officers and citizens alike) to listen to them, to see them. To stop chastising them for merely existing.

So as I write this, I’m asking you, whoever you are, only one thing. Stop.

Stop. And listen to the heart beating in your chest.

Stop. And reflect on that rhythmic thumping, that perennial countdown to your last breath.

Stop. And reflect on the only guarantee we all have in life.

Now imagine, moments after your soul is seized, asking yourself, “What was all of this for?”

Why am I (or they) so frustrated?

Why am I (or they) constantly debating and arguing with people?

Why are we constantly living in our heads and assuming no one cares?

Why do we constantly think someone else has it all wrong?

Why do we take nearly every dissenting view or alternate opinion as an attack? Or an indication of opposition? Or the justification to just sit still?

Why are we so eager to prove others wrong?

Why do we assume that every solution is either-or?

Can’t someone detest senseless murder and the destruction of homes and property?

Can’t someone support me, my people, and our cause and disagree with us from time to time?

Can’t diverse populations—or even a single “race”—have different approaches and outlooks, yet still strive for the same goal?

Can’t someone make a mistake or say something wrong, yet still “get it” and genuinely care?

Can’t someone be part of the problem and the solution at the same time?

And tell me, as the angels are preparing your Book of Deeds, is there any guarantee that your record will not reveal that YOU are guilty of this from time to time?

But stop “calling out” those who don’t have the same knowledge as you.

If you see a wrong, then speak up.

But stop assuming others aren’t addressing the wrong just because their fight against injustice looks differently from yours.

If you feel that more should be done, then do more.

But stop assuming that you’re the only one who feels this inspiration and urgency.

If you believe in helping the suffering people in the world, then help them.

But stop assuming these people reside only in Iraq, Syria, and Palestine.

And if you want to go to Paradise, then do your part to get there.

, said, “No one who has [even] an atom’s weight of pride in his heart will enter Paradise” (Muslim).

And do you know what pride (kibr) is? It is looking down on people and rejecting the truth.

So if you hear about a Black man getting killed and you think he must have done something to deserve it. If you feel anger and frustration only when some catastrophe hits the people who look like you. If the only “senseless suffering” is on the other side of the world. If you learn about a sudden “riot” or “uprising” in a city, and you think, “They’re just a bunch of thugs.” If you protect your son or daughter (or yourself) from “bad influences” by keeping them away from those people (whoever they are). If you are Black and think you have the right to say who is or who isn’t doing enough—or you think the melanin in your skin gives you the right to justify and defend destruction of homes and property.

So before you post any more about the #BaltimoreRiots or #BaltimoreUprising, first quiet the riot of pride in your heart.

You are merely a human being, a child of Adam—as is every man, woman, and child around you, who share this earth with you. You might think you have something to say to help others. But if it starts with looking down on them, or assuming they don’t care about you, it is better to keep quiet, lest you add to the confusion and injustice in the world.

Because saying or doing “the right thing” always starts with purifying the heart. And purity cannot exist in a heart polluted by pride. You can’t look down on others because they look different from you. Or because they respond to injustice differently from you. You can’t reject truth (for or against your cause) just because it doesn’t fit into your preferred racial or cultural narrative.

At least not if entering Paradise is your agenda of “the right thing to do.”

So no, let’s not talk about thugs and rioters. And let’s not defend destruction of homes and property. And no, let’s not cast aside the greater issue of preserving and protecting the sanctity of human life.

I ask you only to stop.

Stop, and take advantage of this opportunity of life.

Stop, and take to moment to purify your heart.

And before you ask someone to support (or not support) a certain cause, first ask them to join the ranks of the men, women, and children rising up…

To stop destructive pride from rioting and looting the goodness of human hearts.

Umm Zakiyyah is the internationally acclaimed author of the If I Should Speak trilogy. Her latest novel Muslim Girl is now available.

Western Europe and the Ottoman Empire: Trade Across an Inverted Imperial Divide