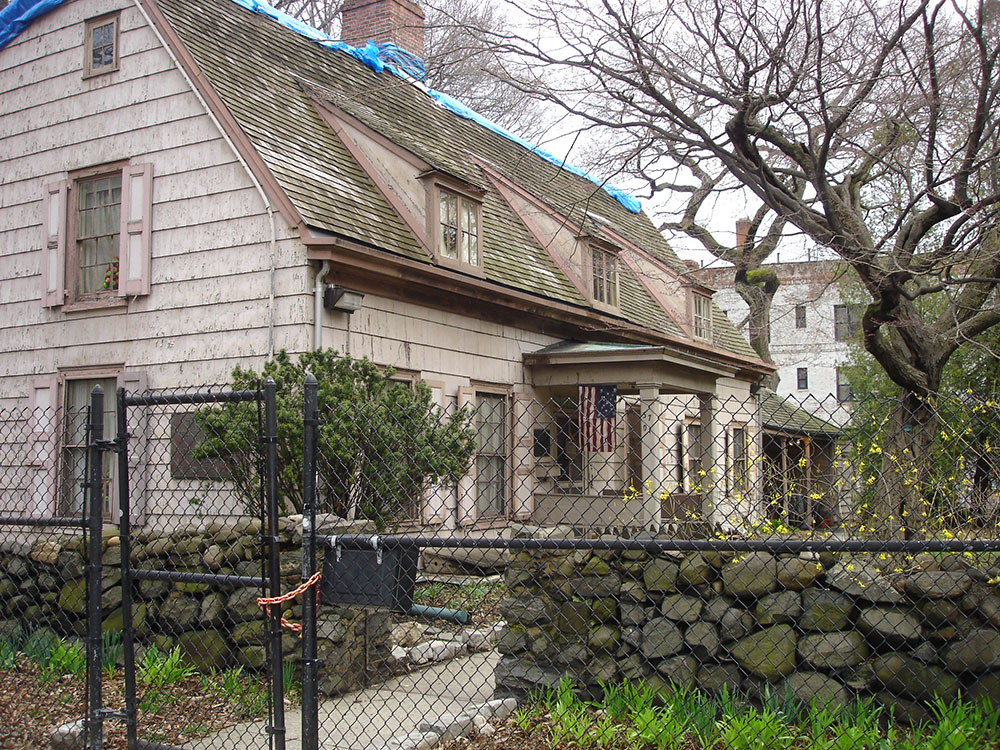 Since moving to Flushing, NY 8 months ago, I have passed by the John Bowne House countless times. The sign outside of this historical monument reads: “Bowne House: A Shrine to Religious Freedom Since 1662”. In 1656, when the town of Flushing was part of the Dutch colony New Netherland, governor Peter Stuyvesant passed an ordinance prohibiting the practice of religions other than the Dutch Reformed Church. John Bowne defied this ban by allowing a group of Quakers to hold religious services in his home. When he refused to accept guilt for his actions, he was swiftly deported to Holland. Bowne successfully argued his case abroad and Stuyvesant was ordered to permit all faiths to worship freely, establishing the principle of religious freedom in New Netherland. [1]

It is ironic that I live a stone’s throw from this beacon of justice, yet have felt apprehensive leaving my home of late due to my outward manifestation of my religious beliefs—a headscarf and ankle-length skirt. My work as a resident-physician entails that I leave my home in the early morning hours and often return after dark. It is soothing to know that Flushing is bustling at all hours and that a person contemplating a violent act against me would be deterred by the presence of bystanders. But it is troubling to know that I think in such a manner when this well-preserved “shrine to religious freedom” stands 4 blocks away.

If I were to consider my newfound apprehension solely in the setting of my personal experiences, my fears would be vastly misplaced. Instances of prejudice directed toward me for my religious beliefs have been few and far-between. And when I have endured them, the reaction of those who may be of help has been swift and effective. I recall being openly demeaned as a sophomore in college by a visiting professor during class. When I received a C- for a subsequent assignment on which I had worked diligently, I could fathom no other motivation for the professor’s behavior but prejudice. I still remember the words he used to explain my grade when I approached him 2 days later: “Your work was far below the level of your peers; your grade should actually have been closer to failing; that may have convinced you to drop this class since you clearly don’t belong here.” Reliving that experience, now 7 years old, is still traumatic. But the rest of my memories connected with this incident are fuzzy; positive experiences are always harder to recall than the negative. I recall heading to my advisor’s office in tears and explaining the situation. I recall speaking with the university’s Muslim chaplain and trying to make sense of what had just happened. I recall over half of my classmates offering to speak in my defense when they heard of my grade. I recall digging out my father’s 1980s tape recorder and hauling it to my next class, ready to store evidence. But neither my classmates nor my antiquated cassette tape were needed; within 2 days my assignment grade was changed to an A-. I learned soon after that my situation had been explained to the Dean, who had spoken with my professor. What I remember of the outcome of this incident is my well-deserved A in the class and my dean’s assurance, citing my service activities within and outside the school, that my presence within his college was more valuable to him than one visiting professor’s.

My dean judged me, and I am grateful to him for it. His judgment, based on my academic record and personal activities, taught me that it was safe to showcase my faith, as justice would be served should prejudice arise. I was the student who cited a Qur’anic verse in her medical school application essay as a motivation for my career choice. While a medical student at a historically Jewish institution, our annual Fast-a-Thon, organized by students of various faiths in commemoration of the charity encouraged during the Islamic month of Ramadan, was known to be a main source of funding for our student-run free clinic. I refused to hide my research on end-of-life care of Muslim patients in my residency application, and ended up matching into a top-tier institution in the deep South for the bulk of my training.

My experiences have taught me that I am safe and welcome in this country, that my rights will be upheld, and my judgment will be based on my character and the actions that I bring forth. But recent events have swayed this thinking. When it took the U.S. President over 2 days to condemn the brutal murder of 3 openly Muslim students in their home in North Carolina and begin an investigation into its motive, one starts to question how much such bright souls matter to our country’s fabric. When all the news could talk about for days after the event was a parking dispute, inherently placing some blame on the victims for their own execution, one wonders how much their actions and character factor into their judgment. In my comparatively-insignificant incident of prejudice, the response of those with authority shaped my reaction to such hate into something exceedingly positive. Unfortunately, a tragedy which has affected millions of Muslim-Americans is not being moved along such a trajectory.

I thank the news networks that have since portrayed Deah, Yusor, and Razan as the giving souls filled with potential that they were. I don’t listen to the bigots who, amidst this calamity, have called for more murders of Muslims and have told my community that we do not belong in the USA. I was taught 7 years ago how to judge my own worth and know that it has not dwindled. It is estimated that 10% of US physicians are Muslim [2]. Pursuant of a career path fueled by self-sacrifice, I wonder how we can be thought to not belong in the country whose fellow citizens we selflessly serve. To the zealots who claim so, will we belong here when your heart stops beating and we are the doctors who pump your chest to help bring it back? Or perhaps at a time of tragedy when it is a doctor wearing a headscarf who stabilizes your injured child?

I am an example of how the USA can uplift its minorities with a sense of belonging and thereby benefit from our potential. With my religion as a driving force behind my good actions, I believe there is much that I can give to my country and its citizens. It is said that John Bowne’s Quaker home served as a part of the Underground Railroad and helped many slaves to freedom. Those who shared his faith are known to have played an instrumental role in abolishing slavery. Imagine an America where Governor Stuyvesant’s ordinance against religious freedom was upheld, an America without a Quaker legacy. We cannot know the potential lost when a group of people is subdued and made to feel that its contribution is unwanted. Rather, we know that the possible input of a million people fueled by a spirit of giving to a country that upheld their rights and encouraged their advancement is infinite.

Keeping Our Brothers And Sisters In Islam

Everything You Ever Wanted to Know about Intimacy for Muslim Couples