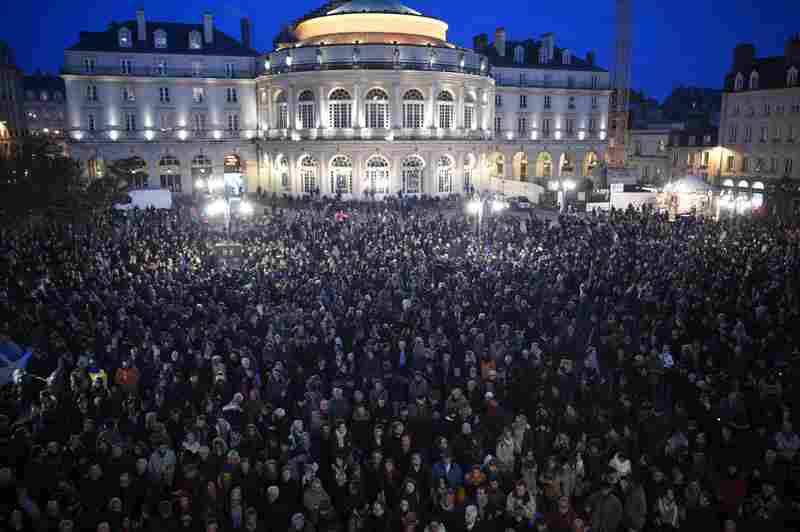 was verbally abused and physically harassed multiple times in Makkah. Never ONCE did any of the Companions go and murder those who did such deeds. And even for those who believe that the penalty for blasphemy should be death: by unanimous consensus of ALL the scholars of Islam, this must take place after a legitimate trial, by a qualified judge, appointed by a legitimate Islamic state. Under NO circumstances does Islam allow vigilante justice, for to open this door leads to chaos, confusion and bloodshed.”

“What is more insulting to the Prophet

than satirical cartoons are those who murder innocent people in his name.”

“‘And We have sent you not (Oh Muhammad) but as a mercy to all the worlds’ [Quran 21:107].  Innocent people were killed including a Muslim cop, the cartoons you supposedly hated are now published in millions of papers, Islamophobia is now even more widely accepted, Dawah efforts set back immensely, a‪#‎KillAllMuslims hashtag, Mosques being attacked in France and elsewhere, hate crimes against innocent Muslims and even “Muslim looking” people, and of course this was all conveniently as France was debating recognizing an independent Palestine. And you extremists are proud of these actions? Good luck facing your Lord with all of the above on the Day of Judgment.”

“It is indeed the harshness and obstinacy of some overly zealous Muslims, combined with the absence of mercy in their hearts, which is driving people out of Islam and deterring others from considering or even respecting it. They are conducting themselves based upon some misguided adherence to their understanding of Islam. They are uncertain in themselves, and so they feel threatened by anyone who might differ with them; through fanaticism, they attempt to protect themselves from doubt but result in only obscuring their view. Fanatics are blinded by the light of God as opposed to guided by it. The Prophet, God’s peace and blessings be upon him, warned of these people when he said, ‘Perish they who go to extremes.’ We should try our utmost not to be one of them”

“Someone might ask, ‘They kill and attack innocent Muslims, so why can’t we retaliate the same way?’ The answer is because we’re Muslims. We have been given the gift of the Quran and the Sunnah and that comes with responsibility. We don’t get to respond to ignorance with ignorance. We must rise above. We have to set the standard. We have to raise the bar of what people expect of us and themselves.”

“What happened in ‪#‎France at ‪#‎CharlieHebdo was Barbaric, criminal, sinful, Haram, murder, inhumane, disgusting, disturbing, unconscionable & a perversion of the teachings of the ‪#‎Quran & ‪#‎Islam ‪#‎NOTinMYName”

“#CharlieHebdo might have tried to mock the Prophet, but the killers have mocked the entire religion of Islam.”

Summary: There is a reason for double-standards and Muslims need to stop feeling guilty for what we didn’t do.

Summary: The ‘freedom of speech is sacred’ narrative only applies to speech against Islam/Muslims.

Summary: It isn’t always what it appears to be.

Summary: Know your enemies and the hypocrites among you.

Summary: It is almost never religion, but other factors that motivate extremism.

Summary: Setting up this narrative is not only unhelpful, but also dangerous.

MuslimKidsMatter | What Should Muslim Kids Do After a Tragedy