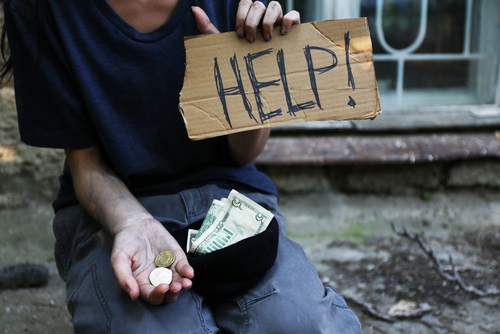 A woman in her 30s in a headscarf hails the worshipers as they leave Eid salah. Feeling a curious mix of guilt and joy, most don’t hesitate in handing over some money. They have cash in their pockets and purses today, expecting to give it as gifts to the children in their own families.

Some have not paid their Sadaqah Fitr [charity due before Eid Salah] and jump at the chance to give it in person. The woman looks like she is in need, she also knows the right things to say.

From New Orleans to London, beggars have become a part of the Eid and often Jumuah prayers. A set of seven or eight were outside a large East Coast masjid, says Sarah S., who was visiting family. Some are visibly Middle Eastern or from the Indian subcontinent, and many are supposedly Romani, often holding index cards asking for money.

The worshipers at a local Islamic Center were also targeted by a group of women and children, who would be dropped off by a man in a white van. They had been coming for years.

In the past the board of the center politely requested that they stop begging and fill a zakat form. They refused and eventually admitted that they were not Muslim. “[This Ramadan] I chased them out,” says Ibrahim Zuberi, Director of Communications at the center. He told them that they have to leave immediately or the center will call the police to report trespassing.

According to a documentary made by the BBC, in the United Kingdom gangs dress women and children in modest clothes and headscarves, despite not being Muslim. [Update: Read Qristina’s comment below on Romani culture and dress which includes loose, long clothing and headscarves.] They know that giving to the poor is a religious tenet and that is why the beggars single out ‘wealthy’ Muslims, say the documentary makers. They target masajid and areas popular with rich tourists from the Gulf States and their minders collect all the funds at the end of the day.

Kimberly H. has encountered some beggars around the DC Metro area. “It burns me up that they’re likely just taking advantage of the generosity of certain brothers and sisters at Eid. Last year, a woman followed her into a store and asked her for money (after giving a perfect salaam),” she said. Hutchins did not fall for it as her suspicions were raised.

She saw the same woman at the area wide Eid salah last year, where she begged her for money. “I told her, game’s up, you asked me for money a few days ago. Not this time, either,” Kimberly chastised her.

Kimberly says she had a horrible feeling that the woman was working a ‘job’ and could be part of a human trafficking gang. “If I know what I know, and I could be wrong, this is their job, they are sent out by [a] pimp-like man to do this every day and they give him a cut [or] all of what they make begging,” she shares.

Kimberly’s hunch could be correct. Malika Bey-Rushdan, Director of ICNA Relief Boston, sent a warning in an email to ICNA donors during Ramadan, “Many of you have seen the Romani women outside your masjids begging for money – this is a network of Romani people (gypsies). They are not in need!! They are dropped off at the masjids and picked back up after the prayers; often by [men] in very nice cars. Beware. They are taking advantage of your generosity.”

Bey-Rushdan suggests people educate themselves about beggars, as many of the women and children are victims of trafficking.  “The best thing to do is contact the authorities,” writes Bey-Rushdan.

Young children in hijab are used to wheedle hearts and then all the money collected is taken away by their minders. The manipulation of using babies and kids on the corner on the occasion of Eid also offends Hutchins, a mother of young children. “Everything about it screams ‘wrong’.” She felt uncomfortable that they find Muslim places of worship and have acquainted themselves enough so that they can “blend”.

Myths and Tropes about Romanis

There are many myths and tropes about Romanis that further complicate matters. Needless to say, not all Romanis are criminals or beggars and some are Muslims. They have a horrific history of persecution in Europe; many were enslaved until the mid-1800s in Romania after they left the Punjab region of India as early as the 11th century. More than half a million were murdered by the Nazis during World War II.

They distrust governments that persecuted and forcibly assimilated them, took away their children and sterilized them, and forced them to adopt a nomadic lifestyle that is considered unconventional, partly to preserve their heritage. Even though there are roughly one million Romani Americans, many who are non-nomadic, anti-Gypsy laws have been in effect in the United States until 1998. You read that right.

Historically, they have been banned from owning property in the countries they settled in, barred from many professions, and not given the opportunity to get an education. Because of this, they end up in marginal professions.

They are seen as callous trouble-makers, who don’t care for their children, leading to severe racial prejudice. According to writer Isabel Fonseca, who spent four years researching Gypsies, “Gypsy women, whatever the earnings of their husbands, are ultimately charged with supporting and feeding their children.” They do not let anyone take care of their children, except family and friends. So to think that all Roma would willingly give up their children to become beggars— or worse sell them —is simply dehumanizing them.

‘Gypsy’ kidnappers are also a myth that has been used for centuries to other this oppressed minority.

Many Romani think the term gypsy itself is an ethnic slur and do not wish to be called by it (the term ‘I got gypped’ also stems from this same racial bias). Their entire race is looked upon as criminal and so they are treated as a ‘lower race’.

In general, begging or duping people is a universal phenomenon which cannot be confined to one race.

Many people wonder if the beggars, Roma or otherwise, are really in need, are doing this as a job or are being forced into panhandling. They feel bad for beggars in general and recall the hadith:

“Do not turn away a poor man…even if all you can give is half a date. If you love the poor and bring them near you…God will bring you near Him on the Day of Resurrection.” Al-Tirmidhi, Hadith 1376.

Give a little if you wish or don’t if you would rather not- but beware of dehumanizing people who maybe already going through harsh circumstances.

The best way to make sure your donations get to someone in real need is to give it person to person through trusted family, community workers, through international organizations, or to local Muslim charities.

said, “It is better for anyone of you to carry a bundle of wood on his back and sell it than to beg of someone whether he gives him or refuses.”
(Bukhari and Muslim)

We Are All Being Tested