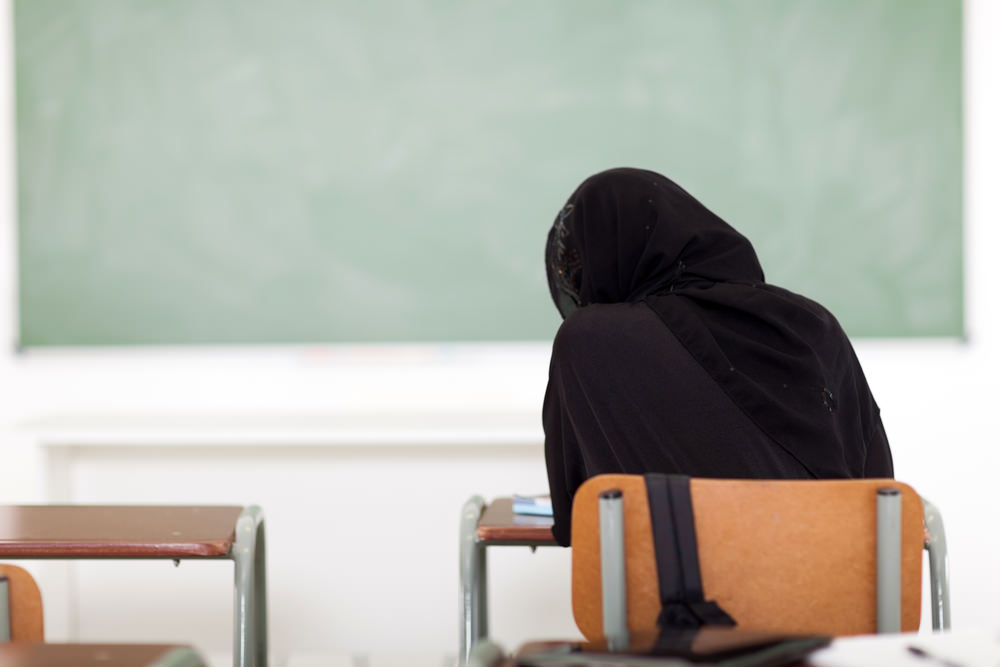 A Cry for Help

I have a question and I really don’t know where to turn. This is something I can’t even talk to my parents or friends about, so I hope you can help me. I am a 19-year-old Muslim girl and I’m sexually attracted to other girls. Please don’t judge me. I know it’s not right to act on my feelings and so far I haven’t, alhamdulillah. But I come from a good Muslim family, and now I live away from home for college and it’s getting more & more difficult to stay away from sin. I’m part of the MSA (Muslim Student Association) & I tried to bring up this topic once (without telling them it was about me); and the Muslims got all upset & some people started making jokes about “It’s Adam and Eve, not Adam and Steve.” And I was just asking what someone with these feelings should do to stay away from sin. I didn’t say homosexual acts are okay! Now I’m getting really depressed and feel so alone. I’m even starting to question my faith. I mean, why can’t Muslims with gay & lesbian feelings get advice or help when Muslims have no problem giving advice to Muslims who don’t wear hijab, who drink, who commit zina, and even Muslims who don’t pray! Do you know of any online resources or support groups for Muslims I can join anonymously? I don’t want to lose my faith. Please help me. –Don’t want to be Gay Muslim

This is an example of the type of questions I regularly receive from Muslim youth wanting advice.

How Can We Help?

Undoubtedly, any Muslim who reaches out for help in practicing his or her faith deserves not only help and guidance, but also patience, compassion, and empathy. No believer should be shamed or blamed for simply wanting advice in fighting sin, whether that sin is major or minor, normal or abnormal. None of us is without sin. Prophet Muhammad, sallallahu’alayhi wa sallam, taught us that all of the children of Adam sin, and the best of those who sin are those who constantly repent.

Therefore, as we strive for Paradise, we should help each other in our efforts of repentance, even if the sin is shocking or repulsive, as homosexuality is to many people.

Ironically, one of the greatest barriers to helping Muslims like the nineteen-year-old Muslim girl above is the alleged fight against homophobia. Literally, homophobia means an irrational fear of or paranoia regarding homosexuality or homosexuals. However, socially and politically, homophobia has come to mean anything that offends gays and lesbians, specifically those gays and lesbians who either reject God and religion altogether or those who wish to remake God and religion in their image.

Unfortunately, the latter group now includes professed Muslims. Some of these Muslims identify with a gay or lesbian orientation while others are merely silent (or vocal) supporters of “the cause”—whose primary goal is to dismantle the moral teachings of the Qur’an under the guise of “new interpretations.”

In the Qur’an, Allah discusses the stipulations of nikaah (Islamic marriage):

However, one lesbian blogger who professes to be Muslim claims that Allah’s instructions are outdated. “I think the concept of nikkah is largely outdated,” the lesbian blogger told me in an email.

She went on to say that Islamic marriage is, for all intents and purposes, a reprehensible financial transaction that involves selling and buying a woman’s sexual organs, a concept that is inferior to her homosexual “marriage”

In the fiqhi discussions, the nikkah contract at its most basic is one whereby the husband purchases with the mahr access to the wife’s sexual organs usually from one of her male relatives. This is why this is little discussion or understanding of marital rape or the wife’s right of consent before engaging in sex with her husband. This concept of purchasing or a contract stipulating access to a spouse sexually is anathema to the relationship I have with my wife. Our marriage is based on more egalitarian principles of mutual love, support and commitment.

Interestingly, this explanation utilizes the same approach used by Islamophobes, wherein they describe praiseworthy Islamic concepts in reprehensible terms to make their “alternative” appear not only logical and justifiable, but also more desirable than anything offered by Allah in Islam.

Clearly, this view is not indicative of a Muslim’s “gay struggle,” wherein one struggles with gay feelings but merely needs support and empathy from believers in striving against temptation to sin. Rather, this view is indicative of a “gay agenda” designed to dismantle Islamic teachings altogether.

As we seek to be supportive and empathetic with Muslims struggling with homosexual desires, it is important that we don’t mistake a gay agenda for a gay struggle. The former is a path to kufr (disbelief) while the latter is a path to tawbah (repentance).

Is a Gay Orientation “Natural”?

In her email, the lesbian blogger argued, “God created us perfectly, irrespective of orientation.” She also said that “a person’s sexual orientation is not a mistake, sinful, or something to feel ashamed about nor hidden or suppressed.”

Put simply, if we can blame Allah for our ongoing struggles and desires in this world, we are allegedly absolved of any responsibility for following His laws in the process.

This is an interesting argument given that not a single one of us controls the tests we are handed, only how we respond.

If we use the blogger’s definition of orientation (an underlying consistent sexual desire that the person himself/herself did not choose), then we have to recognize that there are people who have an underlying “orientation” toward animals, inanimate objects, and even children—orientations that they too did not choose. Thus, if we remove acts of homosexuality from the category of sin based on the consistency of the underlying sexual desire beyond one’s control, then we must accept that a host of sexual desires can be acted on without falling into sin.

In other words, if you believe homosexual acts are not sinful but you apply the condition of “consenting adults,” then you are agreeing to the same principle that rules homosexual acts as sinful in the first place—that, ultimately, morality trumps desire. The only question is: What is your definition of “morality”?

Muslims, like Jews and Christians, recognize only one ultimate authority in defining morality: God. Thus, any underlying “nature” is irrelevant in discussions of sexual morality. Although many Muslims (as well as Jews and Christians), argue that homosexuality is “unnatural,” this is really a moot point as far as the religious concepts of sin and obedience are concerned.

Islam, as a general rule, is most concerned with sinful acts, not with the underlying desire itself, irrespective of whether or not the desire is rooted in nature (i.e. a man and a woman sexually desiring each other) or a perversion of nature (i.e. a person desiring sexual relations with an animal).

However, viewing certain desires as unnatural (as some desires certainly are) is helpful for those seeking to understand and subsequently root out their perverted desires. But, in the context of religious morality, the categorization of the sexual desire as natural or unnatural is irrelevant when discussing sinful behaviors.

When We Betray Those We Can Help

When we choose the latter approach, we are betraying those whom Allah

has entrusted us to help.

Whenever we are given both emaan (Islamic faith) and a severe trial, it as if we are being given an answer key along with a test. And if we are able to share with others the lessons we learn during our tests in life, we are offering a hand to others with struggles like ours. In fact, as believers we have a responsibility to help others during our brief sojourn on this earth, especially if Allah has equipped us with both the life experience and the Islamic knowledge necessary to help others remain on the right path.

I just wish there were more experienced, knowledgeable people to help Muslims like the nineteen-year-old Muslim girl struggling with lesbian desires, help that strikes a balance between not judging her for her struggle and not inviting her to effectively indulge in the very sin she is crying out for help in fighting.

…Or inviting her to leave the very faith she wants to hold onto by encouraging her to replace her gay struggle (a path to tawbah) with a gay agenda (a path to kufr).

Umm Zakiyyah is the internationally acclaimed author of the If I Should Speak trilogy. Her latest novel Muslim Girl is now available.

Related Reading: From our What’s the Matter Counselors Attracted to Same Sex

Top Five Misquotations Of The Quran