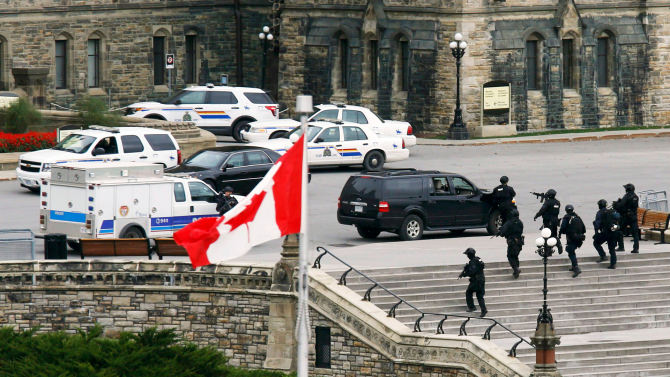 Canadians are still recovering from the horrific shootings which took place in Parliament Hill last week. There’s a lot that can be discussed as we try to make sense of this tragedy; much has already been said: the potential motives of shooter Micheal Zehaf-Bibeau, the growing trend of lone-wolf terrorism, the commendable news coverage by the CBC, the contrast with the attacks in 1984 or the need for better support structures in mosques.

One area which I believe deserves mention is the response of the Muslim community in the wake of these events, and more importantly, the need for reevaluating the reactionary attitude taken by Muslims in such circumstances.

Canadian Muslims went into ‘panic mode’ soon after the shootings made headlines on news networks. Statements of condemnations were released immediately by all major Muslims organizations ranging from the National Council of Canadian Muslims (NCCM) to the Canadian Council of Imams. Friday sermons of the week were dedicated to addressing terrorism across the country and we were told repeatedly to report any ‘suspicious’ activity. Mosques beefed up security and braced themselves for a backlash; some Muslims felt too embarrassed and fearful to face fellow Canadians the next day.

All this took place at a time when we had little information about Bibeau; early reports weren’t even clear on whether the shooter was Muslim, some alleged he was a recent convert.  A clearer picture later emerged of a deeply troubled man with serious mental issues, a drug-addiction and a well developed criminal history. So unstable was his state that his mother suspects this rampage could have been him lashing out at the government for delaying to issue his passport for travel to Saudi Arabia – not Syria, as earlier reports claimed.

It was also found that Bibeau had no links to ISIS or other organized militants – he was a lone-wolf who acted alone. This became quite evident when video surveillance of the attack was released; he appears in it very much like a character from the violent video games he used to fervently play. Islam did play a role in the shooter’s life, but early reports suggested his faith was merely incidental.

As expected, right-wing Prime Minister Harper immediately framed the shooting as a terrorist attack to advance his pro-war agenda and strengthen terrorism laws that sacrifice civil liberties. When Justin Borque killed three RCMP officers this summer for being ‘government officials’, the PM never bothered with any such measures of course. However, by Muslims also releasing pre-mature condemnations of terrorism and apologizing after every such event, are we not enabling false narratives and inadvertently linking ourselves to the attacks?

The reactionary attitude of Muslims in Canada has followed this same pattern with other high-profile cases such as the Toronto 18 and the Shafia murders; the latter of which wasn’t even terrorism related. This is strategy is not specific to Canada of course. We saw a similar response in Norway after Andres Brevick shootings, in the US after the Fort Hood shootings and in Britain after the Woolich murders.

Ottawa’s Muslims should be commended for maintaining a strong public presence following the shootings; it was clearly needed and solicited powerful emotions. My goal is not to question the obligatory public relations exercises Muslim organizations have had to do post-9/11. I believe that the atmosphere necessitated it and I am glad our leaders stepped up to do so – we are heavily indebted to them.

But how much longer are we to continue doing this? How can we live as a healthy community if we become overwhelmed with guilt and fear every time a lunatic decides to commit a barbaric crime? How much longer should we pander to the unfair expectations laid out for us to meet?

It is evident that ‘Islamic’ fundamentalism and global jihadism aren’t going anywhere, Western military intervention in Muslims lands isn’t coming to an end, and neither will these instances of ‘home-grown’ terrorism come to pass anytime soon. As a part of the cultural tapestry of this nation, we have to come to terms with the fact that there will always be someone from our faith, somewhere, committing abhorrent crimes. We need to be in a mode of existence which is aware and cognizant of that; not one that freaks out and is guilt ridden every time it happens.

A decade of condemning terrorism and participating in public relation exercises has done us little good. The events of this past summer have put us back to square-one; our image in the public eye is the same as it was on 9/11 – arguably worse. Our current strategies have clearly failed; it is evident we need to take a new path forward.

For starters, we need to stop thinking like immigrant minorities and demand that people treat us like we belong here. On a day following some national tragedy, or any day for that matter, we must firmly stand up to anything that falls short of dignified treatment—instead of bracing up for hate speech or snide remarks at the office. When we do encounter hate crimes, we too have to be strong and recognize that the perpetrators represent a fringe minority – instead of becoming disillusioned with society at large.

We must start holding others to a higher standard and assume they’re also intelligent enough to distinguish fringe Muslim extremists from the normative majority. If they fail to do so, we need to strongly point out their lunacy – instead of getting into apologetics. We can no longer entertain ludicrous questions about whether we condone honour killings, FGM or domestic violence – would a catholic ever be asked whether they condone pedophilia and child molestation?

We shouldn’t be surprised when we see ‘social experiments’ of people standing up for Muslims – it is assumed that civilized people anywhere would defend an innocent bystander; shame on them if they don’t. We need to stop obsessing over how others perceive our faith and focus instead on how we are treating them.

We need stop issuing condemnations of terrorism and declarations of heresy when our fanatical brethren have run-ins with the law. Like other faith groups, we should instead offer public prayers, statements of condolences and expressions of solidarity. We must express equal outrage when people outside our community commit heinous crimes – not doing so hints at our disingenuousness and self-interest.

Malcolm X hit a turning point when he stopped seeing himself as a member of a maligned minority. He took his dignity into his own hands and refused to be at the mercy of the opinion of others – ‘ni–er’ became a slur too small and meaningless for him. Western Muslims need to collectively do the same. We need to get over our insecurities, stop pandering to the double standards others have constructed for us and demand our place as full-fledged citizens of this society.

Waleed Ahmed is a Canadian Muslim writer and activist based out of Toronto.