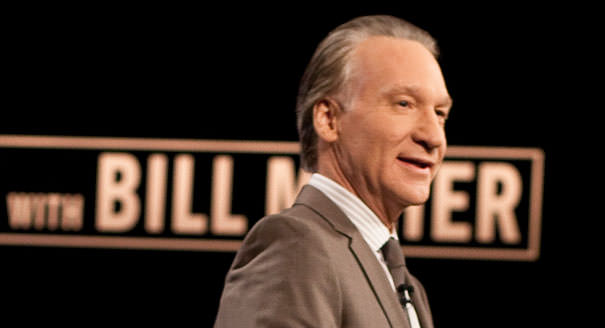 Bill Maher is once again on his tirade against Muslims. For a standup comedian who’s made a living out of mocking all things sacred, it’s hard to understand why anyone would believe the misinformation he spreads. His vitriol against Muslims and Islam are well-known; he has declared quite openly that he’s alarmed with a growing Muslim population in the West and fears a ‘take over by Islam’.

Maher pretends that he’s labeled as a racist for being a simple critic of Islam. Any honest observer, however, would recognize that he has a clear track record of launching baseless attacks on Muslims. He does this repeatedly by misconstruing facts, making unsubstantiated claims and cherry picking radical interpretations that support his pre-conceived notions of the faith.  Couple this with his condescending attitude and vile speech and you’ve got yourself a text book case of bigotry.

Take for example, his recent claim that ‘vast numbers of Muslims around the world believe that humans deserve to die for merely holding a different idea, or drawing a cartoon, or writing a book, or eloping with the wrong person’. Maher makes these profoundly inaccurate and unsupported statements and passes them as facts on national television with no consequences.  This isn’t mere criticism – it is a clear attempt to incite xenophobic sentiment with the intended goal of demonizing Muslims.

Maher often states there are ‘polls’ and ‘research’ to support his view that large swaths of Muslims are a violent and intolerant people – it’s not just a few bad apples he argues. Actual research, however, has repeatedly shown that Muslims overwhelmingly reject violence; in fact they are more likely to oppose violence than other religious groups. As for religious freedom, Muslims yet again show near perfect support for it.

Another example of Maher’s flagrant misconstruction of facts was on the recent flare up with Ben Affleck on his show. He again tries to give us the impression that Muslims are largely an uncivilized people by quoting a Pew poll which supposedly states that 90% of Egyptians support the death penalty for leaving Islam. The Pew poll he’s referring to is most likely the 2013 edition- and he forgot to mention one important piece of information: the poll offers no direct statistics on Muslims who support capital punishment for apostasy.

Instead, the poll offers statistics on people who support such apostasy laws as a percentage of those who support the adoption of Shariah as the official law of their country. It excludes Muslims who prefer to restrict the Shariah to the private sphere, who are opposed to the idea of a theocratic state or those that don’t have strong views on the subject. As a result, the numbers are misleading since the sample population for the survey doesn’t represent the total population. When this is taken to account through extrapolation, the poll actually indicates that as a whole, most Muslims oppose penal codes for apostasy – something Ben Affleck deduced from common sense.

Bill Maher quotes the disproportionally high numbers for Egypt that stand out from the survey – as if the country represents the entire Muslims world. In fact, the numbers he mentions are completely wrong since the poll never offers figures for the country’s complete population. Even if they were to be extrapolated (which introduces an error), the support would be at 64% – not the 90% he so forcefully claimed.

Maher also fails to mention the significant disparity Egypt has with other Muslim majority countries on this issue: Indonesia (13%), Lebanon (13%), Tunisia (16%) and Turkey (2%). Why single out Egypt and not mention the world’s largest Muslims country, Indonesia? Clearly, Bill has an agenda to make overarching simplifications about Muslims that are rooted in nothing but misinformation.

As an aside, an important question to consider is that why it’s only Muslims who seemed to be polled on such controversial questions? What would the stats be if similar question were posed to Israeli Jews, Christian Arabs, Indian Hindus, Catholic Filipinos and American evangelicals? If you ask questions outlandish enough to any population, there’s bound to be support for it from a particular segment. More importantly, to what extent can we use polls to understand a population on such matters? These are important questions to consider.

Despite the contextualization I’ve offered to Bill Maher’s lunacy, one would argue that sizable Muslim minorities still support apostasy laws and this doesn’t explain the main grievance. I think that’s a fair point and agree that the contentious issue of these penal codes still needs addressing by Muslim scholarship. How is traditional Muslim governance to adapt to the modern nation-state? What is the relevance of exacting classical penal codes when they are unable to uphold justice and their implementation leads to more harm than good?

Muslims are working through these issues and these need to be addressed from within; Tariq Ramadan’s moratorium call is an example of this. There’s no denying that the Muslims world is facing a multitude of problems, but mocking these from a Hollywood studio is not going to get us anywhere, unfortunately.

Bill Maher has no interest in actually understanding problems or offering solutions – he’s an entertainer, and bashing Islam makes for very good entertainment. His formula is to take problems from one part of the Islamic world (or concoct them), exaggerate them greatly and then use it to dehumanize the global Muslim population. He caricatures an entire people with brush strokes of prejudice, using the ink of intolerance and his canvass of hypocrisy.

And his solution to problems of the Muslim world: abandon your faith, adopt sexual promiscuity and you’ll be liberated. Clearly, Maher is a professional jester – it’s a good trade for him, and he should stick with it.