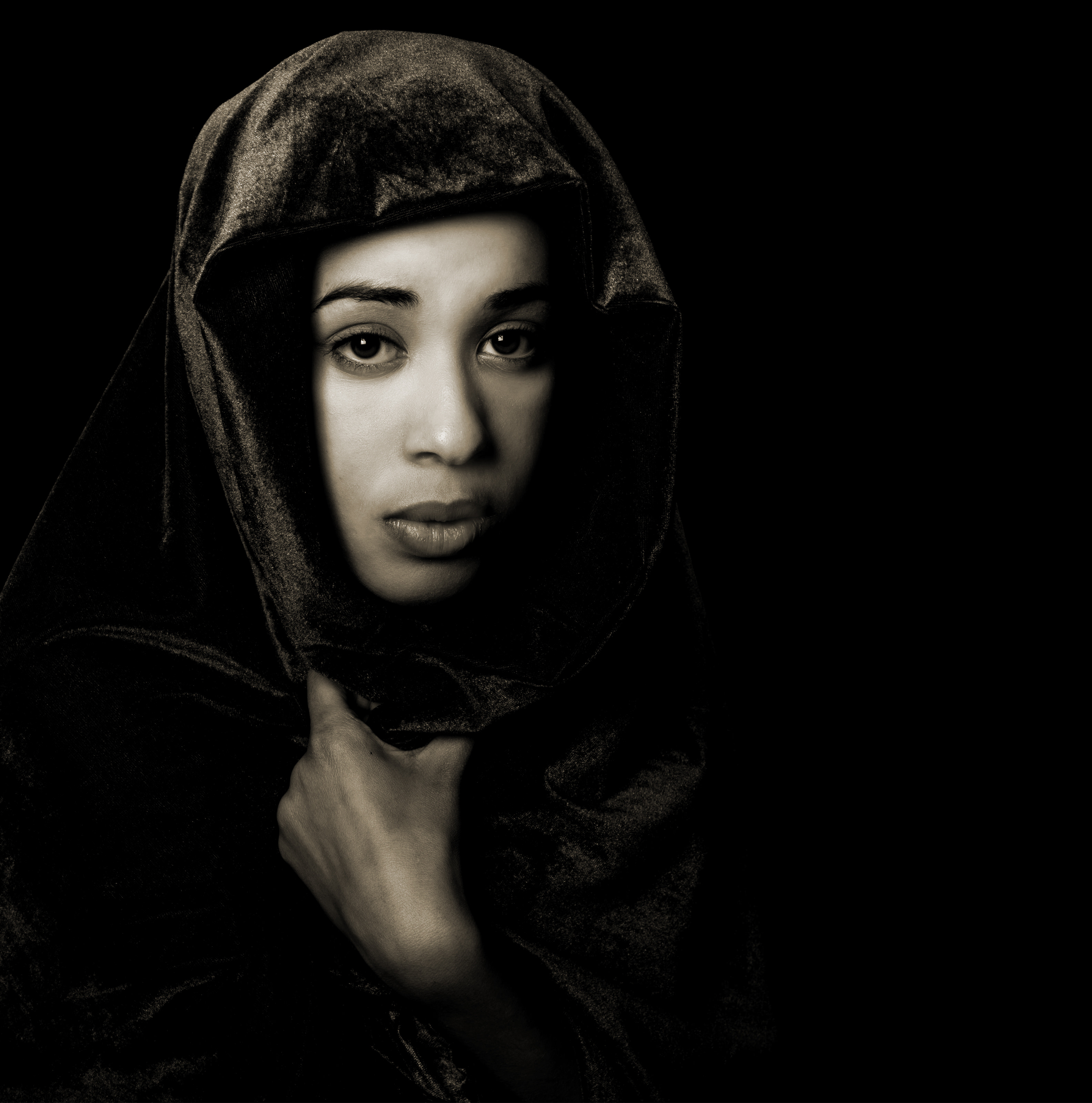 Inaya is sixteen years old. She’s memorized Qur’an and is an inspiration to youth and adults alike. She’s inspired other girls to wear hijab and respect the rules of Islam. She even teaches Qur’an to children on the weekend. But there’s only one problem. When her mother isn’t looking, she removes her hijab after leaving for school, and she hides her Islam from teachers and classmates…and she likes a non-Muslim boy.

In other words, Inaya is living a double life.

And to make matters worse, Inaya’s mother, who converted to Islam when Inaya was a child, thinks the only real Muslims are those who favor women wearing all black and niqaab (the face veil). When Inaya’s Arab stepfather asks Inaya’s mother Veronica to consider making exceptions to covering her face in America, Veronica becomes indignant and vents to a friend. Incidentally, Inaya overhears part of the conversation after she returns home from school, where she’d secretly removed hijab for the first time:

“What about Inaya?” Veronica said, the question halting Inaya’s steps after Inaya closed the front door and stepped inside. “If I take off my face veil, how do I explain that to her?” Veronica groaned. “Next thing you know, he’s going to ask me to start wearing colored hijabs.” Silence followed for several seconds before Inaya heard her mother moan in exhaustion. “I know, ukhti,” Veronica said. “I’m not saying it’s haraam. I’m just scared he might ask me to take off hijab eventually.”

Inaya dragged herself to the kitchen, sadness weighing on her.

“I’m not overreacting,” Veronica said defensively. “Why should I uncover my face? Even if niqaab’s not obligatory, what’s the point of taking it off? I fear Allah, not the people.”

Inaya glanced at the clock. It was almost four o’clock, and she hadn’t even prayed Dhuhr, the early afternoon prayer, and it was almost time for Asr.

“Because that stupid Arab culture made Sa’ad ashamed of his wife.” Veronica’s tone was indignant. “And now I’m supposed to feel ashamed for practicing the Sunnah?” She huffed. “They can keep their on-off hijab crap to themselves.”

How Could You Portray a Good Muslim Like That?

The above excerpt and storyline are taken from my latest novel Muslim Girl, and although the response to the book has been overwhelmingly positive, the story has received its share of criticism. How is it possible that a Muslim author could take such a praiseworthy act like memorizing the Qur’an and associate it with a girl removing her hijab behind her parents’ backs, hiding her Islam at school, and liking a non-Muslim boy?

Well, it’s not the memorization of Qur’an that is being linked to Inaya removing her hijab and living a double life. It’s her humanity. It’s just that this particular human being happened to have also memorized Qur’an and is generally viewed as a “good Muslim” in the community. The point of this complex scenario is simply that our humanity and obligation to strive against our faults and sins does not magically disappear just because we happen to love reading Qur’an and inspiring others to do good.

However, we live in a pretty confusing time, especially for Muslim youth, who are often thrust into contradictory environments simultaneously. On the one hand, their parents teach them to be good Muslims, have righteous companions, and put Allah first in everything. On the other hand, their parents leave Muslim lands and communities and enroll the youth in public schools and secular colleges, and they genuinely expect actions like wearing hijab and memorizing Qur’an to act as fool-proof shields against any human weakness and sin.

On top of that, even when these youth seek out Muslim company and environments, whether online or in their local communities, they find that the culture of “religious” Muslims is often cliquish, uppity, and hostile. The Muslims who consider themselves more knowledgeable than others feel free to dictate not only what “weak” Muslims should be doing, but also what “good” Muslims couldn’t possibly be doing.

On the surface, it might appear as if these practices are aimed at simply commanding good and forbidding evil. But in practical reality, this is not what is happening. Many of these “religious” Muslims announce and publicize others’ faults. Many storm social media sites and Facebook pages by posting Qur’anic verses, hadith, and threats of Hell Fire to “advise” those they disagree with—even regarding matters in which there are legitimate differing opinions. Many spend an inordinate amount of time obsessing over the “right” hijab such that even women who are already fully covered are subjected to constant criticism and harassment. And even when Muslims are doing nothing visibly wrong, these Muslims dig for evil to forbid. Then they openly question and reproach others for trivial decisions like having a profile picture or posting a status or link unrelated to the suffering in Palestine and Syria.

Why then does it come as a surprise that some youth who are genuinely striving to be good Muslims stay away from other Muslims, avoid Islamic activities, and minimize their trips to the masjid itself? For certainly, if those who are committing no clear sin are berated for being “bad Muslims” just because someone holds a different fiqh opinion than they do, where in the world do youth go who are committing clear sin and merely want a spiritually safe environment to get back on track?

What Is It That You Really Want?

In this suffocating environment, it often feels as if the decision to become visibly Muslim is simply a public announcement to other Muslims that they now have the right—and “Islamic obligation”— to make your life miserable until they appoint themselves as overseers of every detail of your life, from your decision to wear a certain scarf pin to your decision to pursue a certain career path or even marry (or not marry) a certain person.

This might sound like a rhetorical or even sarcastic question, but it really isn’t. Most of us, myself included, would like to think that we genuinely want our brother or sister to dedicate his or her life to pleasing and serving Allah when we “advise” them on certain matters.

But what do our hearts and actions attest to?

This is a difficult question to answer, at least for those who truly wish to be honest with themselves. Many of us have enough Islamic knowledge and life experience to understand that, outside of adhering to foundational and clear, indisputable requirements in Islam, pleasing and serving Allah simply will not “look” the same for each individual Muslim. Why then do we keep perpetuating “Islamic” environments that are more focused on creating clones of ourselves than on fostering close relationships with Allah?

No, it isn’t right for a girl to memorize and teach Qur’an then turn around and remove her hijab, hide her Islam, and try to hook up with a boy. But it also isn’t right for us to tell Muslim girls and boys that they can’t wear hijab or memorize Qur’an if they have these struggles or inclinations. Being human is a part of life. And our humanity doesn’t disappear simply because we love doing righteous deeds.

Yes, we need to remind and advise each other toward good and away from sin. But we also need to understand that as we strive to do good and avoid sin, we should feel free to memorize Qur’an, wear hijab, and engage in any righteous action, even as we’ll always have faults and sins to tend to. These righteous actions just might one day be the means through which we overcome the very faults and sins that people say a hijabi or memorizer of Qur’an couldn’t possibly be doing.

And yes, we could even benefit from more Muslim Girl-type fiction stories in books. Because we have more than enough Muslim girl [and boy] true stories in real life. And given that so many Inayas of the world feel suffocated by modern “religious” culture, castigated by Islamic preaching, and unwelcomed in masjids, I think they at least deserve the opportunity to sit alone in their homes, open a book, and learn that yes, pleasing and serving Allah is possible after all—and that even if you’re a “good Muslim,” you’ll sometimes do bad things.

And, even then, so long as you don’t give up on your soul altogether, Paradise is for you too.

Umm Zakiyyah is the internationally acclaimed author of the If I Should Speak trilogy. Her latest novel Muslim Girl is now available. To learn more about the author, visit ummzakiyyah.com or subscribe to her YouTube channel.

Why Our Prayers for Gaza May Not Be Answered