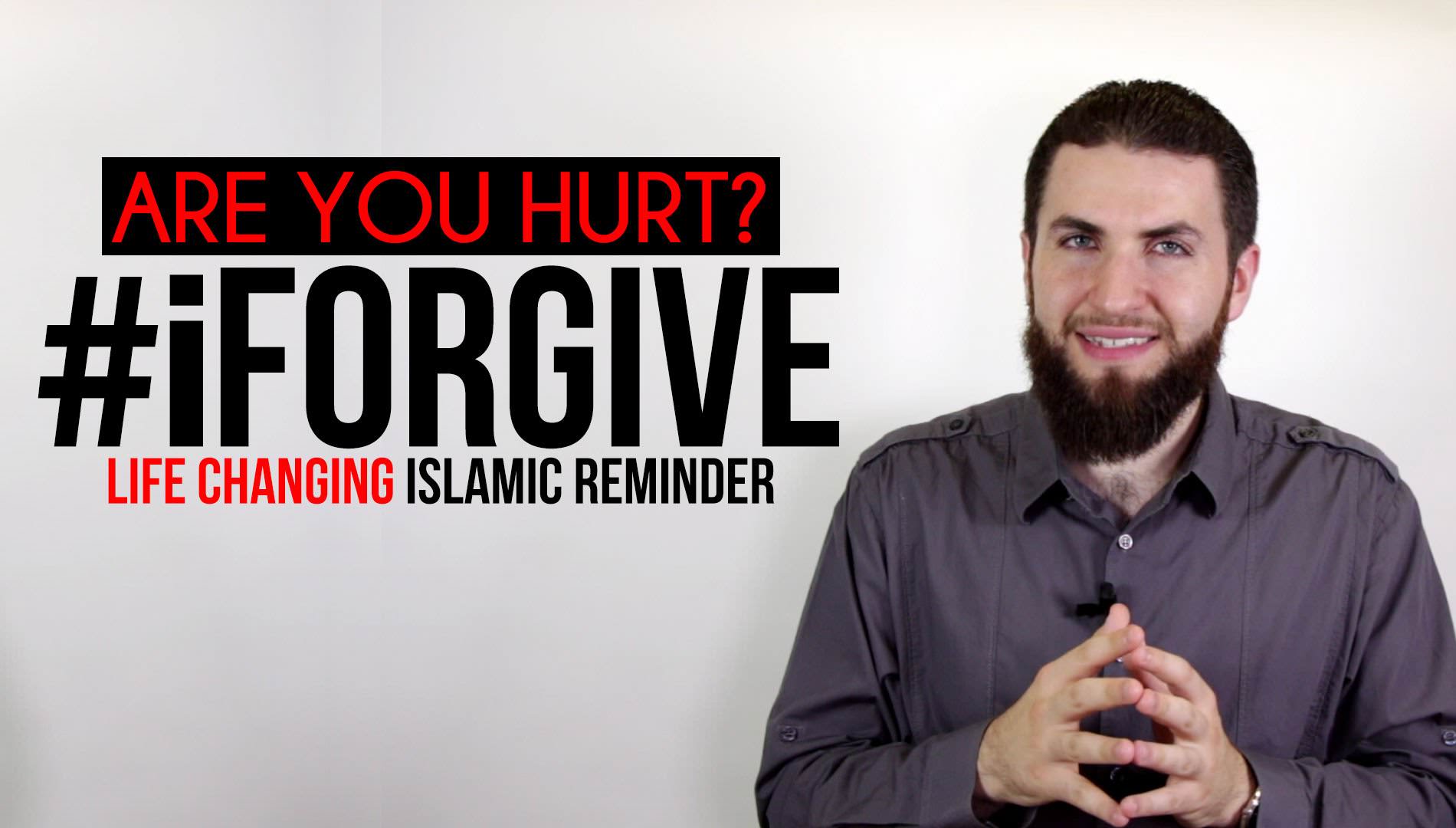 If you prefer watching a video of the same exact content, rather than reading it, you may click here

When someone hurts you and oppresses you there are several permissible ways where you can react to that oppression:

– You can go to Allah with your weakness and raise your hands to Him and make a dua, a supplication, against the one who has oppressed you; and the Prophet

confirmed in numerous authentic ahadith that the dua of the one who is oppressed would surely be accepted without any doubt.

– You can also just wait until the day of judgment and seek to get the good deeds, equivalent to the amount of oppression and pain that person did to you, as means of revenge and taking your right back. And in case the one who oppressed has no good deeds to give you then you would give THEM your bad deeds as the Prophet

also stated in an authentic hadith.

But there is another option, which is the point of this whole article, that is better than all what has been mentioned but only a few people pursue it. I ask Allah to make me and you amongst the few. What is that option? It is for you to forgive the one who hurt you and oppressed you. So you don’t make a dua’a against them and you don’t take from their good deeds on the day of Judgment. But what’s the point then? You will get more than seeing that person being harmed just like how you were harmed and more than the good deeds you could’ve taken…

Rather you will be getting a reward, from who and how much? From Allah… He didn’t put a limit to it. Allah said in Chapter 42 Verse 40:

It is so amazing how Allah puts these words together. When a king in this world tells you: “I have a gift, a reward, for you”, then you would imagine that that gift and reward is equivalent to the wealth, power, majesty and capability of that king. If this is the case with a king in this world then what about the king of all kings, Allah…?

If you would allow me, my beloved brother and sister, to stress on the point of forgiving those who wrong you, and please don’t rush and say: “speak as long as you want brother Majed, I will not forgive that person who wronged me and oppressed me”. Rather, please give Allah and the Prophet of Allah

a chance through the verses and ahadith you would hear. By Allah, that is for your own sake. I want to stress on the concept of forgiving those who wronged you by doing 2 things:

Number 1: by destroying and exposing the real value of this low and cheap dunya that we are living in

Number 2: by showing you how amazing, honorable and beautiful is the reward of Allah in this dunya and in the akhirah for those who forgive.

Are you perhaps ready for  a life changing experience?

Bismillah, let’s look at the reality of this dunya: In an authentic hadith, in Saheeh Muslim, the Prophet of Allah

once grabbed a dead one-eared goat from the ear that remained. [Try to picture it ] And he asked his friends while holding the dead goat: “Who would buy this for 1 dirham” [such a low price for something the people would pay tens of dirhams for but the Prophet

offered it for 1]. The companions said: “We don’t like to have it even if it was for nothing. What is the benefit of it?” The Prophet

then asked: “Would you like to have it for free?” They replied: “By Allah, if it was alive we wouldn’t take it for the way it looks with the chopped ear and so on then what about if it was dead.” The Prophet

then said: “فَوَاللَّهِ، لَلدُّنْيَا أَهْوَنُ عَلَى اللهِ مَنْ هَذَا عَلَيْكُمْ‏.‏” [I swear by Allah, this dunya is of a lesser value in the sight of Allah than this, dead disgusting one-eared goat, is to you.]

Allahu akbar! What is it in this lowly and cheap dunya that is worth cutting our ties of brotherhood and sisterhood.

On the other hand, know that of the fastest and easiest ways to gain the forgiveness of Allah, don’t we say so desperately: “اللَّهُمَّ إِنَّكَ عَفُوٌّ تُحِبُّ الْعَفْوَ فَاعْفُ عَنِّي” [O Allah you are forgiving and you love to forgive so please forgive me], do you want to maximize your chances of having Allah to forgive you!? Then your best and easiest of chances is to forgive the one who has wronged you. The Prophet

that your forgiveness to the one who wronged you will actually be means for YOU to be forgiven by Allah. But let’s get even more motivated with statements from Allah and His prophet

Listen to this, after Abu Bakr As-Siddeeq

stopped giving his relative, MesTah bin A-thaathah, a monthly allowance because MesTah contributed to the accusation of Aisha, the daughter of Abu Bakr,

that she committed a major sin with another man, in which Allah has already shown her innocence in surat An-Noor, Allah revealed a verse addressing Abu Bakr and he said in Chapter 24 Verse 22:

Let not those whom Allah blessed them with wealth to withhold it from their relatives, the needy and those who immigrated for the sake of Allah.

ALLAHU AKBAR! WHAT!? Forgive and reconcile the one who accused my honor and the chastity of my own daughter!!! Then Allah continues and says, here he is addressing ALL of us!

Upon hearing this, RIGHT AWAY, Abu Bakr

said: “بلى واللهِ إني لأحبُّ أن يغفرَ اللهُ لي” [Yes, wAllahi! I love for Allah to forgive me. And he also said: I will never stop giving the monthly allowance back to him.]

Allahu akbar, what a man! May Allah be pleased with him. I ask Allah to grant you my beloved brothers and sisters who is reading such a strong eman and such eagerness to care about Allah’s forgiveness to you. Ameen.

Another reward and honor from Allah to those who forgive, Allah basically tells them: “I love you”…. And if Allah loves you then what else in the world matters… Allah says: “وَٱلۡعَافِينَ عَنِ ٱلنَّاسِ‌ۗ وَٱللَّهُ يُحِبُّ ٱلۡمُحۡسِنِينَ” [And those who forgive the people. And Allah loves the muhseneen].

Allahu akbar! He considered you among the elite, the muhsineen, and he said that He loves them. I ask Allah to make you, my beloved reader, among those whom Allah loves.

In an authentic hadith in Saheeh Al-Bukhari, the Prophet

once had poisoned brought to him by a Jewish lady. When the Prophet knew the meat was poisoned the lady was brought forth and the companions

: “Shall we not kill her?” [What do you think the Prophet

said? What would his reaction be towards a person who was about to poison him, basically, an assassination attempt!] The Prophet

replied with one word and said: “No.”

Allahu akbar! She tried to kill him but he chose to overlook what she did.

To sum my message in one sentence:

There is nothing, in this cheap and lowly dunya that is worth forsaking the forgiveness, reward and love of Allah, nothing.

I begin with myself, as of tonight, Allah and you are my witness that I have forgiven anyone who has ever wronged me in any way, shape or form since the day I was born, whether it was the person who used to bully me when I was in school and caused me to hate being in school, or the one who cursed me and called me names on Facebook, YouTube and Twitter or even those who have backbit me and gossiped about me behind my back and I am not aware of. All of you are forgiven.

Bismillah, it is your turn. My beloved and respected brother & sister:

o   Forgive and Allah will forgive you

o   Forgive and your reward is on Allah

o   Forgive and Allah will love you

Be sure to share this article, for you might be means of helping others forgive those who wronged them, and such act of worship is better than praying taraweeh, sunnah prayers and giving charity as the Prophet

stated in an authentic hadith in Saheeh Abi Dawud. Please share this.  May Allah bless you.

A Date with Obama | The White House Iftar: Inclusion or Delusion