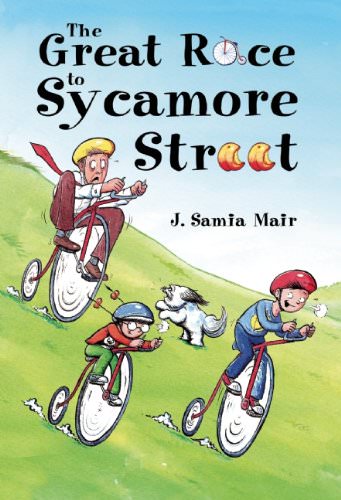 “I read about the Prophet Muhammad and whatever made him, him, that is what I wanted to follow,” muses children’s book author Julie Samia Mair, who writes fun books with a message; books that her own children will want to read.

She is an explorer, just like her character Sarah in the The Perfect Gift. Raised in Pittsburgh, a graduate of Smith College in Massachusetts, she spent the early part of her adult life in Philadelphia, working as a prosecutor. This is where she wrote her first novel, which was never published.

She received her Masters in Public Health and taught at the Johns Hopkins Bloomberg School of Public Health. After publishing several technical academic papers, she wanted to publish writing of a different kind.

Now, she is a resident of Maryland; Baltimore is where she found Islam in 2001- God’s perfect gift to the world. A poet by nature, when she first read the Surah Fatihah, Mair had been searching for guidance. “This was the poem, the prayer for guidance that I had been trying to write for eight years,” says Mair.

At that time she was engaged to her husband, a lapsed Catholic, who believed in one God and that the Prophet was the last Messenger. She found the only imam in America who said that it was okay to marry him, even though he had not taken the shahadah, she says with a giggle. Her husband embraced Islam on his own a few years later. “I didn’t know any better. By the time I realized my mistake, he was ready to convert,” she adds.

By this time her family, blessed by the addition of two daughters who Mair and her husband adopted from China, needed her full attention. She now homeschools her soon-to-be eleven year olds. On her bedside table is an eclectic mix of books: “The Stars in the Prophet’s Orbit,” “Mornings in Jenin,” ”Reflection on the Quran,” and “Lies My Teacher Told Me.”

Mair’s focus these days are her Islamic Studies classes, she feels that she has a lot of catching up to do.

“I don’t have time to read fiction,” confesses Mair. The only book of fiction she is currently reading is a historical novel that she is teaching her daughters.  She wants her daughters to be wise consumers of history and news stories.

Mair has published four books with The Islamic Foundation or its affiliate Kube Publishing, based in the United Kingdom: The Great Race to Sycamore Street, Amira’s Totally Chocolate World, The Perfect Gift, and the [update:now] released, Zak and His Good Intentions.  The publishers choose her illustrators. “I love the illustrations in my new book,” she gushes.

The Perfect Gift was a story knitted for her daughters to keep them entertained during a bath. A family favorite, she decided to write it out. Amira’s Totally Chocolate World was a story written for a niece in 2001 about a young girl who wishes that the whole world was made out of chocolate; Mair tweaked the story for Muslims.

Amira is one of Mair’s daughter’s middle name. The yummy story is perfect for 4-8 year olds to appreciate Allah’s creations.

Trying to fill the need for quality fiction for our children, especially chapter books for the 7-12 year olds, Mair is working on more titles.

In her books the main characters are Muslim, but they aren’t preachy. These are stories of children’s lives that just happen to be Muslim. Islamic references and culture are woven into the stories. “We talk like that; we refer to hadith in regular life and I wanted to show that,” says Mair.  Kids who read the books can identify with the characters and normalize their experiences, mentions Mair, who has blogged as the Baltimore Muslim Examiner for Examiner.com and publishes regularly in magazines for Muslim women and children.

She is hoping to host a book signing at a big bookstore for her new book, Zak and his Good Intentions. A story of a boy who is trying to please Allah by doing good deeds.
The descriptions of peach growing is so accurate in her book, The Great Race to Sycamore Street, that one would think that she is a orchard owner. Really ‘into’ the research that goes into her stories, she spent hours learning about archery and read about ten books on peach growing for this juicy story about a pair of siblings, Hude and Amani, summering at their Grandma’s country house.

The universal lessons make good classroom discussions for public schools. In the age of the Junie B. Jones series, Mair’s books speak about the environment and bullying. The new neighbor in her book, The Great Race to Sycamore Street, is planning to pull down the grandmother’s prized peach tree and a gang, ‘led by the archer Bobby, is marshaling the local lake’, troubling the siblings.

Mair adds a glossary, questions, and quotes that reference the Quran to the end of her books, which are great teaching tools. “The glossary at the back is a welcome addition for those Islamic and Archery phrases I was not aware of, this helped in the understanding, especially when it taught me something about the sport!” writes Helen, in her review on Goodreads.

For her readers from other faiths, Mair wants to give a glimpse of what it is like to be Muslim- not all Muslims but a Muslim. Some of her characters are based on people in her family, and friends. “Amani is my [other] daughter’s middle name and she loves to write just like the character in the book,” she says. Her daughters like seeing their friends’ names pop up in her books.
Islamic school teachers can also use the books as jumping points for discussions.

Like many writers, becoming a published author wasn’t all peaches for Mair. She spent years emailing queries, but despite lots of rejection, she never gave up. She joined the Islamic Writers Alliance and the Muslimah Writers Alliance. Advising new writers, she says, “I would keep writing to publishers. Don’t get discouraged, write for free and build a portfolio.”

The loss of innocence, cattiness and backbiting that is rampant in today’s youth literature really bothers Mair, a concern shared by many parents across the world.  Anyone wanting to stress books with values to children would want to read Mair’s books.

A few months ago I met J. Samia Mair when I was asked by The Muslim Link to interview her for the paper.  As parents and teachers we are always looking for fiction books for our young children that are well written, engaging and have positive messages and values. I had not heard of her titles and did not own any, so she sent me 4 books that my own children read. The sweet stories in The Perfect Gift and Amira’s Totally Chocolate World were beautifully illustrated. My sons (6 and 8) thoroughly enjoyed them. The Great Race to Sycamore Street is a chapter book that my eleven year old daughter is reading to her younger brothers. Hope your family enjoys them as much as we did.

The Six Habits of a Highly Effective Ramadan

Of Love, Parents, and Ramadan