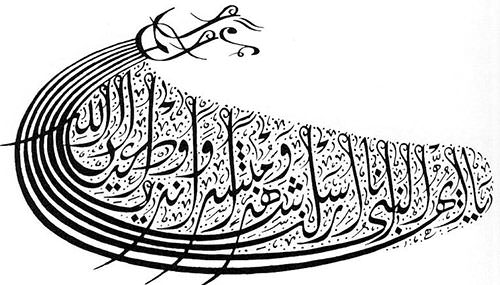 Arabic calligraphy was originally a tool for communication, but with time, it began to be used in architecture, decoration and coin design. Its evolution into these major roles was a reflection of the early Muslims’ need to avoid, as their beliefs required, figures and pictorials that were used as idols before Islam was established in the Arabian Peninsula.

While the Arabic tribes preferred to memorize texts and poetry, the first Muslims tried to document their holy book (Qurʾān Kareem) using the scripts that we’ll look at in this article. In order to understand how these scripts developed into the beautiful and complex shapes we know today, we have to understand the history of Arabic calligraphy.

Over the course of their development, the Arabic scripts were created in different periods and locations of the expansive Islamic Empire. There is also a close relationship between each Arabic script and its common usage throughout history. This leads us to the question of why this article is important, especially for non-Arabic speakers, and what information can be gleaned from each script.

Well, understanding the history of each script and how Arabic calligraphy evolved over the history of the Islamic Empire can expand our visual experience beyond the beautiful glyphs and forms. Some scripts reflect the time period in which they developed, such as the Musand script, which emerged at an early stage in the history of Arabic calligraphy. Others provide geographical insight into where the artwork was developed, such as the Maghribi script, which distinguishes the artwork and inscriptions of northwest Africa.

Can different scripts tell us more information, such as the geographical area where each was developed? How much was the local culture affected by each script? We will try to answer these questions, while briefly going through the history and style of each script.

The Early Development Of Arabic Scripts 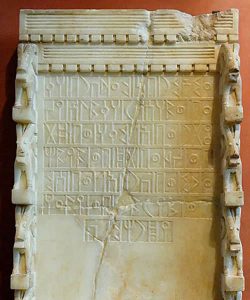 The first Arabic script, Arabic Musnad, which likely developed from the above-mentioned languages, doesn’t have the cursive aesthetic that most people associate with modern Arabic scripts. Discovered in the south of the Arabian Peninsula, in Yemen, this script reached its final form around 500 BC and was used until the 6th century. It did not look like modern Arabic, as its shapes were very basic and resembled the Nabataean and Canaanite alphabets more than the Arabic shapes.

The first form of an Arabic-like alphabet is known as the Al-Jazm script, which was used by northern tribes in the Arabian Peninsula. Many researchers think the roots of this script go back to the Nabatean script, and yet the early Arabic scripts also seem to have been affected by other scripts in the area, such as the Syriac and Persian scripts. The Al-Jazm script continued to develop in the west of the Arabian Peninsula, in Mecca and Medina, until the early Islamic era.

The Al-Jazm script developed into different styles, such as the Hiri, Anbari, Makki and Madani. During this period, some other scripts developed, such as the Ma’il, which is considered the predecessor of the Kufic script. Other scripts did not make it through the development process, such as the Mukawwar, Mubsoott and Mashq (which you can read more about in “The Development of the Arabic Script: A Brief History” by Professor M.J. Alhabeeb of the University of Massachusetts Amherst). These scripts were used before and during the early days of the Islamic Empire in the Arabian Peninsula.

Following the Arabic Musnad and Al-Jazm, the Kufic script evolved as the next stage of Arabic calligraphy’s development. Unlike those two old scripts, we can identify known letter shapes in the early development of the Kufic script.

As the Kufic script developed over the 7th century, it played an essential role in documenting the Muslim holy book (Qur’an Kareem). The Kufic script is one of the oldest Arabic scripts that persisted in common use until the 13th century. Its name refers to the city of Kufa in Iraq, where it first appeared, yet most instances of this script were found nearly a thousand kilometers to the south, in Medina in the Arabian Peninsula, where the Prophet Mohammed stayed after moving from Mecca.

In the early stages of its development, the Kufic script did not include the dots that we know from modern Arabic scripts. The letter dots (Nuqat) were added during the later development of this and other scripts. Also, at a later stage, Abul Aswad Al Du’ali (688 CE) and Al Khalil Ibn Ahmed Al Farahidi (786 CE) developed the diacritical marks (Tashkeel) that indicate the vowels of the letters.

If we examine Kufic script inscriptions, we’ll notice particular characteristics, such as the angular shapes and long vertical lines. The script letters used to be wider, which made writing long content more difficult. These characteristics affected the usability of the script and made it more suitable for architectural and written Islamic titles, instead of long texts. The script was used for the architectural decoration of buildings, such as mosques, palaces and schools.

The Kufic script continued its development through the different dynasties, including the Umayyad (661 – 750 CE) and Abbasid (750 – 1258 CE) dynasties. Below are some examples of Kufic scripts and their different developmental stages: 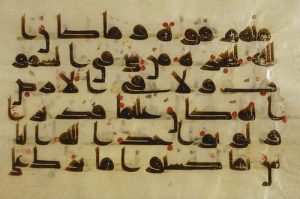 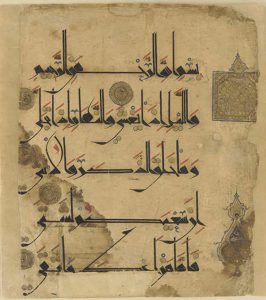 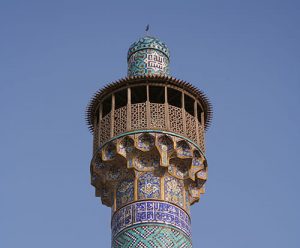 Islamic Derham from the Abbasid period with Kufic scripts on both sides (Image source: Hussein Alazaat)

While Kufic has been used for a long time and is one of the more common scripts across the Islamic civilization, some versions of it were developed in particular areas, such as Egypt and Iraq. Understanding how the script developed in different areas and being able to identify each variation of it will help us identify the origins of the artifacts where they appear. Variations and developments of the Kufic script include the following:

As an Egyptian citizen residing in Cairo, I enjoy the Fatimid Kufic as part of my daily life because it can be seen in the architectural decorations on the old Islamic buildings. This script was used with decorative motifs in the characters themselves or as a background. The letters are marked with straight lines and angles, with short curves for some letters at the ends of words. One of the leading scholars and an award-winning researcher in the Fatimid Kufic script is Bahia Shehab, Professor of Professional Practice at the American University in Cairo. 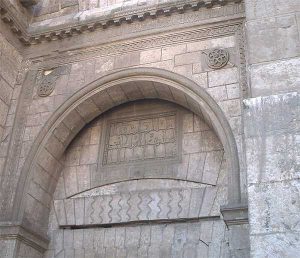 The Fatimid Kufic script appears in the architecture of Bab Al Nasr, a gate built by Babr Al-Jamali, a minister of Fatimid Caliphate (909 – 1171 CE), on the northern wall of Fatimid Cairo (Image source: Md iet) 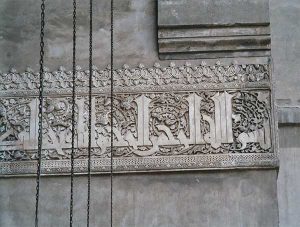 The Fatimid Kufic script appears here on the Sultan Hasan mosque in the Fatimid Cairo. (Image source:Stars in Symmetry)

Dispatch Wizard | Part 3 – Do it for Love