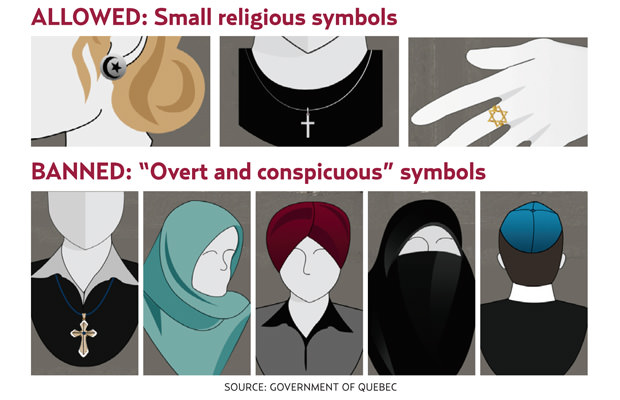 “Mom, are we going to leave Canada?” Shahzaib, my almost 10-year-old’s voice was laced with nervousness, his big brown eyes filled with a worry that can cut through a mother’s heart. But, my answer came gently, yet firmly.

“Yes, hon, if Bill 60 gets passed, and if it ever gets adopted by all of Canada; we would leave. In a heartbeat.”

He got it.  Sheheryar, my older one was already asking follow-up questions.  I was glad, and relieved. They understood – being a Muslim came first. We had just discussed Bill 60. My sons couldn’t fathom the “unfairness,” of it.

And, unfair just begins to describe it.  Bill 60 is the secular values charter being advocated in Quebec.  It is Parti Quebecoi’s latest ploy to grab the headlines.  Funny how it manages to pummel basic religious values embraced by four major religions: Islam, Sikh, Judaism, and Christianity in order to create secular ones.  The separatist government led by Democratic Institutions Minister Bernard Drainville is championing the bill, which asks civil servants to get rid of “ostentatious religious symbols.”

Ostentatious? Right click the word and here’s what you learn:  ostentatious is a synonym for flamboyant, showy, brazen, and pretentious.  It is the opposite of modest, which is exactly the main reason for the hijab, and other religious “symbols” being discussed.

Maybe Drainville can use English lessons? But, I digress.  I am unable to comprehend the chutzpah possessed by Bill 60 supporters.  What gives them the right to single out the hijab, a mandatory observance for Muslim women, or the Sikh turban, the Jewish kippa, and the Christian cross?  How is it democratic to set aside the rights of those embracing their religions in favor of those who stand for nothing?  There is no method to this madness.
And, in what can only be deemed as phenomenally ironic – Drainville banned the use of “racist” during the Bill 60 hearings now going on in Quebec.  So he’s not a racist? The supporters aren’t racists. Who’s the racist? If you can answer this question, you are surely smarter than I am.

Is this about emulating France? The Francophone in Quebec and their ceaseless yearning for the motherland has gone too far. Whatever unfulfilled desires Quebecers may have when it comes to their heritage, projecting them on other multicultural groups is simply uncalled for!

Nevertheless, here’s how you can help.  And, it doesn’t matter whether you wear the hijab, live in Canada, or what your political stance is – this is about basic human rights. This is what North America is all about – embracing democracy in its purest form.

Quebec’s Premier Pauline Marois has recently said she’ll “listen to citizens,” when it comes to Bill 60.  Please e-mail her here.  Your two minutes will go a long way in helping her understand that this is making waves across the continent, if not the world.  Apathy needs to end where our religious duties begin.  This is for the sake of Allah.  Not tomorrow. Now.

There is also a petition going around, which is crawling at best.  Please take a moment to sign it, and add to the noise.  Every little bit counts.

And, lastly there is a Facebook page and Twitter account of the same name:  Support Another, and while as a communications professional, I don’t think they are doing a great job – the Facebook page is limited to photos only, and the Twitter account is unkempt – they are still portals.  Using the #Quebec and #Bill60 hashtags on Twitter helps as well.  They have turned out to be effective.

Rocking the boat has never been easy.  Leading your daily life with ease is perhaps the single most important thing dear to many of us.  But, what do we stand for? Is it okay to shrug and ignore this because we don’t live in Quebec? How would we answer Allah on the Day of Judgement? How would we justify not caring for our fellow Muslims, and fellow human’s plight? We are to care for all – regardless of religion – that’s Islam.

Speaking of caring, I want to take this opportunity to thank Muslimmatters EIC, Hena Zuberi, who has been a big help MashAllah via Twitter. She said Labaik when I requested her help. And, immediately invited me to write this piece.  JazakAllah Khair sister, I’m grateful.

So once again, please take a few moments to e-mail the Quebec Premier.  Please sign the petition.  And, share them too.  If we won’t care, who will?