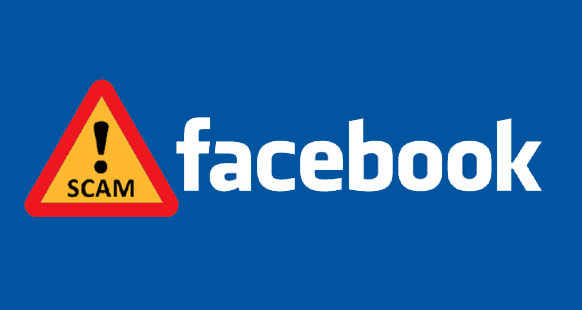 Audio-log of the Phone Conversation: ‘Sh Yasir Qadhi’ Exposed!
On December 28th, at 4:05 p.m. EST, I was contacted by “Shaykh Yasir Qadhi” on Facebook. After salaams and formalities, he proceeded to ask me for donations. He explained that he was collecting funds for an orphanage in Malaysia and that he would like me to contribute to the cause. How could I refuse to help orphans, especially, after a plea from a man whom I trust and respect?

I asked him for the details, and he explained that they had a target of $100,000. I assured him that my family and I would contribute about 20% of that amount and would reach out to our personal and professional networks for contributions towards the rest. I also told him that a business owner friend of mine was interested in donating not only towards the orphanage, but also towards the sheikh’s personal dawah efforts.

He was thoroughly pleased and assured me that he would provide me with account details via e-mail very soon. I awaited his reply.

Soon, he sent me account details of a bank account in Malaysia – this account was not under his name. I was uncomfortable with this fact so I asked him to send me details for an account that was in his name. I also asked to speak with him over the phone as this would make me more comfortable about the whole thing. I had trouble getting through the first time I called, so the first time we finally spoke, he was unable to talk long. He assured me that he would get me account details very soon, and he made some duas for my life in this world and the next and we rescheduled the call to the next day after maghrib, my time.

On December 29th, we continued our conversation on Facebook messenger and I was provided with bank details for an HSBC account in the UK under the name of Al Maghrib Charity Foundation. Given the increased stringency of the banking system post 9-11, I asked him if he had any accounts in any other countries. He asked me which countries I was looking into, so I mentioned African countries.

We, then, had another phone call in which he asked me to make sure I didn’t let the bank know I was sending money to someone I spoke to on Facebook.

On December 30th, he sent me bank account information for an account in Nigeria. He apologized for not being able to provide details of other accounts and urged me to send the funds as soon as possible.

He seemed very angry and frustrated when I told him that because of holiday closures I would not be able to send the money until after New Year’s. He then later apologized for expressing his frustrations. After this apology, his account was deactivated and reactivated a few hours later.

On December 28th at 4:08 p.m., I emailed Dr. Yasir Qadhi on his personal e-mail address and asked him if it was really him that I was speaking to on Facebook. He told me it was not. He told me that there was a man who had been impersonating him for some time now, and that he had not been able to apprehend him. He urged me to extract as much information as I could from this man and help to bring him to justice.

After receiving the details of the Malaysian account, both Dr. Yasir Qadhi and I contacted the Malaysian bank and proceeded to log a complaint. After narrating the story and sharing the account details, we were directed to their fraud unit to file an investigation.

When I spoke to this man on the phone, I was able to determine that he was of Nigerian decent. I thus urged him to send me account details in Nigeria as I have contacts in that region. Upon receiving the account details, we were able to contact the Nigerian authorities to get them involved in the investigation.

On December 30th at 1:00 p.m. EST, I called the Canadian Anti-Fraud Centre but hung up after being on hold for 20 minutes. I then called the Royal Canadian Mounted Police and was advised to call the Ontario Provincial Police Anti-Rackets unit in Orillia.

One of my contacts in the Federal Inland Revenue Service offered to forward the case and all of the evidence to the Chairman, Economic Financial Crimes Commission in Abuja, Nigeria. Upon receipt, EFCC immediately began investigating the local account in the hopes of identifying the account holder and arresting him.

An official investigation is currently underway with the RCMP along with their Nigerian and Malaysian counterparts.

Ed.Note: This scenario has taken place with many Shuyookh and teachers. Someone created a fake profile of Imam Abu Abdissalam and when asked to speak at an event, he asked for a “donation” to be made to a “cause” in Nigeria. His fake profile actually mimicked his real profile. Someone impersonating Sh. Abdul Nasir Jangda asked young women awkward questions and solicited donations, another used Imam Suhaib Webb’s name to ask for donations. Please be careful. 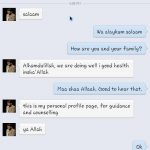 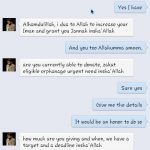 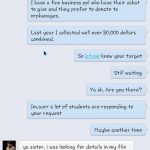 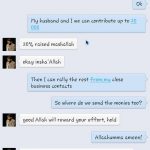 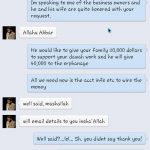 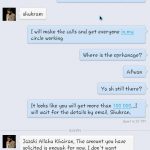