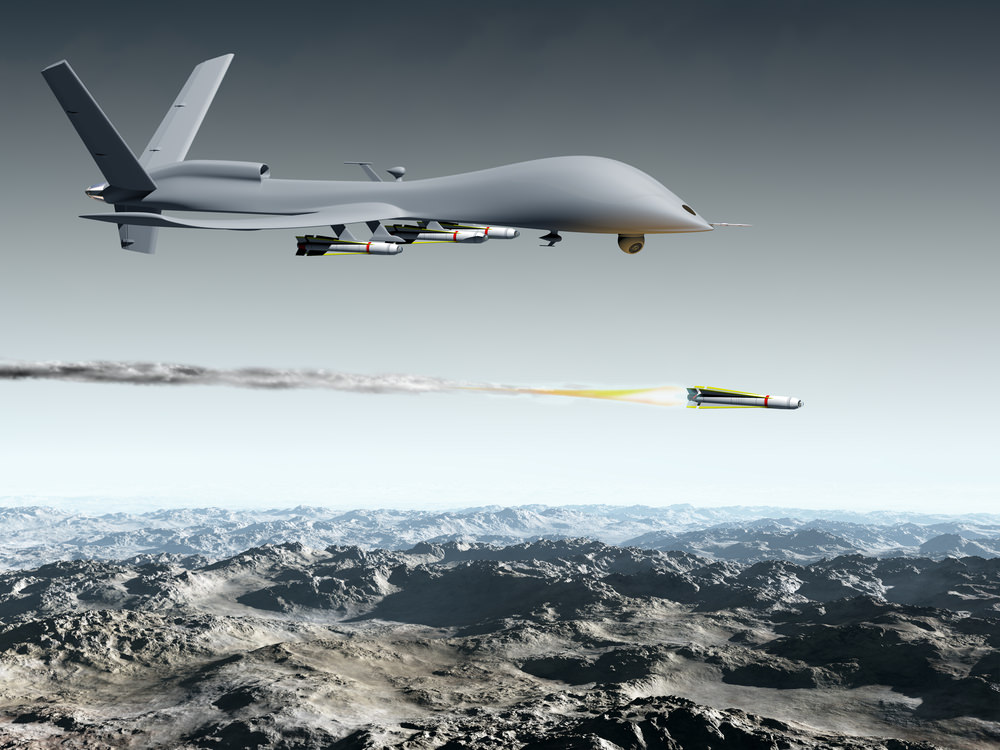 At least 15 people on the way to a wedding were killed by the United States Government in a horrific drone strike in Yemen, just two days after President Barack Obama spoke at the memorial service for Nelson Mandela and said Madiba “makes him want to be a better man.”

We call on the President to be the better man today. This needs to stop.

Imagine a wedding party, families dressed to the hilt; joy and festivities in the air, and then not even being able to find body parts to hold a funeral. 22 were injured in this ‘tragic mistake’. The worst in Yemen since the strikes began.

The group had been en route to the the village of Qaifa, the site of the wedding, when it was hit. The assault left charred bodies strewn in the road and vehicles on fire, officials told AP.

Where is the outrage by the international community? As Mark Prsyner, an Iraq War vet and anti-war activist tweeted: 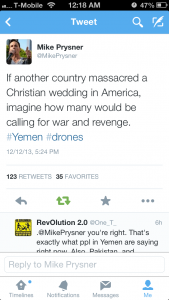 This isn’t the first time the US government has done this. According to TomDispatch this may be the eighth wedding party that the U.S. has bombed.  A convoy of cars is often seen as ‘terrorist activity’. There are some reports that there may have been Al Qaeda operatives in the convoy, but Yemeni journalist Shuaib M. Almosawa recalls an Aug 8 strike that killed 3 brothers and Yemeni security officials said two were from AQAP. “Later they’re 2 kids & elder bro”. And there are other instances. 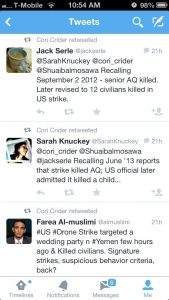 Last month a Yemeni delegation was at the U.S. Capitol for a Congressional briefing, hosted by Representatives Barbara Lee, Alan Grayson, and Jan Schakowsky. These hearings give Congress an opportunity to listen to those people who have been directly impacted by US drone strikes in Yemen- the human cost of this ‘war on terror’.

“I came here to share with you my story and what happened to my family. Who are the ones responsible for the deaths of my relatives? Will anyone be held accountable for their deaths?”-Faisal bin Ali Jaber

A day after his son’s wedding, Faisal bin Ali Jaber, a Yemeni civil engineer, mourned the death of his brother-in-law, Salem bin Ali Jaber, an outspoken anti-extremist cleric, and his nephew, Waleed, a policeman, when they were killed without warning by a US drone strike on August 29, 2012.

As he was speaking at the hearing another drone attacked his home province of Hadramawt, killing three.

According to Wired.com, the U.S. has two separate drone campaigns underway in Yemen — one run by the CIA, the other by the military’s Joint Special Operations Command. Together, they’ve conducted 43 strikes in two years, according to a Long War Journal tally, killing 274 people. 473 people since 2009.

No one knows how many of the 274 were militants; the U.S. “counts all military-age males in a strike zone as combatants,” the New York Times recently reported. If someone behaves like a terrorist— which is totally undefined— he could be killed extra-judicially in a “signature” strike. Amnesty International reports that a “guilty until proven innocent” approach is taken to military-age males who are killed by a strike, even if there is no specific evidence that they were directly participating in hostilities in a specific armed conflict.

[box type=”shadow” ]I will have a follow up article on what happens inside a CIA bunker and how intel is fed to drone operators shared by another anti-war veteran as well as updates from the Drone Summit 2013.[/box]

Al Qaeda of Arabian peninsula has claimed responsibility for an attack on the defense ministry in the heart of Yemen’s capital, Sana’a, on Thursday, in which 52 people were killed. The increase in drone strikes is apparently a retaliation.

The drone program is ineffective according to experts and images such as the ones that will haunt Yemenis of this wedding party will overshadow the outrage of the suicide bomb and augment Yemeni anti-US sentiments. And regular Yemenis feel stuck between a rock and a hard place.

More than 50 innocent civilians in our town have been killed by drones,” said Abdullah al-Kabra, an eyewitness to the drone strike.

“All those who were killed were supportive of the governments anti-terror campaign. That will surely not be the case of their tribes and families if the government does not strongly intervene,” he added.-CNN

The Yemeni delegation had gripping stories to tell about how drones have affected their families, their communities and their efforts to bring democracy to the tough terrains of Yemen. Entesar al Qadhi is a female Yemeni politician from Mareb, a prominent location for US drone strikes. She is “a leading voice in the revolution that overthrew dictator Ali Abdullah Saleh.” Yesterday’s drone strike hit a city bordering her area.

“What can possibly justify terrorizing a community of 250,000 just for the purpose of killing one person? It might be the right of the U.S. to protect itself, but that doesn’t mean it can terrorize entire communities,” she conveyed the message of thousands of Yemenis to Americans. “Two members of Al Qaeda were in al Qadhi’s village, one of the most oil rich areas of Yemen.” As villagers were negotiating with the two men, “a drone killed the chief negotiator, scuttling [deliberating sinking] negotiations,” according to drone critic, Professor of Law Marjorie Cohn, as they did recently in Pakistan.

She testified that drones seem to only attack her village after Al-Qaeda members have left. The people of the area now feel that the “drones are for Al Qaeda, not against Al Qaeda,” said Al-Qadhi at the Global Drone Summit. She had a friendly warning for Americans that Yemenis may be the lab rats, as they were a poor, voice-less nation but this technology would eventually land on American shores.

The third member of the delegations was Baraa Shiban, project co-ordinator for the legal group Reprieve. He has researched civilian victims of US air strikes and is a drone critic. He says that drone attacks have a  “destabilizing effect on the Yemen government.” He and Al Qadhi serve as youth representatives in Yemen’s National Dialogue. He was detained at London’s Gatwick Airport in September under schedule 7 of the Terrorism Act.  Cory Crider, who heads Reprieve’s Abuses in Counter-Terrorism team said of the incident: “if there were any doubt the UK was abusing its counter-terrorism powers to silence critics, this ends it.”

Shiban was never a terror suspect. Glenn Greenwald, an well-known journalist writes that top secret US government documents leaked by NSA whistleblower Edward Snowden “characterize even the most basic political and legal opposition to drone attacks as part of “propaganda campaigns” from America’s “adversaries”.”

A reliable way for the US Government to know exactly how many civilians are killed is by hearing direct testimony from the families affected.

Only five Congressman attended the hearing (although staffers from other members of Congress did make it to the testimony.) They came seeking information as the drone program is classified. “It’s conducted by the CIA, which generally doesn’t acknowledge existence of this program,” said Rep. Grayson about the secrecy. “It’s like a strange and extreme police action. There’s a reluctance on the part of the administration to acknowledge that attacks are happening at all.”

Joined by Medea Benjamin of CODEPINK, Robert Naiman, Policy Director of Just Foreign Policy, explained why making the drone strike transparency provisions of the Senate intelligence authorization into law, would be a significant step forward in Congressional oversight of the policy. Naiman suggested that the House Intelligence Committee should introduce legislation to force the Obama administration to disclose civilian casualties from drone attacks and that Congress explore establishing a compensation fund.

The executive director of Amnesty International-USA , Steven W Hawkins, urged the Obama administration to ditch its policy of not commenting on drone strikes. “US silence is unacceptable. Instead of hiding behind secrecy, the US needs to acknowledge and immediately commit to investigating all credible reports of potentially unlawful killings,” he said in a prepared statement.

Last May, Rep. Barbara Lee introduced the Drones Accountability Act (HR 2183) to place a moratorium on the use of drones “until all legal mechanism are in place” and to repeal the 2001 AUMF (Authorization of Military Force).

The briefing followed the Global Drone Summit that brought together people from around the world to discuss strategies to stop the proliferation of drones used for killing and spying. The conference was organized by the peace group CODEPINK, along with the Institute for Policy Studies, The Nation Magazine, Center for Constitutional Rights, and National Lawyers Guild (Georgetown Chapter).

Jaber had requested a meeting with President Obama. He went back to Yemen without a meeting, an apology or an explanation.

Be the better man President Obama.

We call on President Obama to apologize to the families  for the killing of 15 innocent civilians –– all part of a wedding convoy–– by a US drone in Yemen. And ask him to pledge to immediately put an end to these strikes that have led to the death of so many civilians.

Innalilihi wa inna ilayhi rajioon– the names of the dead as published in Al-Masdar: