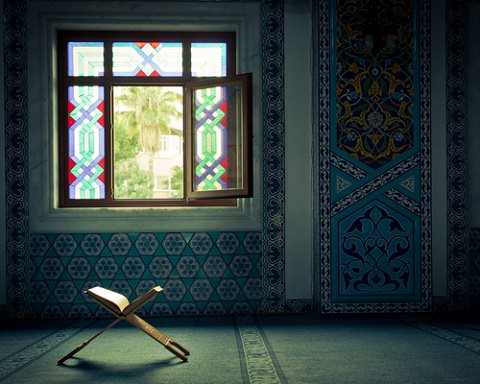 ​Years ago I was walking down the street with a mentor of mine and he was discussing the importance of reading books.  He then stopped, rubbed his shoulder into mine and said, “There is knowledge however that is not taken except like this.”  What he meant, was rubbing shoulders and being in close proximity of the people of knowledge.  It’s one thing to read concepts in books, it’s another thing completely to see those concepts come to life in the real world.

I had listened to a lecture series online by a scholar in the US, it was from it that I learned the statement of Al Bukhari

, “A muhaddith will never be complete until they narrate from who is above them, equal to them, and below them”.  The scholar was using this statement as an example of the need of the student of knowledge to humble themselves, to not only seek knowledge and benefit from people who were obviously superior to them in qualifications, but to take from their peers, those who were equal from them, and to even seek out wisdom and benefit from those who may be less qualified than them, for wisdom is the lost property of the believer.

Ok, I thought, I got it.  Statement is memorized, meaning is understood.  However, that statement took on a whole new LIFE when I had the chance to rub shoulders – to visit the masjid of the aforementioned scholar for a course that was being held there.  He wasn’t teaching the course, he had invited his own shaykh to come and teach the course to his congregation.  He not teaching the course didn’t mean he wasn’t teaching at all because he left me with a lot to learn.  The first thing I noticed about the visiting scholar was that he wasn’t that much older than his student, the host.  In fact, I really couldn’t tell if there was any difference in age at all.  Yet the host scholar had learned some of the variant recitations of the Qurʾān from the visiting one, and the first lesson that I learned was the humility of learning from those who are in your relative age bracket.

The class was studying a classical book in the classical style of ‘ardh, where the student reads the text and the teacher comments where he deems appropriate.  Out of the dozens of people in attendance, guess who was the first to read every single night? You’re right, the host scholar.  He would sit as a student sits, and would read page upon page, at times mispronouncing words or making grammar mistakes in front of his entire congregation, and his shaykh would correct or at times they would discuss the nuances of Arabic grammar together.  Keep in mind that the host scholar is a scholar of the Arabic language, and someone in his position might have been keen to let his congregation keep the illusion of a faultless reading performance by their imam, but instead he showed them the reality of being a student of knowledge, there is always more to learn.  I have attended enough of these types of events to appreciate how rare the sight was, where the imam of the masjid does not sit aloof from the crowd, giving off an air of not being in need of, or already having, the knowledge that is being presented, or simply being too busy doing other things to sit with the students, rather the imam was front and center, aiming to be the star pupil and the greatest benefactor of the knowledge that was being gifted.

And what could I tell you about the manners! When the visiting scholar would wrap up the session, the host scholar would quickly pick up his books for him, and then walk two steps ahead of him, leading him towards the exit.

On the last night that I attended, there were three images that stayed in my mind.  The first was a circle in which a number of people were standing, including the two scholars. A person approached the circle and reached his hand to the host scholar, who instinctively responded by reaching his hand out as well.  He immediately then lowered his head, yanked his hand back and said while pointing to the visiting scholar “Astaghfirullāh, when there is a greater scholar in our presence you start with him.” I was like WOW.

Then at the conclusion of the same circle, our host scholar reached out to kiss the hand of the visiting scholar, who quickly retracted his hand, only to find the host scholar reaching upwards to kiss his forehead.  They then engaged in a back and forth of who could kiss the others forehead.  To be honest, I’ve never been inclined to kissing hands or foreheads of anyone, but when I saw that, I thought I couldn’t be the one with the least knowledge and manners in the group, but apparently I was wrong.

The third image from the same night, a line of people exiting the masjid had spilled out into the parking lot, and I was ahead of the crowd, walking alone with the visiting scholar.  I had bid him farewell and stopped as he continued on to where the car that would take him was parked, maybe some thirty feet still ahead.  As he was walking towards the car, and as I was standing there, I saw the host scholar run from behind me as he raced to get to the car before the visiting scholar, so that he could open the car door for him.  I was shocked. He raced to the car like I would imagine a 19 year old volunteer for an Al-Maghrib seminar or a conference who was on shaykh hospitality for the first time and super excited about it, would race to the car.  Except he wasn’t 19, and this was nowhere near his first time.  But maybe that he carries himself in this manner is the reason why he has been able to traverse so much of the ocean that knowledge is, because he is as consistent about it, as excited and honored by it, as when he was first exposed.

“A muhaddith will never be complete until they narrate from who is above them, equal to them, and below them”.  This statement is not simply words anymore that are memorized, or understood; the host scholar ingrained them in my heart and sealed them with images of parking lot races, reading mistakes unabashedly made in front of congregations, and the most beautiful humility.  There is some knowledge that is not taken, except like this.

The Myth of the Naturally Good Muslim