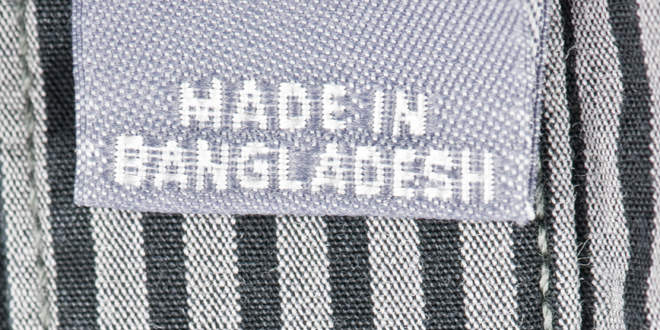 The collapse of Rana Plaza, a garment manufacturing complex in Bangladesh, which killed 1,134 workers, sent shockwaves around the globe this past April. Just a few months earlier, the Tazreen factory fire had already killed 117 people in the country. These latest episodes bring the death toll of Bangladeshi factory workers to over 1,800 since 2005.  The appalling disparity between these downtrodden substandard garment factories and the upscale stores where the products are sold is nothing short of criminal.

Corporations such as Walmart and Gap, which outsourced from these sweatshops, came under intense heat. Investigative journalists, such as that of the CBC and Toronto Star, have since revealed chilling facts. For example, it was found that workers evacuated Rana Plaza a day before the collapse but were forced to go back due to threats of termination. Since the collapse, workers continue to protest for the minimum wage to be increased from $39 a month to a mere $100. Stories of people like 10-year-old Shakil Khan send shivers down the spine. He has been working as an unpaid trainee for 4 months and will make $4-a-day when he gets a salary eventually.

So, what has been done about all this? More importantly, what can we do as socially conscious consumers to ensure our clothes are not made through the exploitation of others?

Calls for industry-wide reforms gave birth to initiatives such as the Accord on Fire and Building Safety in Bangladesh. This is the first one-of-a kind agreement which promises to bring significant changes to working conditions in Bangladesh. It was drafted in conjunction with unions in Bangladesh, apparel companies and labour rights NGOs. It gives workers at factories increased protections such as the right to refuse unsafe work – something that could have saved the Rana Plaza disaster. In addition, it requires monetary commitments from global corporations to fund the repairs and renovations factories.

Most importantly, the Accord is legally binding, which means that global brands can now be held accountable in court for their operations abroad. Thanks to public pressure, this Accord has now been signed by over a hundred global clothing brands. This includes groups such as H&M, Calvin Klein, Tommy Hilfiger and even Canada’s Loblaws’ Joe Fresh.

However, corporate culprits Walmart and Gap have started a parallel safety initiative instead of joining the Accord. Along with 20 other brands, the Alliance for Bangladesh Worker Safety was created with hopes to also offer improved safety and better working conditions for factory workers. Despite the promises, the Alliance initiative lacks the rigour of the Bangladesh Accord, provisions for forming unions and more importantly, is not legally binding.

This corporately regulated voluntary initiative was drafted without consultation with unions and cannot be enforced by worker representatives – this leaves all the power with the companies. It was private regulation schemes that lead to disastrous results in the first place; it’s hard to see how a similar program could be a solution to the problem.

Many have dismissed the Walmart/Gap initiative as simply a public relations exercise. NGO’s such as CleanClothes, United Students Against Sweatshops, Macquila Solidarity Network and LaborRights have already called for and started campaigns urging them to sign up for the Bangladesh Accord. Leading US labour federations AFL-CIO and ChangeToWin jointly declared the Alliance initiative to be “weak and worthless”. In contrast, the Bangladesh Accord has been accepted by the UN Secretary General, EU and trade unions both globally and locally in Bangladesh.

So what are we to do in light of all these developments? Our best course of action is to pressure Walmart/Gap and associated retailers to sign onto the legally binding Bangladesh Accord. Consumers have a better case to make as competing brands have already signed on to it and thus deserve recognition and preferential treatment by ethical buyers.

Assisting campaigns calling for implementation of the Accord is our best bet. One of the most effective ways of doing so is personally delivering a letter to your local Walmart/Gap. Simply not buying from them isn’t effective as it won’t get the message across. Emailing these corporations, posting on their Facebook/Twitter and signing onto petitions are also effective methods. Whether it be raising awareness through social media or just talking about it with your friends – anything which puts pressure on corporations to invest in worker safety is key.

As I watched footage of overworked factory workers being pulled out of the rubble, I couldn’t help but wonder if the very clothes in my closet originated from that factory. It is our collective demand for cheap fashion that has empowered corporations to push factory owners beyond their safety limits. It is, therefore, our responsibility to call on these companies to implement radical reforms to ensure worker safety, ethical pricing and fair-wages.

Why We Need to Rethink How We Shop