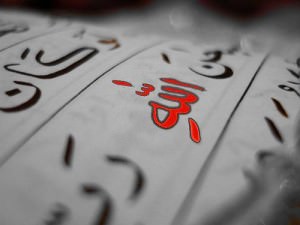 There has been a certain reluctance on the part of classical scholars when it comes to defining love (mahabbah). It is not that they haven’t tried, but that the definitions have tended to be causes, symptoms, effects or consequences of love, instead of love itself. A general description of love as mayl or “inclination” aside, some have felt that those who have attempted to define love have done so in terms of their own experience, or dhawq; or to the extent of their own yearning for God, or shawq.

Such hesitancy is found in Ibn Qayyim al-Jawziyyah who, when discussing the matter of love, chooses not to give his own definition, but instead lists thirty suggestions of others’; noting how they are either incomplete definitions or are descriptive of love’s consequences. The only definition to gain near acceptance (though not quite a definition) is a rather lyrical description from a young Junayd al-Baghdadi who speaks about the self-effacement of the lover of God in the worship and service of Him.

Thus, in winding-up his attempts at defining love, Ibn Qayyim al-Jawziyyah says: ‘The Thirtieth – being the most comprehensive of what is said about it: Abu Bakr al-Kattani related that a discussion concerning love took place in Makkah – may God, exalted is He, honour it – during the pilgrimage season. The shuyookh spoke about it, with Junayd being the youngest of them. They asked him: Tell us what you think, Iraqi! He lowered his head and his eyes filled with tears. He then said: “When the servant is effaced from himself, united in his Lord’s remembrance, renders what is due to Him, and sees Him with his heart, [then] his heart is set ablaze by the lights of divine awe, and his drinking from the cup of divine love is made pure, and the Compeller lifts the veil of the unseen to him. When he speaks, he speaks through God. When he utters, he utters about God. When he moves, he moves by God’s bidding. When he is resting, he rests with God. So he is for God, by God and with God!” The shuyookh burst into tears, saying: What more can be said. May God reward you, O crown of the gnostics.’1

However love is to be defined, at its heart is the idea of ma‘rifat al-kamal – ‘recognising perfection’. One of the great doors for man to nurture a deep and abiding love of God is appreciation of God’s acts of kindness and beneficence towards His creation. ‘Hearts,’ it has been said, ‘have been created with a natural disposition to love those who do good to them.’ As this appreciation deepens, the lover is lead to a still greater door: the door of ma‘rifat al-kamal – recognition of God’s utter beauty and perfection in terms of His acts (af‘al), attributes (sifat) and essence (dhat). In one celebrated hadith, we read: ‘God is beautiful and loves beauty.’2

‘The greatest way of knowing God is to know the Lord via His beauty, transcendent is He: which is how the elite from creation know Him. The rest know Him through one of His attributes, while the most perfect of them know Him by way of His perfection, awe and beauty – [whilst affirming that] there is nothing that even remotely resembles Him in terms of attributes. Now if, for argument’s sake, all the creation had beautiful forms, then the most beautiful of them (inwardly and outwardly) when compared to the Lord’s beauty, would be dimmer than the dimmest candlelight as compared to the blazing radiance of the sun. It suffices [to know] about His beauty that “If He were to remove the veil from His Face, the splendour of His countenance would consume His creation as far as His gaze extends.”3 It [also] suffices that every beauty, inner or outer, in this world or the Afterlife, is His handiwork. What then of the beauty of the Creator of such handiwork?’4

Such is the significance of ma‘rifat al-kamal, that in almost every verse of the Majestic Qur’an there is mention of God’s beautiful acts and perfect attributes. For God wants the recognition of His perfection so that it leads to the love of His very essence; that is, to the love of Him.