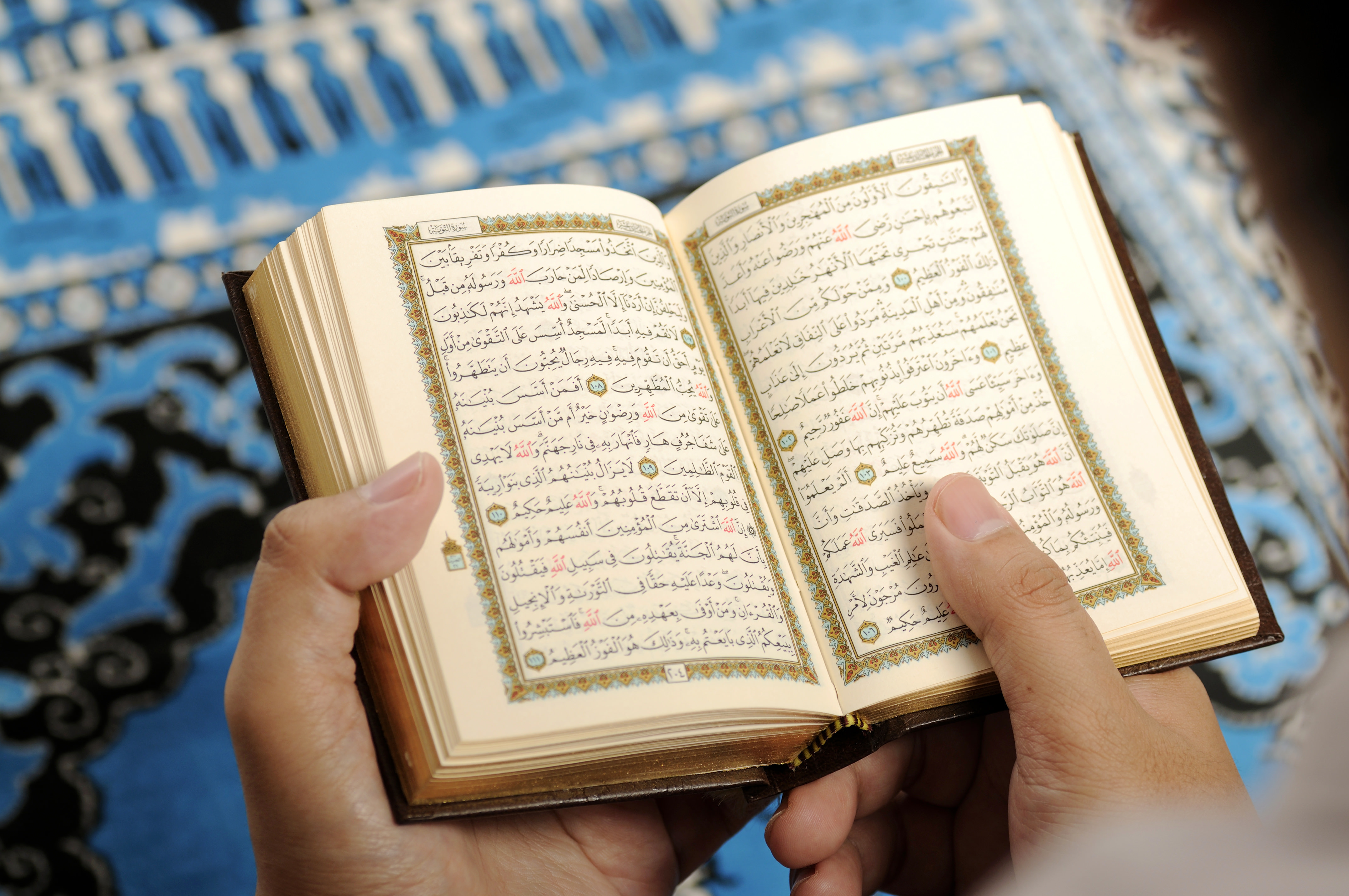 The seerah of the Prophet

gives us consolation in these turbulent times.

was an orphan, and so it was ordained that orphans be respected after him in every land, and under every sky.

experienced Mecca, and experienced the weakness there, and fear, and when the people of Makkah plotted against him such that they would kill him while he slept.  And that the responsibility of his blood would be shared amongst the Arab tribes. When he left that night, leaving the land that was most beloved to him, he did not think that he would return in eight years, victorious, at the head of 10,000 companions.

From the Story of Yousuf

Recognize that the hand of Allah

works in Its own way.  When Yousuf [alays] was imprisoned, reflect on that, Yousuf is imprisoned! When The Prophet

“And [subsequently] the king said, “Indeed, I have seen [in a dream] seven fat cows being eaten by seven [that were] lean, and seven green spikes [of grain] and others [that were] dry. O eminent ones, explain to me my vision, if you should interpret visions.” (Yousuf: 43)

So reflect on how the hand of God was working. That no one would be able to interpret the dream of the king except the one whom He had taught the interpretation of dreams.

They said, “[It is but] a mixture of false dreams, and we are not learned in the interpretation of dreams.” But the one who was freed and remembered after a time said, “I will inform you of its interpretation, so send me forth. [He said], “Yousuf, O man of truth…” (Yousuf: 43-45)

From the Story of the Sacrifice of Ibrahim

When Ibraheem was laying Isma’eel on his forehead, so that their eyes would not meet.  For, if Ibrahim were to lay him on his back and the eyes of his son were to meet his that might cause him an internal earthquake.  And so that son, recognizing the love of his father, told his father to lay him down on his front, and said, “Oh my father due what you wish, you will find me in sha Allah from the patient”.  Did it occur to Ibrahim in his wildest imagination that as he was placing his son to be slaughtered, that in that moment, a ram was being prepared in Jannah for him to slaughter instead?

When he removed from himself all ego, all personal want and desire, all love of everything else..

But what was the introduction, before him achieving that status?

“And [mention, O Muhammad], when Abraham was tried by his Lord with commands and he fulfilled them.” (Baqarah: 124)

You will find in the book of your Lord, that which will give you much consolation for these times.

From the Battle of Uhud

After the battle of Uhud verses were revealed that gave the believers much consolation.

“So do not weaken and do not grieve, and you will be superior if you are [true] believers.”

They are coming back from a battle in which 70 of them were killed, many of them were injured yet Allah is saying they are superior.  Superiority is not just in material means alone, but superiority is also that you be firm upon your iman and steadfast upon the truth.

“If a wound should touch you – there has already touched the [opposing] people a wound similar to it.” (Al-Imran: 140)

They are wounded as well, but your wounds are not like their wounds.

“If you should be suffering – so are they suffering as you are suffering, but you expect from Allah that which they expect not. And Allah is ever Knowing and Wise.” (Al-Nisaa: 104)

Say, “Do you await for us except one of the two best things while we await for you that Allah will afflict you with punishment from Himself or at our hands? So wait; indeed we, along with you, are waiting.” (At-Tawbah 53)

The believer is always in a state of goodness…

When Ibn Taymiyyah was jailed, and the guard shut the door, he recited,

“And a wall will be placed between them with a door, its interior containing mercy, but on the outside of it is torment.” (Al-Hadeed: 13)

And then he said, “What can my enemies do to me, my paradise is in my iman, and my iman is in my chest, my imprisonment is solitude with my Lord, my expulsion is tourism and my execution is martyrdom. So what can they do to me?”

Some of those who lived in Egypt in the 1970’s lived in constant oppression and persecution.  And when that environment changed they began to belittle their worship, so much so that they deemed insignificant their actions and their salah.

They did not feel that their worship was worth anything in such ease.  However, the changing of environment allows the believer to transform from one manifestation of servitude to another, servitude is not only manifested in being persecuted and besieged for your belief.

So when Allah places a slave in ease, that allows for them to experience other colors of servitude; seeking knowledge, teaching others, recitation of the Quran, learning a new language that when your life’s journey takes you to interact with a people they find you able to speak their tongue and articulate to them the message that you carry!

Sometimes when times are bad, people begin to direct blame at each other.

said, “Prepare food for Jafar’s family for today they are beside themselves with grief.”

This is not the time for blame, not at all.  It is not the time, when a father has lost his daughter, a mother is grieving her son, that blame be cast.  The companions used to find in the words of The Prophet

that which would bring them ease, comfort and consolation.  The Prophet

left the family of Ja’far to mourn for three days and then came to them saying, “Do not mourn my brother after today.”  The mother of Ja’far’s children complained to The Prophet

of their being orphans.  Look at what The Prophet

responded to her, look at the beauty of his consoling when he said,

“Do you fear them being orphans when I am their custodian (wali) in this world and the next?”

The first generation used to live these beautiful values.

It’s not about personalities. Don’t tie yourself to them.

Of the lessons is also that it’s not about any particular person, no matter how great.  The sahabah learned that lesson at the battle of Uhud as well.

“Muhammad is not but a messenger. [Other] messengers have passed on before him. So if he was to die or be killed, would you turn back on your heels [to unbelief]? And he who turns back on his heels will never harm Allah at all; but Allah will reward the grateful.” (Al-Imran: 144)

On the Wisdom behind the Rumors of the Rasul’s Death

was killed. That rumor was a divine remedy to cure souls that were exhausted and defeated.

“So Allah repaid you with distress upon distress so you would not grieve for that which had escaped you [of victory and spoils of war] or [for] that which had befallen you [of injury and death]. And Allah is [fully] acquainted with what you do.” (Al-Imran: 153)

The first distress: The loss of life, wounds, loss of spoils of war and loss of victory.

The second distress: The rumor that The Prophet

was killed.  How is this a divine remedy?

The first distress was an overwhelming distress, the distress of 70 companions martyred and so many injured, as well as the loss of victory and spoils of war, however Allah sent them a rumored distress, not an actual one, that totally eclipses the first distress.  The sahabah could not imagine living in a world that was not beautified by the breath of the Prophet

amongst them.  Hence, when Allah lifted the second (and greater) distress from them, the first distress no longer seemed overwhelming.

“Then after distress, He sent down upon you security [in the form of] drowsiness, overcoming a faction of you, while another faction worried about themselves, thinking of Allah other than the truth – the thought of ignorance, saying, “Is there anything for us [to have done] in this matter?” Say, “Indeed, the matter belongs completely to Allah.”  (Al-Imran: 154)

Then after that distress, He gave them security in the form of drowsiness.  Drowsiness in the environment of a battlefield is from Allah, and drowsiness in salaah and gatherings of dhikr are from shaytaan.  And then some of the munafiqoun, as if criticizing the leadership of The Messenger of Allah

They say, “If there was anything we could have done in the matter, some of us would not have been killed right here.” (Al-Imran: 154)

that he should not have met the mushrikeen at Uhud in open battle.  But Allah belies them saying,

“Say, “even if you had been inside your houses, those decreed to be killed would have come out to their death beds.” [It was] so that Allah might test what is in your breasts and purify what is in your hearts. And Allah is Knowing of that within the breasts.” (Al-Imran: 154)

The affair of the believer is always good.

And so the believer always journeys between the two manifestations of servitude; patience and thankfulness.

Do not doubt for a moment that you are upon the truth.  And know that Allah says,

“And We made from among them leaders guiding by Our command when they were patient and [when] they were certain of Our signs.” (As-Sajadah 24)

So leadership, imamah, in the religion is acquired with the two ingredients of patience and certainty.

Allah Sees the Best In Us

Chaplain Chats | The Different Recitations of the Quran