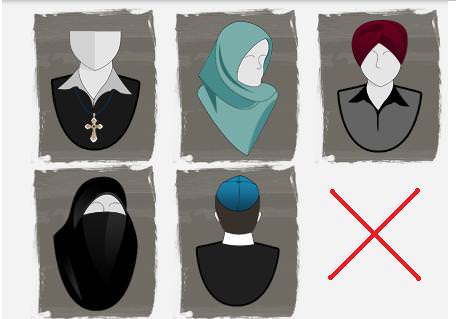 The political discourse in Canada over the past few weeks has been dominated by Quebec government’s proposal for a secular ‘Charter of Values’, put forth by the ruling Parti Quebecois (PQ). The most controversial aspect of the proposal is the ban on civil servants wearing religious clothing to ensure ‘religious neutrality’ of the state. The debate reached its climax this past Tuesday with the unveiling of appalling pictograms outlining how public employees can dress.

The proposed legislation is supposed to ban public employees from wearing headscarves, face veils, turbans, skullcaps and large crosses (small ones are okay). Whether it is a doctor at a hospital wearing a turban, or a hijab donning worker at a daycare – they will have to decide between work and religion. This militant and deviant expression of secularism fell short of just banning beards- it’s hypocritical, racist and self-contradictory.

The PQ claims it is doing so to maintain ‘religious neutrality’. If that is the case then it should perhaps start by banning the provinces’ most overt religious symbol: its flag.

Also known as the Fleurdelisé, Quebec’s flag, with its four fleurs-de-lis and a cross, is a beautiful expression of Christian symbolism. Historically associated with French Roman Catholic monarchs, the white fleur-de-lis symbolizes religious purity and chastity. The three petals are widely considered to represent the Holy Trinity; the band on the bottom represents Mary. Images of the Virgin Mary carrying the flower in her right hand are standard portrayals in Christian art.

Hypocrisy of the proposed legislation becomes evident when the more obvious issues that theoretically impact ‘religious neutrality’ are left unquestioned. Examples of this include the gigantic cross in the National Assembly, taking an oath on the Bible or Christmas trees. Will the government stop funding Catholic schools to attain this neutrality? What about funding for chaplaincy services? It appears Ms. Marios’ government is unable to distinguish between the concepts of a secular state and the inevitable interaction of that state between itself and religious agencies.

But the Quebec government is obviously not that uneducated. And that’s where the racist element comes in. Banning civil servants from wearing religious symbols doesn’t amend any supposed shortcomings of Quebec’s secularism. One can hold strong religious views without displaying it on their sleeves. In fact, there have been instance of justices refusing to marry same sex couples because they were opposed to gay marriage – they weren’t wearing a niqab when they did so. Claiming to champion secularism is simply PQ’s way to brazenly discriminate against minority groups with hopes of gathering support through identity politics.

Furthermore, this proposed legislation is self-contradictory. It effectively creates two classes of citizens; one which is noble enough to become civil servants and the other one is deprived of this privilege. The province is thus not ‘neutral’ by any standards – it’s openly saying that religious people ‘need not apply’. Even voicing such outrageous views, let alone implementing them, creates an unhealthy segregated society. If religious minorities can’t participate in public life, how could they ever hope to blossom into our social fabric? What is even scarier is that the PQ is pushing this charter on the private sector as well – this is the textbook definition of systematic discrimination.

Parti Quebecois is well aware that their proposals are so blatantly unconstitutional that they will be shot down by the courts. But that doesn’t matter as the objective of this political exercise has already been achieved; even if it meant having to stoop to an all time low. The old game of identity politics has allowed the party to stir up enough support from its small nationalist constituency to survive the next election.

One of the ironic aspects of this repulsive ‘Charter of Quebec Values’ is that it has indirectly helped exemplify values that most Canadians share. Editorials of all major newspapers are filled with condemnations of the charter. Politicians from all facets have openly opposed it. From leader of the opposition, Thomas Mulcair, to Liberal Leader Justin Trudeau – even the notorious Minister Jason Kenney, released a picture of him wearing sikh headwear. The political leadership of Montreal, Quebec’s biggest city and economic hub, unanimously denounced the charter and thousands rallied against it. Even within the PQ there were dissenters; MP Maria Mourani was expelled from caucus for her opposition to this edict. In a rather innovative spirit to lure doctors, Ontario’s Lakeridge Hospital released a recruitment poster with a hijab wearing woman stating, “We don’t care what’s on your head; we care what’s in it.”

Despite the lunacy of this entire episode, it’s important to resist the temptation to stereotype Quebeckers as intolerant and narrow-minded. During my short time there, I found the Quebecois to be a warm-hearted and friendly people. Whether it was the affectionate ‘Bon Appétit’ from the lunch lady at Université Laval, the student protesters who gave me their iconic red square to wear, or my gracious French teacher who put up with my non-existent language skills; I have nothing but good memories. Let’s hope this debacle is forgotten as a cheap political gimmick which has unfortunately brought unprecedented shame to Quebec and the rest of Canada.