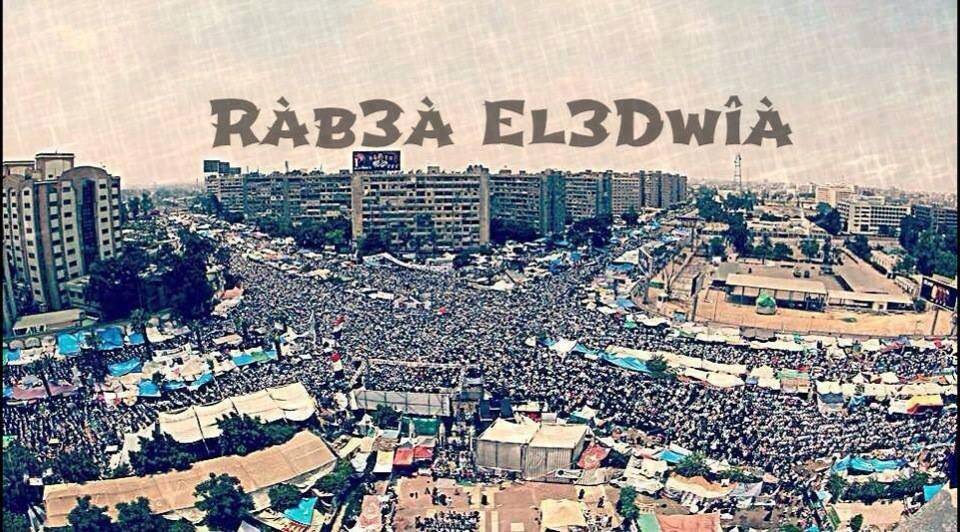 Notice: Some of the following images and videos are very graphic and violent

Hundreds or thousands dead, thousands wounded and millions terrorised. When numbers become this large, it becomes difficult to digest the scale of the massacre that took place and is still taking place in Egypt today.
Stalin once very perceptively said, “the death of one man is a tragedy, but the death of millions is merely a statistic.” The human brain is not able to process the extent of suffering and trauma involved in a massacre so when we hear about it, we find it hard to truly appreciate what happened. In an attempt to get past this, I present to you 7 stories from the recent massacre in Egypt. 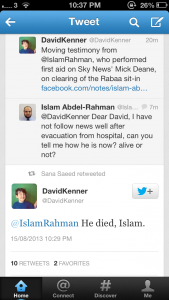 Dr Islam is a man with many hats. Anesthesiologist, politician, foreign affairs specialist… freedom fighter. He was present when the massacre started and in an incredibly moving account, describes the carnage that he witnessed that day. It must take something special to make a seasoned doctor feel numb.

Throughout the day, Dr Islam was helping the wounded. One of those he helped was a British cameraman for Sky News named Mick Deane. The father of two was shot through the chest in a coordinated attempt by the army to target reporters to prevent the world seeing the bloodbath unfold. This twitter exchange between him and a journalist a day after the massacre just goes to show the insanity of what went on – and the little rays of humanity that give the rest of us hope.

A man murdered by his own relative

This video is of a man whose brother was killed in the massacre by the Egyptian army. He is one of thousands that lost loved ones that day. What makes him different to the others is his surname – Sissi. Yes, he is a relative of the man who ordered the massacre itself.

By ordering the massacre that killed thousands including his own relative – Sissi achieved a double whammy.

A marriage made for heaven

A photojournalist hopes to capture moments of importance so that he can relay the message to the rest of the world. Ahmed Asem was no different. Popular and well liked, he was taking a video of an earlier massacre of peaceful protesters when the sniper he was capturing on film, turned to face him and shot him dead.

The martyr Ahmed was due to be married. His fiancee Sarah was protesting in Rabaa. She was heartbroken by the loss of her husband-to-be but this did not dim her resolve or her love. On the morning of the massacre at Rabaa, her body was found amongst the dead. One can only imagine the sadness of the two families who were due to be coming together for the marriage of their children and instead buried both. Truly theirs match was one made for heaven.

Meet Mustafa. He is a young child who either cannot speak or has lost the ability to do so after the horrors he witnessed. They found him in the Imam mosque where hundreds of the bodies of massacred civilians

were taken to avoid being burnt by the Egypt police and army. He lay asleep amongst the dead bodies and they are unsure if his father or mother are amongst them as there are still bodies burnt beyond recognition there.

I have no idea what happened to this poor young boy who slept amongst the corpses. He is just another statistic in the massacre of those who dared to stand against the coup. Even so, the thought of his fate will keep me awake for years to come.

A mother and a wife is neither anymore

One of the most haunting images to come out of the whole massacre for me was this one. I don’t know her name. I can’t even see her face. But somehow it is all the more heartbreaking because of it. She sits next to 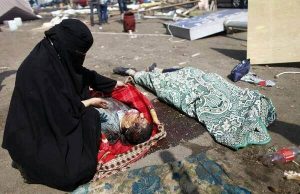 the body of her young son holding his hand. She cannot bring herself to let it go even though her baby boy she brought into this world has now been taken from her. Next to them is the body of her husband also covered in a sheet. The blood of father and son intermingled on the pavement of Rabaa.

Can you imagine the pain and suffering she is going through? She lost her present and her future in one morning. Their crime was only that they were against the coup, that they were Islamic. No human being deserves this. No one.

How to terrorise the dead

At the mosque that was turned into a mass morgue, the blood of the bodies seeped deep into the carpet. The 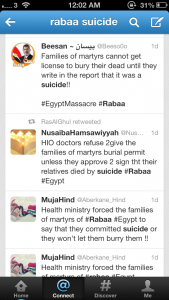 relatives of the victims were desperate to arrange for burial as dictated by Islamic law. Unfortunately for them, the death certificate would not be issued by Ministry of Health doctors unless the family accepted the cause of death as “suicide.” They are hoping that the bodies will decompose rapidly in the heat thereby forcing the anguished families to accept this blatant injustice.

The brother of one of the dead screamed in anguish. “You hurt them when they were alive, now you want to punish them when they are dead? Are you animals or human beings?” Indeed – when faced with such psychopathic actions it is becoming difficult to tell.

A child cries for his mother

Despite what the media and the coup supporters say, neither he or his mother were terrorists. None of them burnt down any churches. They were not paid agents from a foreign country. They were not fanatics who tortured people. They were a mother and child who opposed the coup. Apparently, in Egypt 2013 the punishment for that is death.

If you read this article and have been watching the news and feel disheartened, I would like to finish on an upbeat note from Allah himself for just such occasions:

‘Do you think that you shall enter the gardens of Bliss without such (trials) as came to those who passed away before you?
They encountered suffering and adversity and they were shaken, that even the messenger and those who believed with him cried,
When will come the help of Allah?
Verily, the help of Allah is near!”