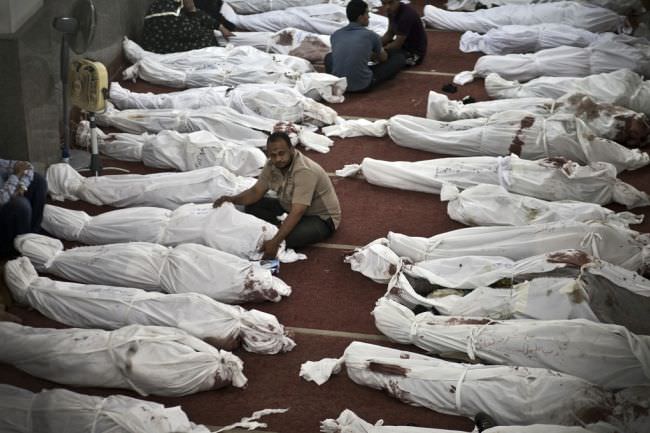 Over the past two and a half years, Egyptians have become fairly desensitized to violence on the streets of their capital. Prior to 2011, virtually any crime beyond petty theft – let alone violent flare ups in public squares or massive processions against the authorities du jour – grabbed the attention of the Egyptian populace; it was simply outside the norm. Today, lawlessness is rampant, a day without a “million man” protest is unusual, and “molotov” and “birdshot” are as ever present in the Egyptian lexicon as “fuul” and “ta3miyya.”

Yet, even given this more jaded context, the events of the past few days were utterly shocking.

The latest official figures, aggregated from Ministry of Health and newspaper sources, indicate nearly 1,300 people killed from August 14 – August 16 — the vast majority of whom were peaceful protesters in Cairo, Alexandria and other governorates.

To put that in context, the death toll throughout the vaunted – and violent – eighteen days of the January 25 uprising didn’t pass 850. The numbers are, as one can imagine, historic. As The Atlantic notes, August 14, 2013 was “one of the deadliest single-day instances of police-on-protester violence since Tiananmen Square.”

There are, naturally, many who are rightly outraged by the crackdowns on anti-military protesters, particularly with regard to the Raba’a mosque sit-in. Governments around the globe condemned the excessive use of force, a sentiment echoed by human rights organizations and the United Nations.

This – let’s just call it what it is – massacre has also triggered a crisis of conscience among at least two high profile figures that have adamantly supported the army’s actions since the July 3 coup. On Wednesday, Mohamed ElBaradei resigned as interim vice president, saying that he “cannot bear responsibility for one drop of blood,” while word came on Friday that National Salvation Front spokesman, Khaled Dawoud, resigned in response to his organization’s failure to condemn the army’s violence. Dawoud later clarified that the turning point for him came when he saw the scores of dead bodies at the Al Iman mosque, where victims of the Raba’a crackdown were sent when fires engulfed the makeshift hospitals and morgues.

One wonders, however, what exactly ElBaradei and Dawoud expected when they backed the military overthrow of a democratically elected president.

While there are many individuals, organizations and countries that have taken a principled stand against the security forces’ brazen disregard for innocent lives, these condemnations are largely – and sadly – falling on deaf ears in Egypt.

This is especially the case with the junta led government. Far from realizing the devastation their actions have wrought, officials have done away with any pretense of humanity and given security forces the green light to use live ammunition at will. This declaration has, of course, been roundly cheered throughout Egyptian media (which has served as a state mouthpiece since the coup) to the extent that each channel now displays banners (alternatively in English and Arabic) declaring variations of “Egypt Fights Terrorism.”

Needless to say, the constant drumbeat of this Orwellian message has permeated deep into Egyptian society. It’s likely that most Egyptians fully support the crackdown on the Muslim Brotherhood, their supporters, and anyone else who is against the current military-led regime. In fact, a sizable percentage of the population seems to want security forces to take an even harsher stance against the “terrorists.” As disheartening as this circumstance is, the fact that generally respectable academics are whitewashing the military’s actions while regional powers outright support the brutal assault on protesters makes it likely that more egregious crimes against humanity are yet to come.

One Foot Over the Brink

A sort of “exceptionalism” has taken hold of Egyptians recently. It’s led them to believe that they can, for example, escape the laws of political science when it comes to the dismal repercussions of military coups. This “too big to fail” mentality has also led Egyptians to believe they are immune from the tumult that has engulfed other countries in the region.

Indeed, not long ago, if you mentioned “Egypt” and “civil war” in the same breath, you were assumed an alarmist with a penchant for sensationalism. Today, human rights experts proclaim that Egypt looks “depressingly like Iraq” while one of the premiere bloggers in Cairo compares the Egyptian army’s strategy towards the Brotherhood to Bashar Al-Assad’s approach to protesters early on in the Syria conflict.

So, to put it bluntly: Egypt is not special.

The sooner that all parties realize that the country doesn’t have some magical immunity from catastrophe, the sooner we can perhaps pull back from a descent that could cripple the state and the region for a generation or more.

Until then, expect nothing but sloganeering and higher body counts.

Surat al-Hashr – Who is Allah? 99 Beautiful Names of Allah