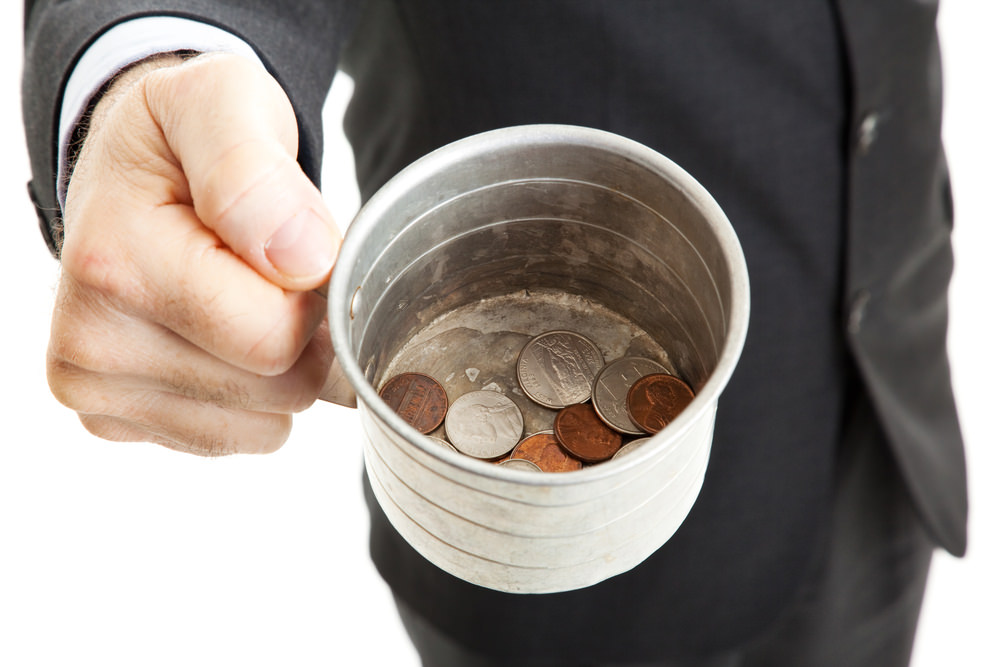 My little brother yelled at me again on Friday: “Expansion… growth… your children!.. bublic schools!!.. Zina!!!”. Feeling guilty for not intervening sooner, I thumbed through my cash and did what families do when encountered by addiction. “Dude, calm down—here’s  a twenty.” He gave me an unctuous smile; we both knew I was holding out.

Our aspirational masjid’s Ramadan mantra is: “You will lend unto Allah a goodly loan of half a million this year.” A new parking lot, community hall, barrier reinforcement, security, AC – it’s all posted in the lobby. Each passive aggressive khutbah offers a unique tafseer using the same guilt-based subtext. No announcement is complete without a plea to fill the coffers on your way out the door. Then there’s the Big One – on one of the odd nights, in the middle of taraweeh. The Senior Beggar takes the microphone with threats that utilities will be shut off, and our children will apostate if someone doesn’t immediately donate $10,000. He rampantly sells off shares of Jannah. Invoking debts, pleading, yelling, auctioning, shaming – it’s all part of the show.

Giving money should be an act of grace, not fear or entertainment. We need a new approach. And a new way of thinking.

This year, on the night that your masjid would do his best begging, I propose that it instead gives everyone a US $100 bill as they walk in. No contracts. No Hellfire speeches.

If they keep it, they need it (more than we think). Everyone wins. Congratulations Mr. Masjid, you have finally achieved your purpose in life: to build people, not yourself. If some people give it back, especially on those nights, they will feel wealthier than Bill Gates. They were not planning on giving, perhaps for lack of funds, but on that special night, they made a tough decision and ultimately gave $100 to the Masjid. That is more than most donate in a whole year. The last group will give it back with a little extra. Allah will reward all of them, but in the end, your masjid wins.

Fundgiving taps into a little bit of magic known as barakah. When you add barakah to something, then double-entry accounting fails. It really doesn’t matter how much you get back. Something extraordinary will happen—you  will find more barakah in that wealth. Money that comes from soft hearts who believe in your success story will always go further than money begged for, regardless of the amount.

Fundgiving should be the biggest return every year. Give scholarships with no strings attached that night and let the students tell the audience where they will go. Announce the business project winners for the new Mo$que Incubator (see video at end of post). How about spot Awards for a few people that have gone above and beyond the call of membership? Let’s build people first—then spaces.

“…this is the only night we fundraise!”

“…how are we supposed to cover our expenses for the year?”

“…you make fundraising sound so evil! Rather, it’s an opportunity for people to spend for the sake of Allah.”

If fundraising is an opportunity, at least consider the time and place. The last nights of Ramadan are a time of introspection, long prayers, reading Qur’an, and making du’ā. If fundraising in Ramadan is the ONLY opportunity (red flag!) to meet annual expenses, it is likely that your masjid doesn’t provide enough services that appeal to the community for the other 11 months of the year.

The real issue here is tawakkul. Sure, some people will give a lot – the masjid is addicted to them. True growth and sustainability comes from hundreds or thousands of hearts that are drawn to institutions that make a daily difference in society (i.e. not just the Muslims). Non-profits earn their donations by communicating how they’ve changed lives again and again. The masjid exists to point people to Allah and usher their spiritual development, not to spiritually blackmail them for $1,000.

If we don’t flip the script, then we will become the uncles that we’re trying to replace. Fortunately, a little goes a long way. Work smart, with the right intention, and Allah

will provide. Try something different this month. Instead of enabling an addiction, let’s help our little brother tangibly serve his people. What do we have to lose?

Who are you really afraid of?

Change the Life of an Orphan

Parents at Taraweeh – Making it Work