I walked into an interesting conversation the other day between a middle-aged woman and her teenage daughter.  It was happening in front of a ladies room mirror, and it went like this:

Daughter, sulking: No, I’m not.

Mother: You are, I can see you are.

Mother: What is it?

Daughter: Whatever you have in your purse.

The mother paused and looked irritably at her daughter.  Then she said “Fine, let’s go.”

I felt sorry for the mother because I had just witnessed her losing a round in the epic battle of mother vs. the world.  I would guess that she is trying to raise her daughter with conservative cultural values- where teenagers don’t wear makeup and grownups try not to wear too much of it.  I’m afraid she’s fighting a losing battle though, not because it’s impossible to raise modest women in these insanely immodest times, but because there’s a bit of a flaw in her rules.  My mother tried to raise me with the same rules, but it took my own five year old daughter to help me spot the problem with it. The conversation went like this:

Iman: Momma, can I wear lipstick?

Me: Makeup is err… umm… let me think about that and get back to you, ok?

I had to sit down and have a think- would I tell her the same thing that my mother told me, that I could start wearing makeup when I was sixteen and not to ask her again until then?

How could I even begin to answer her?  Whether or not to wear makeup is a complicated question involving Muslim standards for modesty, the human mechanics of sexual attraction, acceptance of natural beauty, and conservative use of augmented beauty within Islamically acceptable parameters.

Makeup is not haram any more than clothes are.  Both clothes and makeup can be used to conceal, or highlight, or beautify and there is nothing intrinsically wrong with concealing, highlighting or beautifying yourself. Makeup is used to enhance a woman’s sexual appeal and attractiveness, and there is nothing haram with having sex appeal or being attractive.  What’s haram is the misuse of sex appeal- of making it a public display versus an intimate connection between spouses.

I suppose we could beat around the bush and say makeup is about feeling pretty or confident, but “pretty” is a vague concept, and science has unraveled the mysteries of “pretty” and simplified them as such: 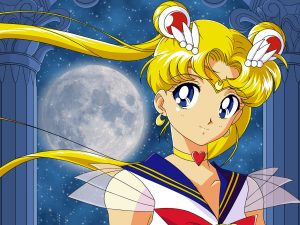 Understanding the science behind sexual attraction helps explain why women in anime have such impossibly large eyes on such infant-like faces, and why the cosmetics industry sells products to give us large eyes on faces with flawless, baby-soft skin.

Women are held to standards that are impossible to achieve without photoshop- they use makeup to get themselves halfway there and then feel ashamed for not making it all the way.  Some “fix” the problem with surgery, as if their faces were a problem in the first place.  We are asked to believe that anything is forgivable if you’re beautiful enough, that personality, intellect and personal accomplishment aren’t worth anything unless attractively packaged, and that their primary pursuit in life- from puberty until menopause- should be the attainment and maintenance of beauty.

I don’t want my daughter growing up and hating the imperfections in her own face like so many women do.  I want her to look at her face as what it is- an assortment of beauties and flaws that reflects only a temporary phase in her existence that is in no way indicative of her worth as a Muslim and a woman. 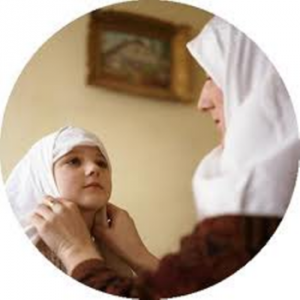 Real beauty is a matter of character, not sexual attractiveness. Photo courtesy of islamonline.net

I want her to know that there is an important difference between beauty and attractiveness.  Real beauty is a matter of character, but attractiveness is a matter of hormones.  Makeup tricks men’s hormones into thinking you are younger, healthier, more symmetrical and therefore more appealing to the testosterone-fed animal that lives inside of them.  Women and men both have animal desires, but the animal within us is not the master, it is meant to be domesticated and put to good work, tilling the field so to speak.

So, how did I respond to my daughter? The conversation went like this:

Me: Iman, I’ve decided you can wear makeup.

Me: Yes, but there are some rules. You can only wear makeup in the house, and if a man or a boy comes over, we need to wash it off.

Me: You can wear makeup to parties where there are only ladies or girls.  I cover my face when I’m on the way to a party, but you don’t need to do that.  We can just put your makeup on when we get there. Also, if you wear too much makeup, you’ll look silly, so just wear a little, ok?

I took out my cosmetics and applied some kajal to Iman’s eyes and some pink sparkles to her lips.  She asked for the purple glitter, and we used it to draw a butterfly on her cheek.  In turn, she coated the upper half of my face in eye shadow and the lower half in lip gloss.  She was proud of her work and I was proud of her creative use of every color in the box.  We washed our faces before going out for groceries later that day, and when I asked her if she wanted to put makeup on when she got back home, she said no thank you because the plumping gloss she chose was “spicy.”

We have an understanding about makeup, and it goes like this:  I don’t offer Iman makeup, I wait for her to ask for it and if we’re able to follow the rules, then the answer is always yes.  No makeup outside, except among ladies.  Makeup at home is ok, but not front of men other than Baba or your brother.  Try not to wear too much, and always ask Momma first. 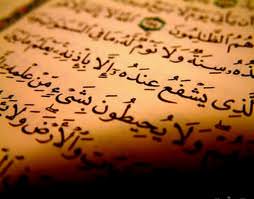 And tell the believing women to lower their gaze and be modest, and to display of their adornment only that which is apparent, and to draw their veils over their bosoms, and not to reveal their adornment save to their own husbands or fathers or husbands’ fathers, or their sons or their husbands’ sons, or their brothers or their brothers’ sons or sisters’ sons, or their women, or their slaves, or male attendants who lack vigour, or children who know naught of women’s nakedness. And let them not stamp their feet so as to reveal what they hide of their adornment. And turn unto Allah together, O believers, in order that ye may succeed. The Holy Qur’an, 24:31

I’m sure there will be room for improvement in our rules, but I am satisfied that at least we’ve escaped the hypocrisy of the made-up mother scolding her daughter for wearing her own makeup.  I’m also relieved to have escaped the arbitrary assignment of sixteen being an acceptable age to start making yourself look sexy in public.  That is where my mother’s rules were flawed.  From a Muslim point of view, there really is no acceptable age at which you can start making yourself look sexy in public.

While physical modesty is only one aspect of appropriate Muslim behavior, I’m glad I’ve had the chance to set the standard for my daughter now.  When she gets older, we’ll talk about modesty of character, speech, behaviour, and dress.  When we have that conversation, we’ll also talk about sex, attractiveness, and how hard it’s going to be for my young woman to remain natural and modest in a naked and unnatural world, but that’s a conversation for later.

For now, we’re using makeup the same way we use crayons- to color, experiment, and laugh together.  For now, the lipstick is too spicy and the glitter eyeliner is used for drawing butterflies, and I hope it stays that way for as long as possible, InshaAllah.

The Delights of a Kid Focused Ramadan