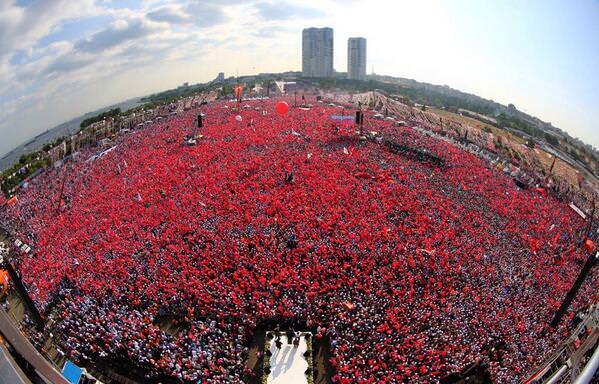 To all those who were sympathetic to the protests in Turkey, it can sometimes feel like you’re living in a different world from your opponents. After all, the media portrays you as artistic freedom loving environmentalist freedom fighters. They tell you time and time again that this is the Turkish spring and that you are the voice of the new young and free Turks leading your country back from the abyss of an autocratic and out of touch dictator. So why don’t the others see this? How could they possibly support Erdogan? Well, here are a few reasons (in no particular order) that I hope might help you understand why the majority of the Muslim world support Erdogan and not your protests.

1. Because the support of Islamophobes troubles us

To even the most jaded Muslim, it is disconcerting to see the whole-hearted support that the protesters have received from the who’s who of the neo-conservative and Islamophobic worlds. Most of these people have never once expressed an interest in Turkey except to decry any attempts for the nation to get more in touch with Islam. The fact that Robert Spencer (compared Muslims to Nazis), Pamella Geller (says Makkah and Madinah can be bombed), the Greek government (won’t allow the building of mosques) and Israel (no introduction needed) think that the protests are a good idea should make you reflect on exactly what they hope the protests will achieve.

2. Because the bias shown by the Western media is suspicious

The protesters were understandably upset when their actions didn’t make it on to all the Turkish TV stations. In fact, one of the abiding themes of the protest has been centered around the farce of one station showing a documentary on penguins instead of the protests. However, exactly the opposite situation took hold outside of Turkey with most Western media outlets giving non-stop rolling coverage of the protests and hastily dubbing it the “Turkish spring.” The bias was so stark that there was hardly any attempt at finding the opinion of the pro-Erdogan public. Add to this the complete lack of coverage of similar protests in Bangladesh (this time the protesters were Islamic orientated and thousands were actually killed during a media blackout) and you get more than a whiff of hypocrisy at play.

3. Because of the breath-taking hypocrisy of others

The European Union and others have quickly stood up to berate Turkey and Erdogan for the way they have handled the protests. It is true that the death of protesters (and a policeman) is unjustifiable and tragic. But Europe and America have had their fair share of protests in the past few years and they have dealt with them in a remarkably similar manner. Whether it is the anti-austerity riots in Athens, the Occupy protest on Wall Street or the student riots in London, the playbook has been exactly the same. So why have Turkey and Erdogan being singled out for criticism? Can it be that there is another agenda at play here? Many of us fear this is the case.

4. Because Erdogan made Turkey a force once more

For those with short memories, it was not long ago that Turkey was a backwater of Europe. It was the country of doner kebabs, belly dancers, military coups and spiralling inflation. It was a nation that was rejected by the West despite desperately trying to be part of it and rejecting the East because of its reminder of an Empire long gone. But in the last ten years, Erdogan has managed to pull off a remarkable transformation of the reputation of Turkey and the Turks both in the East and the West. It is now well respected as much for its economic development as the moral leadership it provides in the Islamic world. Today, Turkey sits near the top of the world stage as a voice to be reckoned with, a force in the world rather than a page in the history books. Trying to turn back the clock seems, at best, myopic.

5. Because some things can’t be measured

Even his most ardent critics have to admit that Erdogan and his colleagues have transformed Turkey from an economic laughing stock to one of the most powerful economies in the world. The stats are impressive: Reducing inflation from 65% to 6%, increasing the education budget 5 fold, repaying the IMF debt and making Turkey into one of the worlds leading tourist destinations are just some of the many achievements that would have been a dream a little more than 10 years ago. This is not just idle boasting. These results are concrete proof of a lack of corruption, enviable business acumen and true loyalty to the nation. The financial success is hard to overstate with many Turks (especially the rural majority) having adequate education, healthcare and social mobility within reach for the first time in generations. The only people who can so easily discount and trivialise this achievement are the upper classes who are comically displaying how out of touch they are with the previous suffering of the masses.

6. Because Hundreds of Millions across the world admire him

For more than 400 years, Turkey was the leader of the Muslim world. For reasons that are beyond the scope of this article, that relationship broke down spectacularly. In the last ten years, this has changed. When Muslims feel themselves abandoned in a tough situation, one of the few Muslim leaders who can be relied on to give moral support is Erdogan. Ask the Bangladeshi scholars who are on death row on politically motivated charges. Ask the Rohingya refugees who were visited by the Turkish Foreign Minister and Erdogan’s wife. Ask the Palestinians who he has pledged to support when others shun them. Ask the Egyptians, Tunisians and Libyans who Erdogan was one of the first Muslim leaders to speak up for. Ask the Syrian refugees who find safe haven in Turkey thanks to Erdogan taking a brave and quick stand against his former strategic ally. Erdogan has won the admiration and the love of Muslims across the world. When we see the protesters saying that this man is a fascist, it is a description that we not only do not recognise, but find deeply offensive.

7. Because the pious majority will not be oppressed any more

The Turkish protesters may feel themselves to be the underdogs at the present time, but they should not forget that for more than 80 years it was they that held power in Turkey. During these 80 years, the treatment that the pious majority of Turks received can only be described as oppression. Turning mosques into museums, banning adhaans, banning the Fez, closing medressas – the scope of the oppression was wide ranging and all pervasive. To give you just one example – Erdogan’s wife herself could not attend many functions in the early years of his rule simply because she wore a hijab. To give you another, the popular mayor of Istanbul (Erdogan) was jailed for simply reciting an Islamic poem. Where were the howls of protest then? Where was the indignation? In fact, we see the protesters engaged in glimpses of the same behaviour by the way they have vandalised and desecrated Mosques during their protests. The truth is that the majority of Turks are slowly turning back to a more natural and comfortable relationship with their faith and their fellow believers. They will not accept living in a state of fear and intimidation by the kemalists, communists or ‘-ists’ of any kind.

Not everything Erdogan does is good or right. He is a politician and like other politicians, his calculations are not above criticism or censure. If those protesting in Turkey today want to save a few trees in Istanbul, then they will find that many will support them and be sympathetic towards their cause. They may even succeed. If, however, they want to bring down the most successful (by almost any measure) and popular democratically elected government that the Turkish people have had in more than a century, then they will fail. The message from the pious majority of Turks is clear. Your time is over. We are all Erdogan now.

Egypt’s Political Crisis: What You Need to Know About Morsi, the Brotherhood and “Tamarod”