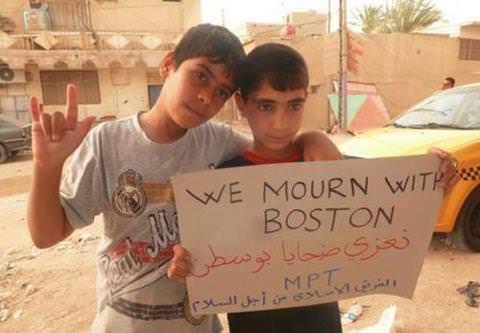 Ever since the Boston marathon bombings, my mind has been swarming with thoughts and emotions.

I have been glued to the internet, digesting article after article, and comment after comment. I am sure I am not alone.

The American Muslim emotional roller-coaster response to terrorism isn’t fresh reading. It starts with deep sadness and horror during the course of the actual murderous events, then swings into anxiety, “hope the terrorists weren’t Muslims”, then finally the anxiety is replaced with fear of the backlash (if it involved Muslims).

But you see, I am quite sick of feeling guilty for someone else’s actions.

Yes, someone ELSE. Not me, nor anyone else I influenced.

Every time someone who shares my faith goes wacko, almost instantaneously all Muslims are forced into the limelight, and compelled to condemn the actions, yet the same standard isn’t applied to non-Muslim terrorists. And the familiar excuses are provided to explain why Muslims bear more responsibility.

So let’s tackle these excuses:

1. Islam motivated the bombers to terror. As they became religious, they became terrorists.

False. By this logic, the most religious Muslims should be the biggest terrorists. However, empirical proof doesn’t support this. How many Imams in USA, who ostensibly would be knee-deep in religious knowledge, have become terrorists? Hardly any! And for this logic to work, a statistically significant percent of Imams should have turned to terrorism, which is not the case.

2. We do know the older brother became religious, right? How can you deny that?

As they say, sometimes little knowledge can become dangerous knowledge. Indeed, in the history of Islam, there were some Muslims (called Khawarij), who were ruthless and killed many of their own. The Prophet

said of them that they would be dogs of hellfire, even though they were Muslims. Very practicing Muslims, yet their knowledge of Islam was limited to rituals and window-dressing. Two points that would shock anti-Muslim bigots: (i) Just because someone is a Muslim doesn’t relegate him or her to a heavenly position in the eyes of other Muslims and (ii) the Prophet

himself distanced Islam from this murderous type of Muslims.

3. So are you saying that religion has nothing to do with it?

No, except in an indirect way. And this has to do with the concept of comradeship that Islam or any other religion, ideology, nationalism inculcates in its members. As Tamerlan Tsarnaev reconnected with his faith and his people (Chechens), it is likely he felt a deep sense of anxiety with how Russia brutalized and terrorized his native Chechnya. Perhaps he knew that he was being watched too closely to do anything in Russia. It seems likely that he extended the comradeship concept to Afghanistan, Burma and all the other regions where Muslims are being routinely oppressed and killed.  We do know that Tamerlan had become quite angry towards American policies in Afghanistan and Iraq. And perhaps his anger boiled over ultimately into the Boston savagery. No one knows exactly what went on in Tamerlan or Dhozakar’s heads, but we do know that statistically there is no correlation between radicalism and piety. In fact, in polling done by Gallup in the Muslim world,

In Indonesia (the largest Muslim majority nation), those who condemned terrorism (the moderates) cited humanitarian AND Islamic reasons for holding their views [such as the verse “Killing one life is as sinful as killing the entire humanity”- Qurʾān 5.32]. And what about the radicals? Not a SINGLE respondent from Indonesia who condoned the 9/11 attacks cited the Qurʾān as justification. Instead, the responses were “markedly secular and worldly” (such as “The US government is too controlling toward other countries”).  [See more in this book synopsis of Who Speaks for Islam by Dalia Mogahed]

4. But Muslims are causing problems all around the world!

This is precisely the reason that many Muslims feel so much anger and distrust towards the West. Because this is like rubbing salt in an open wound. Like it or not, our government has been engaged in some of the worst foreign policy decisions possible. From the disastrous war in Iraq to the frequent drone attacks in Pakistan, from our eerie silence on brutal genocide of Muslims in Burma to the acquiescence to dictators in the Muslim world, it is obvious to any fair-minded that our government is doing more to radicalize Muslims than any online preacher. Unfortunately there are very few Glenn Greenwalds in the media who have consistently preached this very same message.  And that message is clear as the sun on a cloudless day: “Its politics, not piety, stupid!”

5. Not all Muslims are terrorists, but all terrorists are Muslim.

When a non-Muslim carries IEDs into New York just a week before the Boston bombings, and no one has heard about it, then you can understand why I cannot blame people who think like this. The only terrorist events (or plots) that are reported ad nauseam are those involving Muslims. This is just the fact. Otherwise if Muslims had a monopoly on terrorism, how can you explain that 88% of domestic terrorist plots in USA since 1995 did not involve Muslims?

6. So you are saying Muslims couldn’t have helped prevent this?

In fact, Muslims have been at the forefront of preventing terrorist attacks from their ranks, as Sherriff Lee Baca testified at the Pete King’s hearings (witch-hunt) on “radical Islam” that American Muslims have reportedly helped foil seven of the last ten plots propagated by Al-Qaeda within the United States. As recently as last week, an editorial in the Toronto Star gave credit to Muslims for thwarting Toronto plots.

7. So why didn’t Muslims prevent the Boston bombings?

Muslims are not Homeland Security or FBI. We are not authorized or responsible for monitoring other Americans. In this particular case, there is no evidence that the terrorism suspects talked about their intended actions in the mosques. As anyone in law enforcement will tell you that it is virtually impossible to uncover plots by unconnected (to wider networks) individuals. Had these Boston bombing suspects made any reference to terrorism in their mosque, it is unlikely that they wouldn’t have been reported or counseled. An interesting case that speaks to this is of the FBI informant, Craig Monteilh, whose open jihad talk led to him being turned into the FBI by the community members in Orange county, California!

8. What is needed then to prevent radicalism then?

Of course, the root of the problem is political and until the oppression of Muslims stops, until drone attacks stop, until Western led wars in Muslim lands stop, it will be virtually impossible to stop the endless supply of radical material made available to disaffected youth. Of course that seems like a distant dream. Until then, we have to focus on band-aid measures.  As we have talked about on MuslimMatters for a long time, a key source of radicalism is the internet (see these two posts from 2010: MM on CNN and Lure of Radicalism by Yasir Qadhi). Moderate websites need to be propagated and radicals need to be defeated in the battle of hearts and minds with the true merciful message of authentic Islam. The negative energy feeding angry Muslim youth needs to be tempered with non-violent alternatives. And since the radical political message is being fed within shrouds of religion, the counter-message also needs to be religious and “fundamentalist”. In fact, there is no stronger antidote to radicalism than a strong orthodox Islamic approach

In conclusion, the Muslim community has nothing to apologize for.

We are as saddened and traumatized by the terrorist attacks as any other American.

We feel the pain of innocent individuals, men, women and children who have lost their lives or their limbs to the actions of the Boston bombing butchers.

We are further angered that these terrorism suspects had anything to do with Islam, further complicating the already fractured brand-name of Islam and Muslims in Western societies.

We hate the fact that this incident has given fresh oxygen to the anti-Muslim bigots who make their living as parasites on this hatred.  But we are not responsible for the attacks, and we will not apologize for it.

And you, the anti-Muslim bigot, is welcome to sprout and expose your hatred by saying how much you want to nuke all Muslims. But great good that will do.  Your hate will just gnaw inside you and slowly eat you up.

As 1.6 billion Muslims (over 1/5 of all humanity), we are very much bound to each other, whether you are a Christian, Jew, Hindu, Buddhist or atheist. Instead of hating, get to know a Muslim. You will be surprised to know how much we are just like you in our humanity.