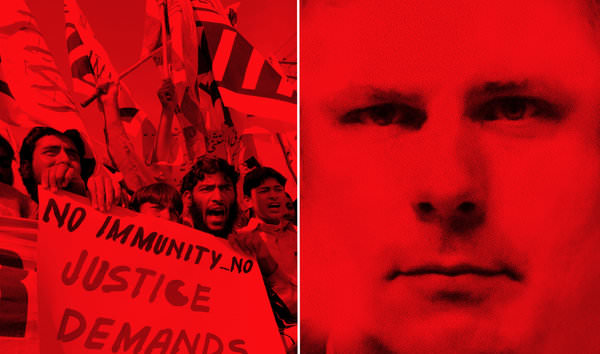 MM’s Amad wrote about this two years ago his post Losing Battle of Hearts and Minds the Case of Raymond Allen Davis.

The burly American was escorted by Pakistani policemen into a crowded interrogation room. Amid a clatter of ringing mobile phones and cross talk among the cops speaking a mishmash of Urdu, Punjabi and English, the investigator tried to decipher the facts of the case. 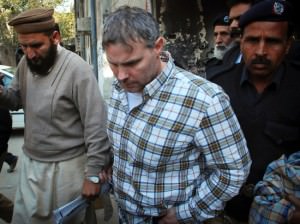 Raymond Davis, who was employed by the C.I.A. as a contractor, was escorted out of court after facing a judge in Lahore, January 28, 2011. Copyright 2013 The New York Times Company

“America, you from America?”

“You’re from America, and you belong to the American Embassy?”

“Yes,” the American voice said loudly above the chatter. “My passport — at the site I showed the police officer. . . . It’s somewhere. It’s lost.”

On the jumpy video footage of the interrogation, he reached beneath his checkered flannel shirt and produced a jumble of identification badges hanging around his neck. “This is an old badge. This is Islamabad.” He showed the badge to the man across the desk and then flipped to a more recent one proving his employment in the American Consulate in Lahore.

“You are working at the consulate general in Lahore?” the policeman asked.

“I, I just work as a consultant there.”

“Consultant?” The man behind the desk paused for a moment and then shot a question in Urdu to another policeman. “And what’s the name?”

“Raymond Davis,” the American confirmed. “Can I sit down?”

“Please do. Give you water?” the officer asked.

“Do you have a bottle? A bottle of water?” Davis asked.

Another officer in the room laughed. “You want water?” he asked. “No money, no water.”

Another policeman walked into the room and asked for an update. “Is he understanding everything? And he just killed two men?”

Hours earlier, Davis had been navigating dense traffic in Lahore, his thick frame wedged into the driver’s seat of a white Honda Civic. A city once ruled by Mughals, Sikhs and the British, Lahore is Pakistan’s cultural and intellectual capital, and for nearly a decade it had been on the fringes of America’s secret war in Pakistan. But the map of Islamic militancy inside Pakistan had been redrawn in recent years, and factions that once had little contact with one another had cemented new alliances in response to the C.I.A.’s drone campaign in the western mountains. Groups that had focused most of their energies dreaming up bloody attacks against India were now aligning themselves closer to Al Qaeda and other organizations with a thirst for global jihad. Some of these groups had deep roots in Lahore, which was why Davis and a C.I.A. team set up operations from a safe house in the city.

But now Davis was sitting in a Lahore police station, having shot two young men who approached his car on a black motorcycle, their guns drawn, at an intersection congested with cars, bicycles and rickshaws. Davis took his semiautomatic Glock pistol and shot through the windshield, shattering the glass and hitting one of the men numerous times. As the other man fled, Davis got out of his car and shot several rounds into his back.

He radioed the American Consulate for help, and within minutes a Toyota Land Cruiser was in sight, careering in the wrong direction down a one-way street. But the S.U.V. struck and killed a young Pakistani motorcyclist and then drove away. An assortment of bizarre paraphernalia was found, including a black mask, approximately 100 bullets and a piece of cloth bearing an American flag. The camera inside Davis’s car contained photos of Pakistani military installations, taken surreptitiously.

More than two years later, the Raymond Davis episode has been largely forgotten in the United States. It was immediately overshadowed by the dramatic raid months later that killed Osama bin Laden — consigned to a footnote in the doleful narrative of America’s relationship with Pakistan. But dozens of interviews conducted over several months, with government officials and intelligence officers in Pakistan and in the United States, tell a different story: that the real unraveling of the relationship was set off by the flurry of bullets Davis unleashed on the afternoon of Jan. 27, 2011, and exacerbated by a series of misguided decisions in the days and weeks that followed. In Pakistan, it is the Davis affair, more than the Bin Laden raid, that is still discussed in the country’s crowded bazaars and corridors of power.

Related Topics:americaanti-americanCIALashkar-e-TaibapakistanRaymond Davis
Up Next