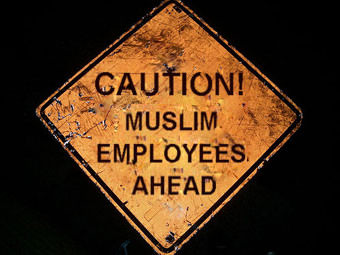 She didn’t know that the $20 scarf she wrapped around her head that morning would result in a $25,000 lawsuit .

She walked into the job interview for Morningside House of Ellicott City: a confident, well educated professional. Excited, about to graduate from nursing school and after spending years caring for other’s children as a childcare worker, she was starting a new chapter of her life. A heartfelt prayer to Allah mumbled under her breath and she opened the door.

The ad for a Nurse’s Assistant (CNA) in the senior assisted living community had been on several job websites.  Her professors recommended the extra experience, so even though she was overqualified she applied for it. She got a same-day interview when she called; a very common practice in the industry.

In any job interview what stressful questions do one prepare for? Usually about one’s degree, achievements or experience but certainly not on the applicant’s choice of headgear.  This is exactly what Khadijah Salim of Baltimore City, MD endured.  “For 15 minutes I was asked over and over again to explain my hijab.” Salim spelled out how she had worked with patients, from the operating room to geriatrics to the psych ward, during her clinical rotations, without any issues.

Morningside will pay $25,000 and furnish other relief to settle a religious discrimination lawsuit filed by the U.S  Equal Employment Opportunity Commission (EEOC) in June 2011, according to the agency.  The EEOC had charged that Morningside House of  Ellicott City denied hire to Salim because she refused to remove her hijab.

The director of health services of this particular facility of Morningside House (a corporation which manages several properties) was the one who conducted the interview. Looking at her up and down, she started her questions based on Khadija’s appearance. Confident in her vibrant fashion sense, that day Khadija had worn pants, a formal shirt and a well-coordinated hijab.

“She said I would scare the patients! I have never scared anyone in my life, do you know how hurtful that is, to think that I would scare someone?” Salim’s voice tightened over the phone. “One of my elderly patients during my rotations thought I was an angel.”

“I showed her how I tied it up around patients, assuring her that it would not be in the way but her demeanor did not change. She even handed my application back to me. We didn’t talk about anything else. She finally just asked me, “Would you be willing to remove it while you are working for the facility?” Said Salim, “as I left she asked me what hours I was willing to work.”

Offended and shocked, Salim says that she couldn’t believe that it was 2010, and in a place with so many Muslims. “I am not  sensitive about hijab, I’ve worn it since I was a little girl and have no problems answering genuine questions about hijab,” stressed Salim.

Although she was told she would be contacted if someone were interested in her, she was never contacted, nor was she one of  ten CNAs who were hired by Morningside in September 2010.

Salim is no stranger to the civil rights movement, as a young African American Muslimah, it had been a family legacy. She was also very familiar with the work done by CAIR (Council on American Islamic Relations) as she grew up down the street from its co-founder, Nihad Awad.

Nationally cases have been filed based on several basis: accommodating prayer times, adjusting work schedules to accommodate Friday prayers, the ‘no pork’ rule and the hijab criteria, etc. Many times the discrimination is subtle quoting customer preferences, companies will relegate visibly Muslim workers to jobs that are lower paid jobs or ‘low- visibility’ jobs.

In California, two similar cases to Salim’s made headlines; the Abercrombie & Fitch cases and the Disneyland lawsuit.

Hani Khan from San Mateo, CA, a 20-year-old college student, is one of three women suing Abercrombie & Fitch for either not hiring, or firing, women wearing headscarves. Samantha Elauf, a 19-year-old student from Oklahoma, filed suit in 2009, and an unnamed 18-year-old woman from Milpitas, CA  sued them in 2010.

Imane Boudlal is suing Walt Disney Co. in federal court, saying that she was discriminated against and harassed for her religious beliefs. She also alleges that she unfairly lost her job in 2010 after refusing to remove her hijab at work.

According to the New York Times, although Muslims make up less than 2 percent of the United States population, they accounted for about one-quarter of the 3,386 religious discrimination claims filed with the E.E.O.C. last year.

Locally, 6.8 % of the total US charges for religious discrimination filed by the EEOC has been from the DMV area.

From 2001 to 2008, religious discrimination cases  filed with the EEOC have seen a 35 percent increase.   According to experts, like Sahar Aziz, Esq., even these numbers are low as many Arabs and South Asians of Islamic heritage refuse to report discrimination because they fear losing jobs in these tough economic times.

“The trend could reflect a rise in Islamophobia in the workplace or an increased willingness on the part of Muslims to report discrimination — or both,” stated one observer.

“In this [Salim’s] case, there was no undue  hardship to the employer — just an apparent overreaction to a reasonable request because of myths and stereotypes about a religion,” EEOC Regional Attorney Debra M. Lawrence said in the EEOC statement. The EEOC files cases for only 5 percent of the it receives.

“I have been on enough job interviews to know what’s up. Initially, I was not even looking for monetary compensation, I was just asking for an apology and that is why I contacted CAIR. If they don’t even acknowledge their mistake, how are they going to rectify it?” asked Khadijah.

Khadijah was eventually hired by another hospital as an RN.

Under Title  VII of the Civil Rights Act of 1964, employers have an obligation to  accommodate an employee’s or applicant’s sincerely held religious beliefs unless it creates an undue hardship.  In the Salim case, the  EEOC filed suit after first attempting to reach a pre-litigation settlement  through its conciliation process.

Title VII is a federal law that prohibits employers and other covered entities from discriminating against an employee or job applicant because of the person’s race, color, religion, sex or national origin. The Pregnancy Discrimination Act is incorporated into Title VII. Title VII also protects against retaliation and requires employers to make reasonable accommodations for religion.

On their website, Morningside says that that all Morningside managed properties are Equal Opportunity Employers. Efforts to reach Morningside to discuss the implementation of their religious discrimination training were not responded to.

This summer, a Metro employee sued the agency over practices that limited her ability to take off Fridays to attend Jumuah salah. Najmah Rashad is a secretary in the agency’s legal office. Her lawsuit, filed in the District of Columbia, is seeking $400,000.  She had offered to work late and come in early on other weekdays in exchange for taking time off on Fridays.

In February 2009, Metro settled a complaint by the U.S. Justice Department that said the transit agency discriminated against at least three women. A Pentecostal Christian woman was not allowed to wear a skirt in accordance to her faith, she was training to become a bus driver. Two Muslim employees were not allowed to wear hijab on the job. Metro agreed to pay all three women, provide religious sensitivity training for all supervisors and managers, plus create a policy accommodating religious practices.

“If you spend most of your interview talking about how you look or your appearance, then you might want to think, is this a fair and just interview?” said Salim. “I recommend the EEOC, they are a very fair organization.”

It is generally illegal for a covered employer to fail or refuse to hire, to fire, or to otherwise discriminate against an applicant or employee with respect to compensation, terms, conditions, or privileges of employment, because of such person’s race, sex, religion, color, national origin, or other protected category. Unless the company can establish “undue hardship,” it is also unlawful for a covered entity to fail to provide a “reasonable accommodation” to an employee or applicant’s religion or disability. It is also illegal to retaliate against someone for exercising rights under employment discrimination laws.

Cases like these take an emotional toll on the victims, as the legal process is long and involvs many meetings and negotiations and can also put the victim in the media spotlight. “It was nerve wrecking. They called me a liar and denied everything,” she stated. “I had whole blog posts on me. It was so hurtful, I just stopped Googling my name.”

Khan, the Muslimah in the Abercrombie & Fitch case, said she received death threats after her story went public.

A look inside the blogosphere finds a common complaint that Muslims as well as followers of other faiths are asking for special privileges.  The most resonating response to this accusation is that Christians need to check their privileges, as even though there is separation of church and state in the U.S., the holidays and celebrations are structured around Christian dates. More so as the dominant faith they can practice their beliefs without the fear of be mocked, inhibited or denied opportunities, especially opportunities that they are well qualified for.

Salim felt that people may judge her as a fraud or a troublemaker after this case. “My biggest support was my family and [reminding] myself of what the Sahaba (Companions of the Prophet) went through.” said Salim.

“I had to stand up. How am I going to raise two Muslim daughters to wear the hijab without fear, if I don’t do this?”

written for the The Muslim Link newspaper

We Are All Slaves of Allah