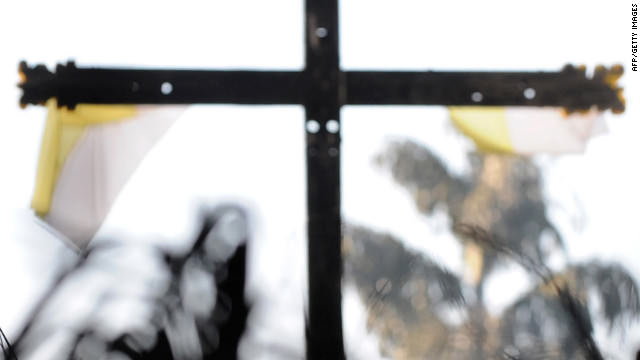 Editor’s Note: Brian D. McLaren is author of “Why Did Jesus, Moses, the Buddha, and Mohammed Cross the Road? Christian Identity in a Multi-Faith World” (Jericho Books/Hachette Book Group).

By Brian McLaren, Special to CNN

At a time when U.S. embassies are being attacked and when people are getting killed over an offensive, adolescent and puerile film targeting Islam – beyond pathetic in its tawdriness – we must begin to own up to the reality of evangelical Islamophobia.

Many of my own relatives receive and forward pious-sounding and alarm-bell-ringing e-mails that trumpet (IN LOTS OF CAPITAL LETTERS WITH EXCLAMATION POINTS!) the evils of Islam, that call their fellow evangelicals and charismatics to prayer and “spiritual warfare” against those alleged evils, and that often – truth be told – contain lots of downright lies.

For example, one recent e-mail claimed “Egyptian Christians in Grave Danger as Muslim Brotherhood Crucifies Opponents.” Of course, that claim has been thoroughly debunked, but the sender’s website still (as of Friday) claims that the Muslim Brotherhood has “crucified those opposing” Egyptian President Mohamed Morsy “naked on trees in front of the presidential palace while abusing others.”

CNN’s Belief Blog: The faith angles behind the biggest stories

Many sincere and good-hearted evangelicals have never yet had a real Muslim friend, and now they probably never will because their minds have been so prejudiced by Islamophobic broadcasts on so-called Christian television and radio.

Janet Parshall, for example, a popular talk show host on the Moody Radio Network, frequently hosts Walid Shoebat, a Muslim-evangelical convert whose anti-Muslim claims, along with claims about his own biography, are frequently questioned. John Hagee, a popular televangelist, also hosts Shoebat as an expert on Islam, as does the 700 Club.

Many Christian bookstores that (used to) sell my books, still sell books such as Paul Sperry’s “Infiltration: How Muslim Spies and Subversives Have Penetrated Washington” (Thomas Nelson, 2008). In so doing, they fuel conspiracy theories such as the ones U.S. Rep. Michele Bachmann, R-Minnesota, promoted earlier this year.

In recent days, we’ve seen how irresponsible Muslim media outlets used the tawdry 13-minute video created by a tiny handful of fringe Christian extremists to create a disgusting caricature of all Christians – and all Americans – in Muslim minds. But too few Americans realize how frequently American Christian media personalities in the U.S. similarly prejudice their hearers’ minds with mirror-image stereotypes of Muslims.

Meanwhile, many who are pastors and leaders in evangelicalism hide their heads in the current issue of Christianity Today or World Magazine, acting as if the kinds of people who host Islamophobic sentiments swim in a tiny sidestream, not in the mainstream, of our common heritage. I wish that were true.

The events of this past week, if we let them, could mark a turning point – a hitting bottom, if you will – in the complicity of evangelicalism in Islamophobia. If enough evangelicals watch or try to watch the film trailer that has sparked such outrage in the Middle East, they may move beyond the tipping point.

I tried to watch it, but I couldn’t make it halfway to the 13-minute mark. Everything about it was tawdry, pathetic, even pornographic. All but the most fundamentalist believers from my evangelical Christian tribe who watch that video will be appalled and ashamed to be associated with it.

It is hate speech. It is no different from the anti-Semitic garbage that has been all too common in Western Christian history. It is sub-Christian – beneath the dignity of anyone with a functioning moral compass.

Islamophobic evangelical Christians – and the neo-conservative Catholics and even some Jewish folks who are their unlikely political bedfellows of late – must choose.

Will they press on in their current path, letting Islamophobia spread even further amongst them? Or will they stop, rethink and seek to a more charitable approach to our Muslim neighbors? Will they realize that evangelical religious identity is under assault, not by Shariah law, not by the liberal media, not by secular humanism from the outside, but by forces within the evangelical community that infect that religious identity with hostility?

If I could get one message through to my evangelical friends, it would be this: The greatest threat to evangelicalism is evangelicals who tolerate hate and who promote hate camouflaged as piety.

The broad highway of us-them thinking and the offense-outrage-revenge reaction cycle leads to self-destruction. There is a better way, the way of Christ who, when reviled, did not revile in return, who when insulted, did not insult in return, and who taught his followers to love even those who define themselves as enemies.

Yes, “they” – the tiny minority of Muslims who turn piety into violence – have big problems of their own. But the way of Christ requires all who claim to be Christians to examine our own eyes for planks before trying to perform first aid on the eyes of others. We must admit that we have our own tiny minority whose message and methods we have not firmly, unitedly and publicly repudiated and rejected.

To choose the way of Christ is not appeasement. It is not being a “sympathizer.”

The way of Christ is a gentle strength that transcends the vicious cycles of offense-outrage-revenge.

The opinions expressed in this commentary are solely those of Brian D. McLaren.

Who’s up for a Game of Angry Muslims?