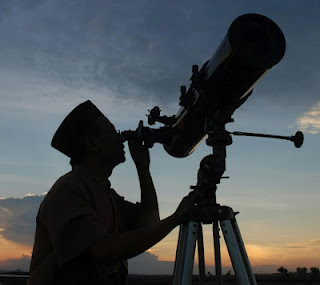 Over the course of the last 1400 years, Muslims have developed various traditions for the month of Ramaḍān. With the march of technology, some of these traditions are at risk of going extinct without us even realizing it. Here are just a few:

said, “The muezzin will receive forgiveness to the extent the voice of his adhān reaches; every living and non-living thing that hears his voice will supplicate for his forgiveness.” [Musnad Ahmed]

Now, having just read that ḥadīth, the logical thing to do is to make sure that you’re the one giving the adhān at every single opportunity. I mean, who wants to miss out on the chance of even inanimate objects asking for your forgiveness simply because they were within earshot of your adhān? But despite the sweet rewards, Muslims seem to be delegating this aspect of our faith to alarm clocks, TV stations and even smartphone apps.

Here in the UK, many Muslim families sit down to ifṭār with the radio or TV set to a Muslim station and await the adhān. As time goes on, the only live adhān many of us (and our children) end up hearing is the one given at Friday prayers and many times that is only if we manage to get to the mosque on time.

Hard as it is to believe, alarm clocks are a relatively new invention. For centuries before they came along, Muslims have been woken up for suḥūr by pious beggars who march through the street banging on drums or something of the like. Where I’m from, they would go through the narrow alleys proclaiming “Suḥūr, Suḥūr. May Allah forgive you.” It’s almost as if they knew that the initial reaction (of some) was to mutter a few less than-holy responses, therefore they threw in the forgiveness part.

The Muslims would wake up and have their suḥūr and offer some to the beggar if they were able to. At the end of the month, each family may give some money to these beggars who were providing a social service as well as earning their daily bread.

Also, the pious beggar would wake everyone up – even those who weren’t planning on waking up for suḥūr or fasting. There was an element of social and peer pressure – a nightly reminder to do good and do it on time. Today, we prefer to have the annoying beep of a digital clock and a snooze button that we can hit repeatedly. 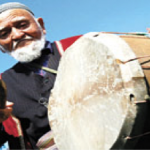 Ummmm – where’s the snooze button on this guy?
[Photo from Todays Zaman website]

Without a doubt, the Ramaḍān tradition most at threat of extinction is the actual sighting of the moon. When was the last time you went out of your home and tried to physically see the moon for yourself rather than trawling through your twitter feed to see whether #Eid was trending? 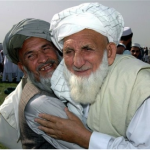 Mabrook! The #Eid hashtag has been sighted on Twitter!
[Photo Mohammad Zubair AP]

himself would look for the new moon and supplicate when he sighted it. It was an honour for any Muslim to sight the moon and even to this day, in a couple of Muslim countries, the first person to physically sight the new moon and officially verify it is given new robes and a small gift. This can only be confirmed if the person is a known trustworthy Muslim who is well known to his local Imam as someone who attends prayers. Also, the person has to have good eyesight – as was hilariously demonstrated by the occasion when an elderly bedouin turned up to Caliph Umar

claiming to have sighted the moon, only for the Caliph to realise that the “moon” in question was actually an overgrown eyelash in the Bedouins field of vision.

Today, we scan TV channels, wait for text messages, and trawl through Internet sites and Facebook status updates. From the comfort of our home, we debate whether or not the moon has actually been sighted without once taking the opportunity to go out and look for ourselves. We even miss out on the chance to organise a field trip with our children and other young Muslims to scan the horizon with telescopes and learn more about our faith. It was our love of looking at the heavens, of finding the age of the moon and the direction of Makkah that propelled us to become masters of astronomy. Today, we neglect these duties and others race to land on it, circle it and study it. 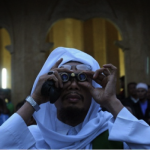 This Ramaḍān, think about relying on technology a little less and your senses a little more. Islam isn’t against technological innovation, but they are supposed to aid the human experience – not replace it.