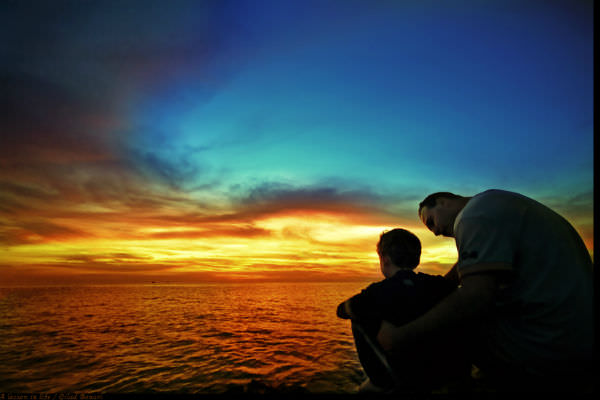 As-Salamu Alaykum,
There is an old saying that goes “It takes a village to raise a child”. To me, that statement emphasizes the tremendous impact that a child’s environment and peers has on his or her development. In a hadith narrated by Imam Muslim, the Prophet

mentioned that sheep shepherds are meek and humble, whereas the caretakers of camels are proud and arrogant, indicating that these human beings are influenced by the innate character of the animals that they take care of. In commenting on this hadeeth, the Ulama have long mentioned that if people are susceptible to being influenced by the character of animals, then how much more susceptible must they be to being influenced by other people and cultures? Now, please take time to think about this in relation to the situation with Muslim families today. Take a quick scan of mainstream culture; check out what is playing on TV or in the cinema, what are the popular stories on the internet, see what your average co-worker or potential classmate for your child is talking about. While there are positive nuggets to be found, the overwhelming majority of what is buzzing and rumbling in the cloud of mainstream culture is petty, selfish, and indulgent, and “Muslim” cultures are not exempt from this. This is our new, global village. Our children deserve better. And the only person that can provide them what they deserve is you, Allah willing.

“Each of you is a shepherd and each of you shall be asked about his flock” – [Bukhari and Muslim], is what the Prophet

told us. Was there ever a time in history where this hadeeth has been more pertinent to a Muslim parent? Has there ever been a time where adultery, disrespect for parents, heedlessness of the Creator, rudeness, and intoxication, which are sins condemned by all the world’s major faiths, are not just accepted, but actually advertised to children? I dearly wish that I was exaggerating, that I was some turbaned version of Glenn Beck, but take one long, eye-searing look at the popular media that is targeted at youth, such as MTV and hip-hop, and you might get upset with me for understating the problem.  And as I often have to point out, the Muslim community is not mystically protected. Just because our children are named Aisha and Muhammad, or because someone’s great grandfather was a hafiz of the Qurʾān, does not bestow a quasi-magical barrier of protection from society’s ills. Through research and personal accounts, I can guarantee you that our children fall prey to the same immorality that the children of all other communities suffer from. Permit me to lift the veil for just one moment: amongst Muslim youth, I know stories of zina, alcohol and drug use (including kids in Hifz school), apostasy, and even incest.  We are not immune! These children needed a protector. They needed a true Muslim Father.

Let me address the inevitable question: Why am I talking about Muslim Fathers and not Muslim Mothers? The simple answer is that the level of involvement of Muslim Mothers in the upbringing of our Ummah’s children is relatively high; look at Muslim parenting websites, masjid activities geared towards children, etc., and you will find that the majority of participants are mothers. Or even better, speak with the youth of your local community and ask them about their relationship with their parents. When it comes to their mothers, many may even complain that their mothers are too involved, “nosy”, or “smothering”. Ask them about their fathers and you will often get blank expressions, and vague, shy answers that they don’t spend much time together. Our sisters were not meant to bear this tremendous responsibility alone. Children need the unique dynamics that a father and a mother bring to a family. Allah has created everything with an inherent nature and purpose, as indicated by the Prophet’s

statement, “People are minerals like the minerals of gold and silver, the best of them before Islam are the best of them in Islam when they obtain knowledge and understanding.” – [Bukhari and Muslim].  There is a specific role that men are supposed to play in the family, modern gender politics be damned. Failing to live up to that role is failure to be a man. Our Creator said, “men are the caretakers (Qawwamoon) of women” [An-Nisaa’, 34]. I understand that this verse has often been used as a bludgeon to enforce female subservience to their husbands, but that is the result of a backwards and impotent culture, and has nothing to do with our Creator’s intent in revealing this verse. As always, our salvation comes from the Sunnah of the Messenger

. In dealing with his wives and children, the Prophet

demonstrated kindness, consideration, compassion, and patience that would put any modern relationship guru to shame. And he sealed the issue by saying, “The best of you is the one who is best to his family, and I am the best amongst you to my family” – [At-Tirmidhi, declared Saheeh by Al-Albaani], emphasizing that his implementation of Qawwamah is the only authentic one, and it is not open to a new American, Arab, Pakistani, or other interpretation. To reiterate: failure to be strong, kind, and caring to your family is failure to be a true man and Believer.

There has never been a time when families have been more in need of this strong, caring figure. We live in an age where we can take nothing for granted. Can you wholly entrust your child’s education to the public school system, especially in such an evolving and dynamic world? Thousands of  educators and experts have written about the inherent flaws of our school system and those flaws are present in any school that models itself after that system (i.e. Islamic schools). Is the food in our supermarkets safe? Again, the testimony of countless experts highlights significant dangers in the way our food is produced. What about your child’s physical development? Hours and hours of play every day were once typical for a child, but current cultural trends are more likely to steer your child towards hours in front of the TV or computer. And what about their spiritual life? Is it enough to send them to Qurʾān class on Saturday and Sunday? Would memorizing and reciting lines from Grey’s Anatomy be enough to make them competent physicians? What about the immorality promoted by modern media channels that I discussed earlier? The list goes on and on, the challenges are relentless, and Muslim families will be overwhelmed, unless they can come together, cooperate, and help each other in the path to their Creator. This endeavor, like all great endeavors, needs a leader. That leader is supposed to be the Muslim Father.

Babies in the Masjid

I was an 18 year old beliigerent atheist when the Quran entered my life and rocked my world. Reading the Seerah later sealed the deal. I studied Arabic everywhere I could, from America to the Levant and somehow an invitation to study with Muhammad Ibn Salih Al Uthaymeen landed in my lap, may Allah have mercy on his soul. I went, I met, I sat, I studied, and words simply can't do justice to the privilege and the experience. I am still trying to figure out how to be thankful for it. I live in the States, I work in IT, and I have two boys who I am trying to help to grow into admirable men.