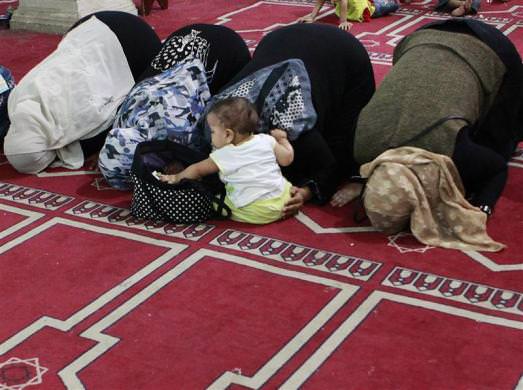 The khuṭbah had already started. She knew that she was late, but she wanted to attend the Jumu‘ah prayer anyway. She quickly picked up her baby and stepped anxiously into the masjid, looking to the left and the right. After all, this was the first time she was here; she had just moved to the area and didn’t know anybody. As she sat down in the Sister’s Prayer Hall with the baby in her lap while her heart was thumping in her chest. She could feel curious eyes turn in her direction, but she stared hard at the ground, too nervous to meet their gaze and tried to concentrate on what the Imam was saying.

But her baby was nervous too. He didn’t know this new place…all these new faces and all the curious eyes. He had never been in a masjid before. He wanted to go home. She knew her baby would be uncomfortable in the new setting, but she thought she could manage. She herself had not been very ‘practicing’ all her life, but now that she was a mother herself, she felt the importance of an Islamic upbringing. She was determined to teach her baby all about this religion right from the very beginning, but first she had to work on herself. She wanted to learn, she decided that the best place to start learning about Islam would be the masjid and this was her first visit to a masjid.

But the baby was getting restless and she could see that he had already started to whimper. Yet, she hoped she could console him long enough to last through the Prayer. However, much to her dismay, just as the Imam finished the khutbah and said, “Allaahu Akbar,” her baby started crying. At first it was low wail and a whine, but then he let it all out. And she was certainly not prepared for the ear-splitting howl that followed, or the hysterically loud sobbing that accompanied it. WAAWWW!!! 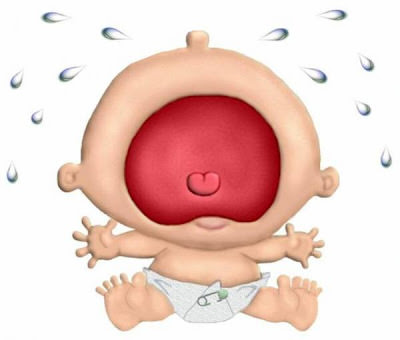 Oh my GOD! What a terrible noise he was making! What should I do?

She thought to herself, panicking. She didn’t want to break her prayer. She tried to pick him up, but he was squirming too much. She realized that he was wailing loudly, but there was nothing much she could really do. “After all, he was a baby!” she said to herself. “I am sure they all understand.”

She wished that the prayer would be over quickly so that she could console her baby. But before the Imam had hardly finished saying the ‘Salaam’, that they all jumped on her!

“WHY DON’T YOU KEEP THE BABY QUIET!”, they screamed! “DON’T YOU SEE WE ARE PRAYING?”

“Why did you come to the masjid?” Someone muttered, grinding her teeth.

“Stay Home, Next Time!” Another one hissed.

With her head bent low, her eyes downcast, she blinked hard to fight back the tears that suddenly welled up in her eye as she tried so hard to swallow the huge lump in her throat. She thought this was the masjid. This was the place where she and her baby would be welcomed; this was the place she wanted to be, to learn Islam and to teach it to her child.

How can they be so mean to her like that? Didn’t they realize that it wasn’t her fault that the baby started crying!

Without saying a single word more, she hurriedly gathered her things, picked up her baby and quickly left the masjid, without even looking back once.

Now let’s go back to another scenario, 1400 years ago, in a better time, in a better place, in another masjid…by relating to this hadith:

This illustrates for us the perfect example of how our behavior should have been. It shows us an unwavering principle of Islam, that is, if in our social life, when any unpleasant incident takes place, we should keep our cool and show tolerance and patience. We should concentrate on finding a solution to the problem and not just think in terms of what punishment to hand out to the problem-maker. We should find means that would alleviate rather than aggravate the problem.

Where is our sense of tolerance and patience? Where is our feeling of compassion and mercy? When and where will we show it, if not in the masjid, of all the places? The Prophet (saw) said:

“He, who does not show mercy to others, will not be shown mercy.” [Bukhaari]

Did the sisters forget the time when they had little babies of their own and they cried too?

The Prophet (saw) understood the agony that a mother goes through at such times. That’s why he (saw) said:

“When I enter the prayer I intend to prolong it. Then I hear the crying of a child, so I shorten it knowing the difficulty his mother will have with him crying.” [Bukhaari]

And aren’t we supposed to warmly receive a newcomer, and make them feel wanted and welcomed…especially one who is just coming back to Islam? Isn’t being kind and tolerable, the very basis of our deen…the very essence of our Da’wah?

As Allāh says to the Prophet (saw):

“By the grace of Allāh, you are gentle towards the people; if you had been stern and ill-tempered, they would have dispersed from round about you” [159 Al-‘Imraan]

Aren’t we supposed to behave courteously towards one another? Didn’t the Prophet (saw) tell us:

“He is a bad person in the sight of Allāh who does not behave courteously and people shun his company because of his bad manners.” [Bukhaari]

Was this the way to behave with the new sister?

Why weren’t we gentle and merciful to her?

Why couldn’t we be patient with her and her little baby?

Couldn’t we have dealt with the situation better?

Were we a means of pushing her away from coming to the masjid?

These are some of the questions that we seriously need to ask ourselves.

Muslim Fathers Have to Man Up