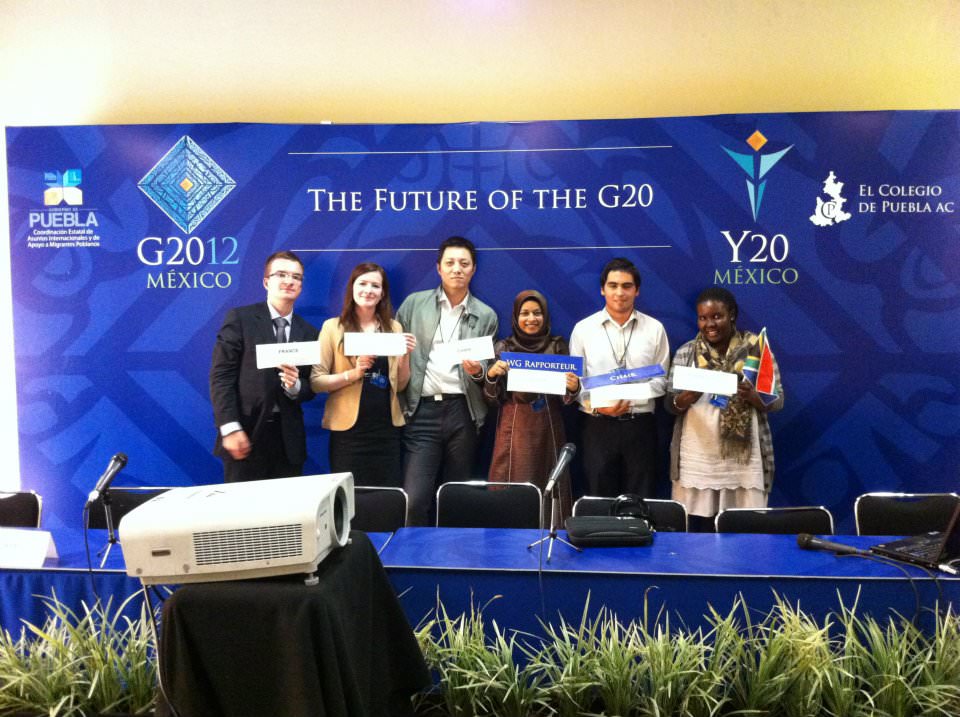 After telling several male youth and men “I’m sorry I don’t hug” or please don’t brush against my cheek (Arab kiss style) I realized that my time at the Y20 as a Hijaby (scarf-wearing-Muslim) was going to be interesting to say the least.

Yes, I can confidently say I feel like I met the world in four days: about 200 youth leaders from 25 different countries across the globe. It was a great honor to represent my country, I love Canada and our promise of a multicultural mosaic was evident in every fiber of our team.

For me, in the end I like to bring things back to reflect a spiritual meaning behind each journey. I quickly realized that in Latin America and a few specific European countries people are very touchy-feely. It was natural for men to lean in for a hug or to hold on to a strange waist when coming together for a picture or come in for a side kiss in cases where one is parting. I also realized how embarrassing this might be for both parties when I take that awkward step back and say “I’m sorry but I don’t do that. I am Muslim and we just don’t do that”. At one instance I thought I almost made a grown man cry, at which point I had to explain myself further… “It’s not you. It’s me” (sounds a bit like a break up).

However, it was this instance that made me realize that it is me. Or I should say it is the fault of the Muslim community in general. One in five persons is a Muslim and yet the world has no idea who we really are. Why you ask, well we just aren’t there.

I know that the youth I met last week are the world leaders of tomorrow. There was no doubt that the youth coming out of that Y20 summit will be “somebody’s” some day. Yet for a lot of these youth they were meeting a Hijaby or a Jilbaby for the very first time. Most males had no idea the interaction etiquette with a girl that wears the head scarf, let alone what we think. I was asked questions ranging from “did your dad make you wear that?” to “how do you people get married if you can’t even hug the guy beforehand?”.

Some of you might say that one should never go to places or put themselves in a situation that can become awkward or inappropriate for a hijaby. But for me it is those awkward moments that show the greatest need for my presence. Hijaby’s cannot just run away from leadership positions or places that might put us in uncomfortable situations: we must face them with dignity and assert our identity. If as Muslims we don’t, then we might as well not exist because global decisions right down to the regional will never reflect our perspective.

After a long conversation with a delegate from somewhere in Europe (I would like to leave the country unnamed) explaining why I wear the Hijab and why I believe I feel it frees me, the importance of this conversation hit me. With political aspirations in mind, this well intentioned youth who had many misunderstandings of the position of women in Islam could have become an advocator of many misconstrued ideas that would attempt to “liberate” women that look like me. Clearly there is a great communication gap.

“I am sorry please don’t hug me” was only a small part of my experience. As one of two Hijaby’s and the only Jilbaby at the Y20 Summit I quickly became a specimen of fascination. Latin America has very little exposure to Muslims and Islamic culture, I quickly became a favorite for the guards who wanted to take pictures with me. I would have the most random people ask for a “Foto?” and with no ability to speak Spanish I would nod, smile and pose. I believe it took a mere two hours for the whole conference to know that I was from Canada, people would express their surprise as they confirmed the information to be true. I love playing up the shock factor, my perfect English and position as Rapporteur for my working group were proof that I was highly capable.

It is also important to mention that every person I met was simply wonderful. I did not feel weird or left out wearing the Hijab. Delegates from all countries were gracious, kind, welcoming and open. All the men that I told not to hug me were understanding and more than polite. As some of us are told that ‘wearing hijab will hamper your success’, to that I say ‘bi’iznillah Allah will never let us down’.

If some of you are still wondering what the Y20 is, let me first explain it in terms of the G20.The Group of Twenty, or G20, is the premier forum for international cooperation on the most important aspects of the international economic and financial agenda. Recently it has expanded to include more topics affected by the global economic system such as green growth and food security.  It brings together the world’s major advanced and emerging economies. The Y20 then, brings together youth leaders from the G20 countries to discuss the same issues and produce a document that will be taken into consideration by the G20 leaders as the global youth voice.

Leenat Jilani is going into her fourth year of University majoring in Political Science, Social Justice and Peace Studies at a Western University in Canada – Brescia University College. As a young leader, Leenat has represented Canada on an international trade and development mission to Indonesia, Malaysia, Singapore and now the Y20 Summit. Leenat would like to thank Al-Maghrib Institute for supporting her trips and promoting female leadership.

An “Icon” Became a Student: How I Joined MuslimMatters