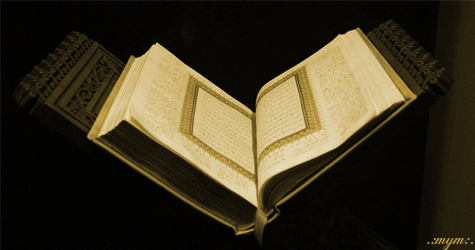 We are living in an era of information explosion in which data, news and knowledge of all kinds stream into our lives 24/7 via multiple media inlets, so much so that now it has become a challenge to pick and choose that input which we want to receive; which we deem relevant. Pregnancy, childbirth, infant care and parenting topics are no exception.

From detailed pregnancy books to 3D-animated videos; subscriptions that facilitate personalized, week-by-week email pregnancy updates, to extensive online obstetric resources and pediatric websites, an expectant mother nowadays is amply aware of every change that is going on inside her body, as it happens or even beforehand.

The Quran revealed the process of the creation of man long before science gave every part of his anatomy, down to the inner contents of his individual cells, a unique name and pictorial description.

In fact, in the Quran, Allah described the chronological phases of fetal growth and development 14 centuries ago, long before any ultrasound machine existed:

“It is He Who has created you from dust then from a sperm-drop, then from a leech-like clot; then does he get you out (into the light) as a child: then lets you (grow and) reach your age of full strength; then lets you become old,- though of you there are some who die before;- and lets you reach a term appointed; in order that you may learn wisdom.” [40:67]

According to Tafsir Ibn Kathir, this reference to man’s creation from “تُرَابٍ”, or dust, implies the origin of mankind viz. the creation of the first human being, Prophet Adam [عليه السلام], from dust: “[“And Allah did create you from dust, then from Nutfah”], means, He initiated the creation of your father Adam from dust, then He created his offspring from semen of worthless water.”

Modern science has, by now, explained the entire process of the creation of a human being, down to those minute, microscopic intricacies that were invisible to the human eye centuries ago.

Many times in the Quran, Allah draws our attention to the way we were created. It is interesting to remember though, that at the time when these verses were revealed, human beings had limited knowledge about the process of human birth, unlike now.

Why would Allah then invite us to ponder on the origin of our creation? The contexts in which He mentions our origins lead to some interesting observations. But first, lets analyze the word most oft-repeated in the Quran when Allah mentions man’s creation:

The dictionary meaning of the word “nutfah” is – “Drop of fluid; semen“.

Man is a disputer

Allah says in the Quran:

“He (Allah) has created man from a sperm-drop; and behold this same (man) becomes an open disputer!” [16:4]

The word خَصِيمٌ is derived from خَصمَ which means “he contended with in an altercation“, and the word الخِصَام means “the statements that a listener is made to hear, which may cause him to desist or refrain from his assertion, plea or claim“.

In another place in the Quran, Allah says about man: “وَهُوَ أَلَدُّ الْخِصَامِ” – “And he is the most rigid of opponents” [2:204], where this word الخِصَام is used again to describe man.

Question is, why does Allah mention the origin of man (the nutfah) along with the fact that man is an open disputer?

Man disputes about Allah; about religion; about being right. Sometimes, man goes on arguing even if he possesses little knowledge of what he is arguing about, just to prove himself to be right, or to be better, than his “opponent”.

This type of arguing and disputing is, usually, less about establishing the haqq and abolishing falsehood, and more about one-upping the adversary to come out looking better, or on the right path, as the definition of the word الخِصَام implies; also, to attempt to make the adversary clam up and desist from putting forth their claims or opinions.

Allah mentions how man was created from nothing but a microscopic sperm, which is not even visible, and yet he grows into a creature who argues about the very being that created Him from this miniscule little drop of fluid – he disputes about Allah, His attributes, or any other aspect of Islam, to avoid submitting to Him – the Creator who not just created him, but also gave him provision since day one to make him grow, acquire a physical form, then be blessed with sight, hearing, and intellect:

“Verily We created Man from a drop of mingled sperm, in order to try him. So We gave him Hearing and Sight.” [76:2]

Man falls into disbelief and ingratitude

Another context in which Allah mentions the origin of man as being from the nutfah, is the fact that man falls into kufr, i.e. when he grows up, he starts to deny Allah’s blessings, or to belie His Prophets and their monotheistic message, or reject Allah’s commands, refusing obstinately to obey them. Kufr also constitutes the denial of the establishment of the Hour (الساعة).

In Surah Al-Kahf, a man who owned 2 luscious gardens was conversing with his pious companion and bragging about possessing more wealth and a larger family than him. He went on to say that “I do not think that this (wealth) will perish – ever. And I do not think the Hour will occur. And even if I should be brought back to my Lord, I will surely find better than this as a return.” [18:34-36]

His pious companion, who was a believer, responds by making him recall how Allah created him, saying:

“His companion said to him, in the course of the argument with him: “Do you deny Him Who created you out of dust, then out of a sperm-drop, then fashioned you into a man?”” [18:37]

In this context, Allah warns us through these verses of the Quran, not to fall into the same trap – that if we have been blessed with abundant wealth and a large family, we should not be fooled by this superfluous worldly benefits into denying the absolute reality of the imminence of the Hour (الساعة).

Heedlessness about the Akhirah makes one slowly slip down the slope of adherence to the commands of Deen, and disbelief starts to creep into our hearts like rust, chipping away our faith in Allah and in the Akhirah.

One of the ways suggested, in the above verse of the Quran, to keep ourselves humble before Allah and firmly grounded in the correct belief (aqeedah), is to remember our origin – our creation. How, once, we were nothing more than a tiny embryo, a single ovum fertilized by a single sperm (مِن نُّطْفَةٍ), from which Allah fashioned us into a complete, symmetrical, fair-looking human being (سَوَّاكَ) in our mothers’ wombs, having a body that contains innumerable anatomical systems (respiratory, nervous, digestive, cardio-, reproductive etc.) functioning together in perfect unison:

“From a sperm-drop He had created him, and then moulds him in due proportions;” [80:19]

The “miracle” of our creation enables us to recognize and remain in total awe of Allah’s limitless powers. That in turn allows us to submit to Him and to His message conveyed to us through His Prophets.

For surely, the Magnificent Creator who fashioned a complete living being out of a mere sperm drop, can resurrect that same human being hundreds of years after his death; after his total decomposition into nothingness.

Because for the One for whom the first, original creation was so easy, the resurrection will be even easier:

“…Even as We produced the first creation, so shall We produce a new one; a promise We have undertaken. Truly shall We fulfil it.” [21:104]

Another context in which Allah mentions the creation of man, is how he originates from a “lowly” water viz. human semen. Whilst the first human being was created and fashioned from dust, his progeny continued on earth via this water:

The place in the human anatomy from where this “despicable” water originates is also mentioned by Allah:

“Now let man but think from what he is created. He is created from a drop emitted. Proceeding from between the backbone and the ribs.” [86:5-7]

Allah then goes on to exhort how, if He could create a human progeny from such a water that gushes forth from man’s own body, He is utterly and completely able to recreate man in the Akhirah, after his death and decomposition in this world/dunya:

Allah mentions 3 other words in another place in the Quran where He mentions the “despicable” water – “طِين”,”نسل” and “سلالة”:

“Who made all things good which He created, and He began the creation of man from clay; And made his progeny from a quintessence of the nature of a fluid despised.” [32:7-8]

The point that comes across is how Allah brought every one of us into this world from a mere drop of fluid – a fluid that is considered dirty, lowly and worthy of being washed off and discarded; which emanates from a part of the body that is also kept hidden and considered shameful; a part that excretes the filth (urine) from our bodies.

Furthermore, when a human baby comes into this world, it again does so through the same anatomical part of his mother’s body.

Allah reminds man again and again of his lowly and inferior origins, of his first and subsequent creation, in order to cull his arrogance and reinforce his belief in Allah’s absolute power of creation and resurrection.

Because as long as we keep reminding ourselves of how we were created, how we were born, and how we came into existence from nothing, to ultimately grow bigger and take the shape of a functioning human being from the merger of two tiny cells, we will perhaps be able to stop doubting how Allah will put us back together in the Akhirah when the Hour is established.

Yasir Qadhi | Khutbah: O Bilaad al-Shaam! You are in Our Hearts!