17-year old Maria Khan attended the event and sent in a detailed account of the evening, which was also attended by our Editor-in-Chief, Hena Zuberi. We thank Maria for helping promote a great cause through volunteering time to write about the fundraiser. Jazaakillah khayr!

Young readers are  invited and encouraged to send in their articles and blog posts to muslimkidsmatter@muslimmatters.org. 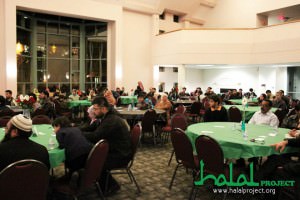 Generosity, change, and equality were all advocated by the speakers last Saturday night, 19th November 2011, at CSU Northridge in support of a fundraiser for non-profit organization working for the Muslim community.

“We gather here inshā’Allāh to raise funds and to show Muslims are counted for… as we need to be a fabric in this society, be a part of the change,” said Omar Jabran, the MC for the night.

Jabran’s words commenced the program for Halal Project, an organization dedicated to serving ḥalāl food (food ritually fit according to Islamic law) to any in hunger without discrimination on the basis of ethnicity or religion since 2009.

“Let’s give for the poor of humanity and (the) hunger of humanity,” said Mufti Ibrahim, religious advisor for Halal Project.

He said the concept of the organization is unique as it wants to bring a balance to the society by giving to all humanity, not just to Muslims or to a specific race.

“Let’s introduce to the American society, our culture and bring respect to our title,” said Ibrahim, as he gestured to the room filled with about eighty people. Ibrahim said they want to bring back charity on a permanent and regular level, in the Islamic way, which brings equality with justice.

He said that whether with time or money, if one is suffering from hunger, it is our responsibility to feed them as a part of humanity. “Who is the face of Halal Project? It’s you all, everyone,” he said.

Farid Shahid, 19-year-old Director of Marketing for Halal Project spoke about the history and previous efforts, including the Somalia drought drive, the Pakistan flood drive and the several hundred meals fed to the hungry at Skid Row, Los Angeles on a monthly basis.

“It’s an amazing feeling to feed a hot bowl of biryani (South-Asian rice and chicken dish),” said Shahid, drawing laughter from the audience. He also talked about the new project to have Muslim families in need be able to sign up to receive ḥalāl groceries, which will progress with donations from the public.

“We do all this for the sake of Allah Subhanawatallah, we don’t need anything, not even a thank you,” said Jabran before he introduced the next young speaker of the night.

Osama Shahzad, a 19-year-old Pierce College student performed a poem he wrote himself called “The Enemy.”

“Last time, I completely forgot and it was a disaster… well here goes nothing,” he said getting smiles from the audience.

Shahzad recited and performed his poem, centralized around the concept that Muslims are their own worst enemy when they don’t show for what Muslims really should be portraying. He received cheers and claps from the audience.

“Skid Row. You forget you’re in the U.S. when you’re there,” said Hena Zuberi, Editor-in-chief and blogger at MuslimMatters.org.

She said the hungry people, the trash, the trolley carts are all so astonishing and the scratches you can see on the parking meter, which mark their respective territories.

“They come here waiting to die. They’re addicts, orphans, veterans, mentally ill… and many of them are Muslims.”

She said they are a lot like us, they lose their jobs, then their homes and wish to find a job but can’t because they don’t have an address.

“Back home, we see hungry people and we feed them, why don’t we do it here?” Zuberi questioned the quiet audience.

She believed it was wrong that people only send charity to wherever they are originally from, rather than giving to everyone and also that sacrificial meat can be given to Non-Muslims too, contrary to the general belief that it is something prohibited.

“Home is where our children are born and raised, this is home,” said Zuberi.

Zuberi said she tells her preteen daughter to be active and involved, and to showcase Islamic values. “We need to leave our Muslim bubble.”

She said a billion humans are in perpetual hunger while two billion are overweight or obese. “Allah put enough food on this earth, we upset the balance.”

She said we should remember to count our blessings, to feed the hungry and clothe the poor as the illusion that “everything’s okay” is wrong and that it is everyone’s responsibility to give.

“(Being) poor as a person’s own fault… does not exist in Islam,” she said.

She said the kids of Halal Project – the youngsters – are all volunteers that stepped up to the plate, putting out a positive message. She talked of how Steve Jobs became Buddhist because every Sunday, a Buddhist temple would serve food while none of the mosques in the community did that.

“Donations went down 6.6%, according to Helping Hands USA… Muslims need to step in and fill that gap,” said Zuberi.

She said everyone must believe and empower the youth because they are capable of so much and they are the future. “Spread Islam through character, like our Prophet Muhammad (ṣallallāhu ‘alayhi wa sallam).”

The next speaker, Imam Suhail Hasan Mulla, spoke about generosity and its ties with the teachings of Islam, especially as practiced by the Prophets.

“No one is a true believer if you do not love your brother what you love for yourself… your brother in humanity,” said Imam Mulla.

He said that Islam teaches us to share and in reality we Americans are included amongst the top 1% wealthy people of the world, thus it should be a priority to reach out to others.

“Generosity is a tree from the tree of jannah (heaven),” said Imam Mulla. He said the Prophets would give to everyone and that’s what helped spread Islam.

He shared the story of the Prophet’s wife, Aisha (raḍyAllāhu ‘anha) who had three dates in her pantry and gave it to a mother and her two daughters, who came to her doorstep in hunger. The mother broke her date in half and gave it to her daughters, without thinking her own hunger.

“One date got her jannah,” said Imam Mulla.

He said Prophet Muhammad ((ṣallallāhu ‘alayhi wa sallam) said a person’s wealth is not decreased when they give to others, rather they’re rewarded by Allah.

“A true believer is… if what you do is according to what you say,” Imam Mulla, said ending his speech with to applause from the audience.

Daniyal Motiwala, a current CSUN student and member of Halal Project, came up to recite a poem which he dedicated to all those who believe they can judge others when Allah is, ultimately, the only Judge.

“We, as a society, don’t think anymore… when did we become like them?” said Motiwala at the high point of his poem, ending with a solid statement and cheers from the audience.

Jabran then spoke of Prophet Muhammad (ṣallallāhu ‘alayhi wa sallam) giving automatically without ever thinking of his own needs and wants.

“Let’s be among those who want to change, let’s see examples of Muslims helping,” se said.

At 8:30 pm, as dinner was to be served, a member of Helping Hands USA unexpectedly came up to thank Halal Project and commend them for their determination.

He said that Halal Project had contacted more than a couple of organizations to be able to donate to Somalia and they were rejected many times but unlike most organizations that would give up, they continued striving for a greater cause.

“We not only give but continue to give and support,” said Ashraf, the Helping Hands USA member, ending the night with those words.

Learn more about Halal Project at  www.halalproject.com and their Facebook page here.

Being A Stay-At-Home Dad – A Muslim Perspective