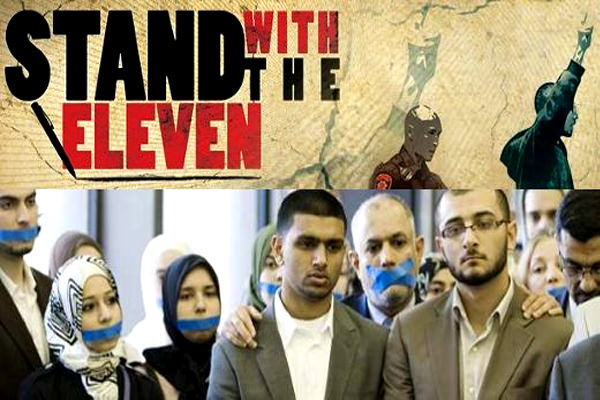 The jury has found the 10 Muslim students tried GUILTY on both counts.  The judge has ruled a sentence which includes:  a 3 year informal probation, 56 hours of community service with a non-profit organization for each defendant, and $200 in fines.  The sentence will most likely be suspended if the students complete their community service before January 31st and their probation will most likely be dropped after 1 year.  The judge made these rulings based on the students’ clean records, being productive members of the community, and because he believes that the students’ actions were political.

Walk the talk! If you REALLY believe in the Irvine-11 and what they are doing for ALL of us, then donate towards their legal fees here: http://www.mlfa.org/irvine-11 (click on DONATE button top left)

Message of support on twitter: Send a msg to @irvine_11 so these brave heroes know how proud we are of them.

As we all await the jury verdict in the Irvine 11 case with bated breaths, I wanted to take the opportunity to talk about the “big picture”, especially since the Israel Lobby minions are in full swing to change the narrative of what has become one of the biggest fiascos in the American justice system history.

While the Defense lawyers did an admirable job arguing the specifics of the case, the fact that some people are confused by the technical legal issues in play is exactly why it is important to redouble our efforts to maintain the big picture and the “real” facts. None of what I am about to say is new, but we cannot say it enough in order to counter the misinformation being spread online:

If these were not Muslims, there would be no case

I think this is so obvious that it needs no explanation, but nevertheless needs to headline any story on Irvine-11. Why? Because we have had documented cases of nearly identical situations that have occurred with other student groups and individuals doing the same sort of protesting at events, but none ever facing prosecution. In fact, is there any case in our entire American legal history, where individuals are being prosecuted for sloganeering in a public speech? None! If such a precedent existed, you would have bet that would have been front and center for the prosecution.

Let’s refer to two examples to highlight my stated assertion:  One in which a Muslim speaker was nearly shutdown AT the SAME university (UCI), and secondly where non-Muslims (Jewish students) protested an Israeli speaker, Netanyahu. So, these two events cover the entire spectrum of possible scenarios.

If an Israeli speaker was not on the other side, there would be no case

Mearsheimer and Walt captured the spirit of the Israeli Lobby strength in their book that literally shook the Israeli-firsters in America. Since then, there has been a steady attack on both, each accused of anti-Semitism and every evil in the world. Ironically enough, their speeches have been stopped by the Lobby (one example); so forget about being heckled, they weren’t even allowed to make their speech at all.

If the power of the Lobby was in any doubt, then I hope that those doubts were put to rest by the recent clamoring of BOTH Republicans and Democrats, both Congressional and Executive to please the Prime-Minister of Israel, belonging to extremist right-wing Likud party (no different from Hamas on the other side) on the UN Palestine issue. Even the Nobel Peace Prize winner President Obama (the Nobel committee must be highly embarrassed by its strange decision that is being proven wrong daily) is scrambling to declare his love for Israel, and could only describe Israeli suffering in his UN speech, not offering even a single word of solace to the ACTUAL people being occupied and brutalized, Palestinians.

It is one thing though for the Israel-first part of the Lobby to influence America’s foreign policies, but it is quite another when it starts affecting the fabric and soul of the American nation, trying to take away the liberty and freedom of expression from those who voice anti-Israel positions. The Israel Lobby realizes that the new generation, including Jewish Americans (as we see with Jewish Voices for Peace), will not necessarily swallow all of Israeli hasbara. More and more Jewish voices are rejecting not only the hawkish explanations for why peace cannot be achieved, but they are proactively pushing for the silenced Palestinian voice in American circles. Thus for the Lobby, with the Congress  firmly in control, The Lobby has been actively targeting American campuses (campuswatch website by Daniel Pipes is just one of the many efforts to silence any anti-Israel dissent). Thus when the Irvine-11 were able to challenge the Lobby’s campus strategy, the Lobby saw it as a test, and felt the need to try to use the American justice system to help in their political goals.

Why the Israel Lobby is willing to bet on an American jury to deliver the unfathomable.

While we pray and hope for fair-minded individuals on the jury to deliver the Irvine-11 from this witch-hunt, the Lobby is also likely optimistic, betting that the negative public opinion on Muslims and Arabs will deliver a decision that would be otherwise unfathomable– a guilty verdict. Think about it. The American jury system is all about being tried by one’s peers. Whenever there is an imbalance in the jury composition relative to the defendant, we can and have seen lopsided results. That is why African Americans and other minorities, in general, have found it harder to achieve justice. On the flip-side, when the jury is swung enough in favor of the “peer-type”, you can get the OJ Simpson type result as well.

With Muslims representing only a fraction of the American population, and the prosecution ensuring that no Muslim will serve on any jury that is trying Muslims, Muslim defendants are hardly being tried by peers. Consider all the cases against Muslims thus far where their faith was “part of the equation”, number of jury members Muslims = zero. Furthermore, considering the nearly 50% negative opinion of Muslims, is it too hard to imagine that statistically one can expect 50% of any jury will already be biased against a Muslim or Arab defendant, especially when the case highlights religious or ethnic identity? Jury is composed of humans, and if they have a prejudice, regardless of the specifics of the case, they will tend to be moved by arguments that resonate with their biases and reject those that contradict the biases. Rarely will you find a person who is able to shut off the prejudice part to be entirely objective.

Whatever happens today, the Irvine-11 will be victorious

Even though I have no relation to any of the students, have never met one of them, I still feel as if I too am on trial, standing besides them. And I am only one of millions (composed of people from all faith). Each of the Irvine-11 (or 10 now) likely could have accepted some plea bargain to get off for some sort of deal, yet they stuck to their principles because they realized that the fear-mongering and witch-hunt against them by the Israel-firsters was not about them, but about the larger question of freedom of expression in America. And in this case, specifically the freedom and right to support A CAUSE (Palestine in this case), regardless of whether one believes in the cause or not.

So whatever happens today (we pray Allah frees them), the Irvine-11 individuals will be victorious. And I hope and pray that the community supports them with everything at their disposal (jobs, security, etc.) if the jury falls to its own prejudices and the American justice fails them. And if indeed the Defense wins the case against the odds, then count the Defense team among the heroes!

In conclusion, as Evelyn Beatrice Hall said (often quoted by right-wing but only in talk, not in action), “I may not agree with what you say but I will defend to the death your right to say it”, and that should be the standard for all fair minded Americans. Prayers for Irvine-11 & for America: Acquittal will be victory for BOTH. Conviction will be one of darkest chapters ONLY for USA.

Irvine 11: Trial Comes to an End