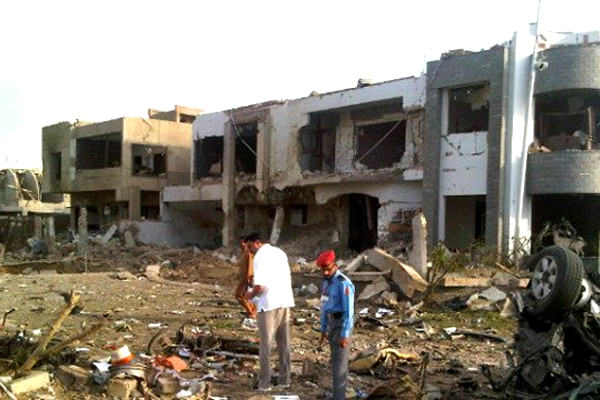 Five days ago, my emotions were high as I wrote the preface to Taliban attack school bus kill 4 children | Peshawar Pakistan.

Attacking children was a real low. However, it was still out in Peshawar. Today, the horror came very close to home as a bomb blast outside the house of Senior Superintendent of Police (SSP) Criminal Investigation Department (CID) of Pakistan, Chaudhry Aslam. Aslam heads the counter-terrorism unit of the CID in Karachi. According to Ali Chisti of The Friday Times, “Chaudry Aslam is the one who killed Rehman Dakait (a notorious gangster in Karachi), captured numerous TTP, alQaeda & Quetta Shura members.”

What makes ones blood boil is that Aslam’s house is right next to 3 major schools of Karachi and the area has several more in the vicinity. Thus, the blast which occurred at 7:26 am was at a time when the area was filling up with school going children and their parents. Had the blast occurred 10-15 minutes later the carnage would have been horrible. The initial reported death count is 08 people which includes 06 policemen and a child and her mother. The child went to the school my cousin’s wife teaches at and their children study there. They were safe Alhamdulillah but it was terrifyingly very close to home. Not that the death of any in Karachi is superior to that of that the people in Peshawar and other areas. Tehrik-i-Taliban Pakistan claimed responsibility for the bombing, saying Aslam had arrested and killed many of its fighters. “We will attack other police officials as well who are taking action against our people,” TTP spokesman Ehsanullah Ehsan told Reuters by telephone from an undisclosed location.

Speaking to the media right after the blast (partial video above), Aslam remarked:

“I was sleeping when they carried out this cowardly act and rammed a vehicle packed with explosives into my house.”

“I will not be cowed. I will teach a lesson to generations of militants.”

“I did not know that these terrorists were such cowards that they would attack sleeping children.”

Karachi, has not been a stranger to violence and around 10000 civilians have been killed in Karachi since 2002 due to ethnic, political, sectarian violence and incidents of terrorism. In August alone more than a 100 people were killed due to ethnic violence.

Some of the tweets this morning showed the reaction of citizens:

Its time to raise ur voice against these brutal inhumane terrorists responsible for slaying our little children daily. #Pakistan #terrorism (via @RiazToori)

“Damn , if I wanted a holiday for my birthday, I would DEFINITELY not want one if it meant a bomb blast wd occur” – schoolgirl #Karachi (via @BeenaSarwar)

“We saw this guy next to our car, his face was filled with blood and he was waiting for the ambulance!” – says my daughter’s friend #Karachi (via @BeenaSarwar)

Trying to explain to my 4yr old – who’s just woken up – why its not safe to go to school. #hatethis #Karachi (via @SalmaJafri)

“the blast was shit scary!” – friend of my daughter on facebook chat #karachi #blast (via @BeenaSarwar)

Blast was more powerful than needed to target just the SSP’s home: 6-10 ft crater, nearby cars and houses damaged, massive sound (via @MadihaSattar)

The school teacher who was killed worked at Washington International School. Always used to reach early. Colleague of my mother’s student. (via @Sabeen)

Just spoke to wife who’s at the scene. The explosion happened right behind X’s school. They would’ve been there at the time of blast if not for the wrongly parked car blocking ours in the apartment. (via @farrukhahmed)

Kid’s school closed for next 3 days , all windows blown out (via @schawlaf)

Kids have nerves of steel, if we’d seen this much carnage at our times, many would be needing psychological help #Karachi #ChangingTimes(via @schawlaf)

People plan for next 10 years or even next 10 days, here you can’t even plan the next day (via @schawlaf)

#Pakistan – all is well until it doesn’t happen to you and when it does you are just news :'(

Pakistan Floods 2011 | This is the ground reality | The Friday Times