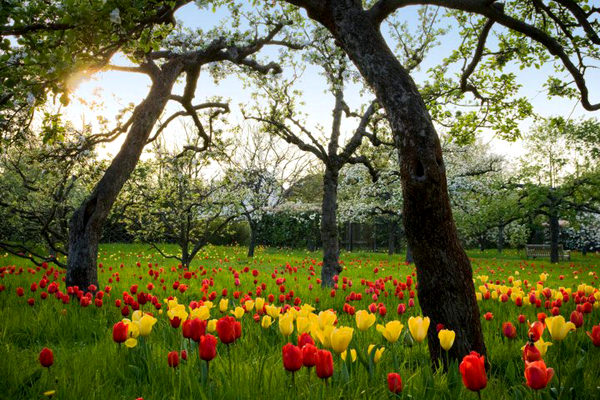 Nothing is lost. The years of your life that you poured like water into a now-failed marriage, or the immense love and attention you gave a child  or brother or friend who now treats you like an enemy or a fool, or the work you did for a company that closed down, or the sweat and thought you put into a project that ultimately failed… none of that is lost.

It’s particularly hard when a relationship collapses, leaving bitterness where previously there was passion. It’s galling. You feel confused, betrayed, depressed. Even years later you might feel that you wasted those years, that you poured out love from your innermost core and watched it go down a drain.

The Viewpoint of Faith

I understand the feeling. I’ve been there. I’ve been perplexed and depressed with the phrase “Everything falls apart” running through my head, thinking about how all things collapse in the end and good things never seem to last.

But that is the narrow viewpoint of depression. It is a singularly negative viewpoint, and therefore it is not the viewpoint of imaan (faith), because faith is a thing of hope. Faith gives you a window into the unseen, the world that Islam calls al-ghayb, and one of the elements of the unseen world that Allah has informed us of is that nothing is lost:

“And their Lord responded to them, ‘Never will I allow to be lost the work of [any] worker among you, whether male or female; you are of one another.’” (Quran, Surat Aal-Imraan, 3:195)

Allah knows the frustration and pain we feel, so He assures us that none of our deeds are lost, not only because He sees all but because we are “of one another;” in other words, we human beings are all connected. We are all a part of each other and so any love and work that one of us puts forward affects us all.

Your love did not evaporate into nothingness. Your sweat and blood were not poured down a drain. Those years of your life, those anxious moments and anxiety dreams were not in vain. Your silent good deeds, and the most tender moments of your heart, were witnessed by the only One who truly counts for Allah sees all. Everything is seen and valued. Every good deed is blessed, every act of love is rewarded, everything is returned to you in barakah many times over. Nothing is lost.

The Prophet Nuh (peace be upon him)

When the Prophet Nuh (peace be upon him) preached to his people, calling them to tawheed (monotheism) amidst the whirlpool of polytheism in which they were caught, they stuck their fingers in their ears and mocked him, and in the end the flood came upon them because of their wickedness, destroying them all except for a handful of followers and destroying even Nuh’s wife and one of his sons.

When this happened, was Nuh a failure? Were his ages of hard work in vain? Were his deeds lost? Do you find yourself saying, “Poor Nuh”?

If so, then you have missed the point. Nuh was a Prophet, a hero, and a survivor. He fulfilled his mission and delivered the message. That was his job and he did it. It was witnessed by Allah, so Nuh will receive his reward. Furthermore, he was saved from the flood and went on to have more children and to leave his own legacy of offspring and teaching. Here we are, thousands of years later, knowing his name, repeating his story, learning from him! His story has become a part of universal human mythology. How then could he be a failure? He affected the world in a profound way until the Day of Judgment, and he achieved that only by doing his job.

So I would like to suggest a replacement for the negative mantra, “Everything falls apart.” A truer statement, and one based on faith, would be, “Nothing is lost.”

Karma, the Universe and the Law of Conservation of Energy

But what if you don’t believe in Allah? Well, first of all I would say that’s a shame, because every time you put a bite of food in your mouth that’s a grace and a blessing from Him. Going back to Nuh for a moment, the Prophet Muhammad (peace be upon him) said, “When the death of the Messenger of Allah Nuh approached, he admonished his sons: ‘Indeed I would give you far reaching advice, commanding you to do two things, and warning you against doing two things as well. I charge you to believe that there is no God but Allah and that if the seven heavens and the seven earths were put on one side of a scale and the words “There is no God but Allah” were put on the other, the latter would outweigh the former. I warn you against associating partners with Allah and against pride.’” (Saheeh al-Bukhari).

But even so, if you are Buddhist or Hindu, then you believe in cause and effect on a cosmic level. You believe that the good you do returns in one way or another, and any evil you perpetrate also boomerangs into your own soul. These are the fruits of karma. So again, nothing is lost.

If you deny God and believe only in science and energy and matter, then you know that still, nothing is lost! The universe is a finite system. Everything began at a single point in time – what scientists call the Big Bang. The universe is expanding, flying out in every direction, until one day in the unimaginable future it will reach the limits of expansion and begin to contract, slowly at first then faster, drawn inwards by gravity until it collapses into the nothingness from whence it came. Within this finite universe, energy can be transformed into matter, or matter into energy, but nothing new is created, and nothing is lost. There is no universal drain. In science this is known as the Law of Conservation of Energy:

“Energy in a system may take on various forms (e.g. kinetic, potential, heat, light). The law of conservation of energy states that energy may neither be created nor destroyed. Therefore the sum of all the energies in the system is a constant.”

Personally, as someone who has suffered from the tendency of all things to fall apart – what we might call the entropy of love – the purely scientific perspective is cold comfort. When I’m mourning the loss of a friend, it’s no comfort to know that the universe is a closed system and that nothing is lost in the physical, atomic sense.

But it is a great comfort to know that all the love, work and good I’ve done means something, both in a spiritual sense and in a human sense.

The American writer Washington Irving wrote, “Love is never lost. If not reciprocated, it will flow back and soften and purify the heart.”

Every act of mercy, every charity, every moment of love you have given another human being, ripples out through degrees of separation, affecting the world in a profound way. Even if a relationship is broken, even if the person now views you with enmity, it doesn’t invalidate what you did. The love that you gave is seen by Allah. On the earthly plane, that love affects your own heart in good ways, then it percolates out to those around you and changes the world. It matters. It was not in vain. Nothing is lost.

Since I’ve been speaking of love, let me finish with a reminder of the most important love of all. The famous scholar Ibn al-Qayyim al-Jawziyya wrote:

The greatest love we can have is our love for Allah, and it is always requited. Allah’s love descends upon us in every moment, in more ways than we can see or understand. Alhamdulillah.