“They’ve died, two of them… The last one is fighting for his life, hopefully he’ll be fine! InshaAllah” Muttered my cousin in awe of the latest news. “How can this be happening in the UK?” It was 4 am in the morning and the news was leaving us distressed. Haroon Jahan, 21 and Abdul Musawi, 30 had been killed in the riots, according to Sanghat Channel who was reporting live, they had been run over by rioters as they fled their crimes. Later in the day, Shazad Ali, 31 also passed away due to his wounds. Inna lillahi wa inna ‘ailayhi raji’oon.

The pain of losing members of the community was visible, in the news and the community around me and to lose them to the sheer stupidity of various individuals hurt more. However, another fear began to develop, thus far the Muslim community had been busy in the Masjid at night and during the day busy in their own lives, and the youth were yet to get involved in the looting and general anti-social behaviour. Though now, there was a potential backlash – an opportunity for some members of the community to make trouble and for others, an avenue to show their anger. Some would say stupidity for stupidity.

“Tensions are already high in the area. It’s already bad enough what we are seeing on the streets now without other people taking the law into their own hands,” Tariq Jahan, the father of Haroon said.

Let us remember that it is Ramadan, this should not be forgotten, a time when even those that have not been to the Mosque take a trip to connect with Allah. It’s a beautiful month and we need to keep its trust, in being the best in terms of conduct. These young men fought against being held under fear, their stance was to protect their community, their Masjid and we have to honour what they were killed for. Retaliating only goes against what they died for, and in fact retaliation at this stage by anyone will only further harm the community.

We are responsible citizens of the UK, this is our residence and we need to protect our community. Let’s focus on those who are causing destruction to our neighbourhoods and look at their characteristics.

1. They have a lack of morality, some would argue religion – There is nothing holding them back from committing such acts. Islam teaches us that we are ultimately accountable to Him; in fact He tells us we’re coming back to Him…

“To Allah is your return, and He is over all things competent.” Surah Hud [11:4]

Hence, whatever actions you take you will be held accountable, and they’ll be multiplied by everyone you harm by it.

2. They lack parental support – You have parents or guardians, they do worry about you, hoping you will return safely. Whatever actions you will take will affect those around you, and those that are harmed, it will harm their loved ones. Remember, you should treat others the way you wish to be treated.

3. Lack of concern for their own community – Your community is your future, it’s where your children will grow up, do you wish to bring your children up in gang fights, unrest and terror?

4. They lack a long term vision – Islam teaches us to look forward in life, in fact it tells us to aim towards Jannah. You need to consider, what do they have to live for? You have been blessed and you need to take care of these blessings, hoping for a bright future, regardless of where you are at this moment of time.

We are blessed with a beautiful month, we can’t and shouldn’t let others effect our worship. This month shall only come once, hence we need to ask ourselves; did we take all we can from it?

Let’s be honest, you’re awesome! The community thus far has been united. I guess Iftaar and Taraweeh have been keeping us busy and our youth by in large have not got involved in the anti-social behaviour alhamdulillah, and hence there has been no negative media coverage, we need to keep it like this. You need to continue to help your community and we need to understand Allah ‘azza wa jal is the Most Just, whoever is hurt, or dies as a result will be given full justice and they are blessed, now the question is will our actions be equally as blessed?

The fear of a backlash is a concern, as the community who takes the law in their own hands will only suffer. This is not about race, religion or gender; this is about keeping us safe. We know at times there is a negative portrayal of Islam in the media, we need to use this opportunity to say we’re not like these insolent youth, we’re better than that! 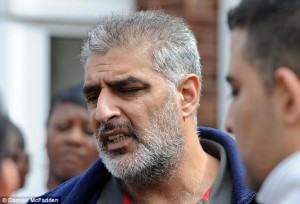 The father of Haroon added that he did not blame anyone and it was his son’s fate:

These are indeed testing and frustrating times for us, not only is our country in turmoil, the fear of what happens next lingers.

Once again this brave figure standing on a wall in front of a crowd he said:

“I lost my son. Blacks, Asians, whites – we all live in the same community. Why do we have to kill one another? Why are we doing this?”

It is in these moments that we have to remain strong, whether you’re a frustrated youth, a worried parent or an onlooker, it is your responsibility that you assist in ensuring there is harmony in your community.

This can be done by various means:

1. Minimising the fitnah – Either by keeping away from such occurrences so no-one else gets hurt, assisting in cleaning your town, or protecting your neighbourhood. At times there is a need for self defence, however this is something you will need to measure, we are taught that with hardship comes ease, the Police will gain control, we just need to be patient, assisting them where we can, whilst remaining safe.

2. If you’re a parent – Know what you’re children are doing, they are your responsibility and you need to ensure they’re off the streets and safe in their homes.

3. If you’re a frustrated youth – Stay away from the trouble, as you’re just causing more harm, rather than being reactive, be proactive and protect your community. The trouble shall pass and only the ruins will be left, which only you will have to deal with.

4. If you’re social media crazy or a community leader – Then circulate this article and the main aim of the message, this is our country, we need to make it our future and prepare it for those who will come after us.

I end with three words; peace, unity and tolerance. If we achieve these, we will be successful and get past this with an array of lessons, so we can all make Britain a better place.

“United For Change” is What’s Needed