There are posts on MuslimMatters that we believe are overlooked â€˜gems\’ that NEED to be read, especially by our new readers.Â  The link to the original post is provided for readers to view the original comments or start a new conversation here.

I pass by it every time I go shopping to the fashion district in downtown Los Angeles, you cannot avoid it. Right past the diamond district and the wholesale flower market in the richest country in the world, in one of the richest state\’s richest counties, under the shadow of Hollywood actors\’ condos is the human stain that is Skid Row. You forget that you are in the US when you enter the urine-drenched, graffiti covered streets of the homeless capital of the world. There is nothing like this anywhere in the country: complete desolation for 50 blocks. Ten of thousands of homeless individuals on the streets, shopping carts full of their only possessions. Signs etched in the parking meters demark territories, while blue tarps cover makeshift cardboard box condos. Trash is strewn on every corner. They come here waiting to die, the addicts, the mentally ill, war veterans but many are there crippled by financial crisis or foreclosures. Some can\’t get a job even if they want to because they do not have an address; it is a vicious cycle that they may get trapped into for years. Other have jobs but cannot afford housing.

The guilt of speeding past them, ignoring them, scared to look lest one of them caught my eye, haunted me. Â Back in Pakistan you would justÂ feedÂ someone who was so obviously hungry. Â â€œThey have a right over you, you live in this country,â€ whispered my soul. I started volunteering at our local homeless shelter. â€œNot in our backyardâ€ signs cropped up, funding dried up and they shut it down after the worst of winter was over. What now?

Then I found out about Humanitarian Day – an event that allows me to put my Islamic beliefs of charity into practice, one the organizers choose to hold in the month of Divine Rahmah, Ramadan.

The founding organization ILM Foundation has organized events serving the needy, where line items are distributed such as; hygiene kits, warm meals, clothing and medical services by the UMMA Community Clinic; all are administered and given free of charge.

Humanitarian Day Â is hosted in Oakland, CA; Santa Ana, the Inland Empire, Long Beach, Baltimore, MD, Â 20 other cities in US and internationally in Ghana and Indonesia this Ramadan. A Humanitarian Day event is â€œFaith in Actionâ€ counteracting negative stereotypes of Muslims in America.â€

Those kids cheering and greeting the homeless in the beginning of this clip are my â€˜girls\’- MYSCV. Our youth group boys were manning the canned food stand. We go there every year, alhamdulillah it has become a Ramadan tradition – these iPhone-toting, overprivileged kids see for themselves how the have-nots in this country live. They fundraise their contribution through bake sales and experience the bliss of actual giving. See, kids who grow up in the â€˜third world\’ see poverty on the streets everyday but here in the US, we are surrounded by the false security of Wal-Marts and Pizza Huts on our suburban street corners. So we forget to remember our blessings, to feed the hungry and clothe the poor. 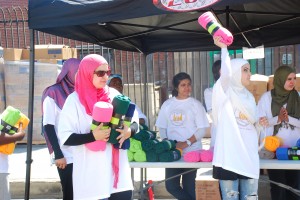 On Humanitarian Day, every homeless person is greeted, handed a bag and escorted through the line. Booths of hot food, socks, blankets, are lined with balloons, manned by Muslim vlounteers. As many as 2000 are checked by volunteer doctors, given medication, eye exams. Â The atmosphere is festive, a huge celebration, a party in an otherwise miserable life. ” You are so nice, I feel like a human today,” smiled a lady as she tucked newly acquired undergarments into her bag.

“We are fasting and want to share our joy for fasting by feeding the people, loving people, immigrants, indigenous Muslims, universal Muslims, together.” I sat down with Imam Sadiq, the retired Imam of Masjid Ibaadilllah and one of the founders of HD. He, along with Naim Shah Sr. affectionately known as Papa Shah, started feeding the homeless during Ramadan but were urged by the World Trade Center bombings to coordinate a united effort to solve domestic issues. “We don’t want to proselytize, we are just concerned about humanity.”

Every year, the dynamics of the homeless change – last year there were many more middle class homeless individuals who had lost their homes due to the recession.Â  A gentle, proud man, with searing blue eyes, his milk chocolate skin giving away his Caucasian and African heritage, walked up, a polo shirt neatly tucked into his khakis. His wife urged him to take a pair of socks from the booth, â€œI can’tâ€ he said, shoulders slumped in defeat. As he walked away, I saw his laptop carrier slung on his shoulder – Kuwait Oil Co. embroidered in a corner. She reached out, her wedding ring glistened in the sun, â€œLord bless you, may I take two?â€ she asked pragmatically. 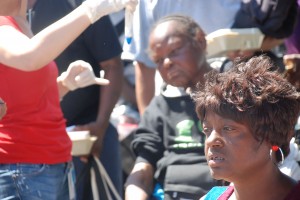 There are some familiar faces too, the crack addict whose nails are always done, the old man with coke bottle glasses and a sweet smile. They are friendly and very concerned about each other. I see babies grow up to become children. This is not a place for children. We have billions of dollars to spend on wars across the world, while children sleep on the street and we turn the other way. Omar Ricci, a police officer, Â has helped provide security detail for the past ten years. A Muslim, he comes back every year because “this well-planned event shows an alternative image other than the mainstream narrative Â of Muslims.”

What would you say to Muslim Americans today, I asked Imam Sadiq, who is also the founder of Islamic Shura Council of Southern California, “We need to stay positive, look past the grievances…the most important thing is to keep being Muslim. People are tired of words, we need not be more vocal but be more active. Actions speak for words.” Â Islamophobia was on my mind, as I spoke to the Mormon partners of the coalition, Steve Gilliland and his wife, Judy. They are from the Church of Latter Day Saints’ Southern California Public Affairs Council and have supplied the lovingly hand packed school and hygiene kits for HD for seven years. “We have more in common with Muslims, socially, culturally, in areas of health, community service, family values, I could go on for a long time,” the Mormon clergyman advised us to “not let the hate intimidate (us), let people know who Muslims are, to know Muslims is to love them.”

Sister Taswiyah Mutazz is the director of food programs for ILM. “A lot of us are a paycheck away from being on the other side of that line;” Â as tears formed in her compassionate eyes, she recounts countless stories of the challenges women and children face on these streets. This was the first year, I heard so many reports of homeless Muslims, men and women, too ashamed to walk into a masjid, without access to a place where their faith can help them recover.

This isn’t just a feel good once a year event – these people live near here, they are here every other Sunday with homecooked and sack lunches, sponsored by Muslims communities across Southern California. However, HD 2010 brings demands for a permanent Muslim mission on Skid Row. General Jeff, “the mayor of skid row,“Â pleaded on behalf of his community. ” That center near close to ground zero – no disrespect to the victims but 9/11 was a one day disaster, skid row is a lifetime disaster.” “If they are caught sleeping on a bench, they get a ticket, enough tickets earn a warrant, [which] lands them in jail,” stressed Naim Shah, Jr. the Excecutive Director of ILM Foundation. “What we do right now is direct service, now the coalition needs to move and work on policy, find the systamatic cause of why those people are in that line and help change the way people, children, and the elderly are treated. Muslims do not have anything substantial to show about everyday American issues.”

They are dream of a place with a soup kitchen, aÂ mussallah,Â life assistance programs, where people can take showers, and a shelter for women and children – open 24 hours. A place that breaks the status quo – most missions here are single-room occupancy and do not accept anyone after a ‘certain time at night’ and make the homeless leave every morning. May their dream become reality. Ameen.

My girls learn face-to-face how to treat every human with dignity, whether Muslim or not, rich or poor. They didn’t just hand out Qurans but follow the mighty example of the Prophet (SAW), who showcased Islam with his blessed behavior, not just words.Â As I drive the girls back to our cushy homes – they are unusually quiet, thankful, energies well-spent, their fasts finally kicking in.

If you want to start Humanitarian Day in your city – call Imam Sadiq at 626-398-3900 or Naim Shah at 626-644-8291. The Coalition to Preserve Human DignityÂ will supply you with guidelines, send a crew to show you how to set up the event and train your organization in working with the homeless. Their email address is info@humanitarianday.com

Saying “I Don’t Know” is Half of Knowledge