On the 27th of February 2011, an 86 year old Turkish man died in a hospital in Istanbul. However, he was no ordinary person. Necmettin Erbakan was one of the great Muslim leaders of the last century and a reviver of Islam in Turkey. The son of an Ottoman Qadi, Necmettin was born into a turbulent and unsettled world. The Ottoman Empire that had ruled large parts of the Muslim world for five centuries had just been dismembered and the Caliphate was abolished 2 years before he was born. His pious family were now faced with an entirely new reality – the aggressive militant secularism of Mustafa Kemal.

Within a few tumultuous years, Turkey had gone from being the last bastion of the Islamic world to a strange land where the absolute majority were Muslims but the adhan was banned in Arabic, Medrasa were closed down and all displays of faith disparaged. The fez and the veil were discarded as if they were chains holding back the march of progress. [1] The emphasis on Muslim unity was replaced with an even greater emphasis on Turkish Nationalism. To top it all off, the one-time Ghazi (or Islamic Warrior) Mustafa Kemal had now transformed himself into a “benevolent” dictator who was infallible, cultivating an increasingly extreme personality cult. [2]

The Turkey that Erbakan grew up in was one in which it was profoundly disadvantageous to be a man of faith, yet this did not dent his zeal. In his years at University, he used to lead the prayers for the few students who still followed even the most fundamental tenets of Islam. Interestingly, his colleague who performed the duties of the muezzin was Suleyman Demirel, who would go on to become the President of Turkey as well as an implacable foe. Soon after graduating as a mechanical engineer, Erbakan set forth his vision of a post-Kemalist Turkey that would return to the religion of Islam in a manifesto called “The National View.” [3]

He founded a party by the same name to help bring about this transformation. The party began to gain popularity and just as it was about to achieve critical mass, it was banned. 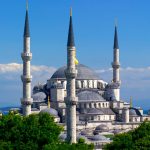 He then set up another political party with the same aim, but this too was banned. Undaunted, Erbakan picked himself up and started the process again. This time, due to infighting between the other parties, he actually got to become Prime Minister. However, the military elite decided that they could not tolerate a leader who openly believed in promoting brotherhood and cooperation between Muslims at home and abroad. Just over a year after he became Prime Minister, they sent in the tanks and forced him out. [4] Erbakan was back to square one again.

But Erbakan was more than just a politician with an Islamic outlook. In a lifetime of struggle and sacrifice, he kept the flame of Islam burning during the darkest days of the secular repression. His regular Islamic speeches and refusal to be cowed by intimidation, lifetime bans, and military coups showed to his countrymen and the world that not all Turks had abandoned the faith of their forefathers. Perhaps another leader would have been tempted to give up or turn to violence. The fact that Erbakan never despaired of raising Islam to its rightful place at the heart of the Turkish nation speaks volumes about his faith and determination.

Today, the President and Prime Minister of Turkey are his former students [5] and Turkey moves ever closer to taking its rightful place at the heart of the Muslim world. All this would have been unthinkable before a young engineering graduate decided that he must begin the process of change in his society. Necmettin Erbakan had his shortcomings; however, it is impossible to imagine the evolution in the psyche of the Turkish nation without him. Lest we become complacent, his final words, “work hard” were a reminder to his followers that the process of changing the situation of the Muslim Ummah is just beginning. May Allah have mercy on the soul of Necmettin Erbakan who earned his name “star of the faith.”

11 Ways to Impress a Muslimah for Marriage

The Role of the Muslim Students Association (MSA) in Society