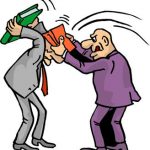 If we look back on the lives of the four imams – Abū Hanifah, Mālik b. Anas, al-Shāfi`ī, and Ahmad b. Hanbal – we find that they were extremely tolerant people. They were respectful of their contemporaries, predecessors and the earlier generations of Muslims, whether they agreed with their views or not. Indeed, they followed the example of their predecessors in being tolerant of differences.

Allah says: “And those who came (into the faith) after them say: Our Lord! Forgive us and our brethren who were before us in the faith, and place not in our hearts any rancour toward those who believe. Our Lord! You are full of kindness, most merciful.” [Sūrah al-Hashr: 10]

The four imams — the leading scholars who founded the four canonical schools of Islamic Law — never allowed past disagreements to cause them to disparage or raise suspicions about the people of an earlier generation who held divergent views. Likewise, they never called for an inquest of their contemporaries who disagreed with them and they never got involved in their affairs except in a positive way.

The four imams certainly disagreed with one another and with other jurists of their day, but they always maintained their calm in debate and disagreed respectfully. They never permitted others who spread their ideas to use their teachings as a source of conflict or as a means to cause division.

It could possibly be that the principle they developed, of coexistence in the face of changing political and social circumstances, came as a result of their engaging with the substantial societal changes they witnessed during the era in which they lived. They recognized a need to develop a clear and precise approach to respond to such changes.

It can be observed that none of the four imams ever accepted an official political post, not as judge nor magistrate nor anything else. At the same time, they also never constituted themselves as a political opposition. They never gave their support to the government’s political opponents, even though all four imams times suffered government persecution on account of accusations that they did. However, a close examination of the imams’ historical circumstances shows that such accusations were baseless. Instead, they were victims of the old idea: “You are either with us or against us.”

Their insistence on intellectual autonomy is what brought such suspicion upon them, along with how unscrupulous people would sometimes manipulate their statements and interpret their juristic verdicts for various political ends.

In truth, the four imams represented a third way: neither aligning themselves with the interests of those in power nor with the political opposition. This allowed them to carry out a vital leadership role of their own in maintaining social stability in a society made up of a number of contending factions: between the ruling class and the populace, as well as between a bewildering array of ideological factions and intellectual movements, not to mention ethnic and tribal differences. After all this, we can understand how they were so good at tolerating the disagreements of their colleagues among the various schools of Islamic jurisprudence!

They all kept a measured distance from the various contending elements in society while remaining fully connected to society. This made it possible for them to be a point of stability and balance, which protected Islamic civilization from a great deal of conflict, strife, and social disintegration.

The role they played in their times is all the more needed today with our widening social and class disparity and a weakened culture of tolerance, conditions that promote conflict whenever conditions are ripe for it.

The presence of an autonomous knowledge-based mediating authority is needed to act as a a source of strength for the weak and a moderating influence on the strong, to arbitrate in matters, and to impart to society the values of tolerance and mutual understanding. There is a need for those who can speak out for justice and the inalienable rights that are needed to ensure peace and security in any country, and which can prevent violent factions and extremist movements of whatever persuasion from developing.

The world contains nations where you find a strong government and an equally strong civil society. They are held together by organizing principles and their vital, political, social, and charitable institutions. This is what makes the government strong through its people and the people strong through their government.

Most Muslim countries do not enjoy this balancing of institutional power, essential for stability and continuity, which comes from the presence of mediating institutions that are widely recognized and accepted on both an official and popular level, institutions whose role is often only appreciated when their loss leads to the erosion of society.

Ideological and partisan disagreements, religious differences, and other potential sources of division do not inevitably lead to conflict and strife. Allah says in the Qur’ān: “It is He who has spread out the Earth for all His creatures.” [Sūrah al-Rahmān: 10]

Within the sphere of Islam, matters are referred back to universal principles and the legitimate needs of life that Islam upholds. When such a reference becomes impracticable due to the severity of the disagreement tor disparity of the parties involved and the matter cannot be brought to a resolution through dialogue, there still remains a broader circle for coexistence: the one of: “knowing one another” referred to in the verse: “O humankind! Lo! We have created you male and female, and have made you nations and tribes that you may come to know one another.” [Sūrah al-Hujurāt: 13]

This coming to know one another, this mutual and reciprocal knowledge of the other, is the foundation for social relationships necessitating goodwill, justice, and kindness.

It is possible that through such relationships you will realize your own best interests as well as those of the people you disagree with at one and the same time. We see this in so many aspects of life: commercial dealings, in public administration, health, development, and industry.

Returning to the four imams, it needs to be pointed out that the disagreements between them in Islamic Law were nothing compared to the disagreements that existed among the Companions and Successors. Moreover, they introduced through their own juristic efforts a number of opinions that were new to their generation. Therefore, it is wrong for anyone to claim that their views abrogate the views of their predecessors and exclude all views other than theirs.

The later scholars who worked within the framework of one of the four schools of law, though they did not usually go off in an entirely independent direction, never ceased to engage in choosing between different opinions and deducing new rulings on the basis of precedent. I have studied the legal preferences of the preeminent Hanbalī jurist Ibn Qudāmah, and found that he sometimes adopted a position that was at variance to what was adopted by all four schools of thought. He did so after acknowledging and discussing all of their received opinions. His judgments in these cases are often quite erudite and impressive.

We can find similar cases among the jurists of all four schools of law. This is because the views of the Companions, Successors, and other jurists are no less important than the views of the four imams. They were also from the earliest Muslim generations and theirs is a rich and valuable legacy which has been preserved for us in works like the Musannaf of `Abd al-Razzāq, the Musannaf of Ibn Abī Shaybah, and the writings of Ibn Mundhir.

When we look at the magnitude of the changes taking place in the world today, we can appreciate the value of there being such a broad spectrum of opinion during the earliest days of Islam. Their contributions should not be ignored, since they enrich our understanding of Islamic Law. Though there may have been times in the history of Muslim civilization that such a plurality of opinion was unnecessary for society to function, our present age is certainly not one of those times.

The History of the Caliphate