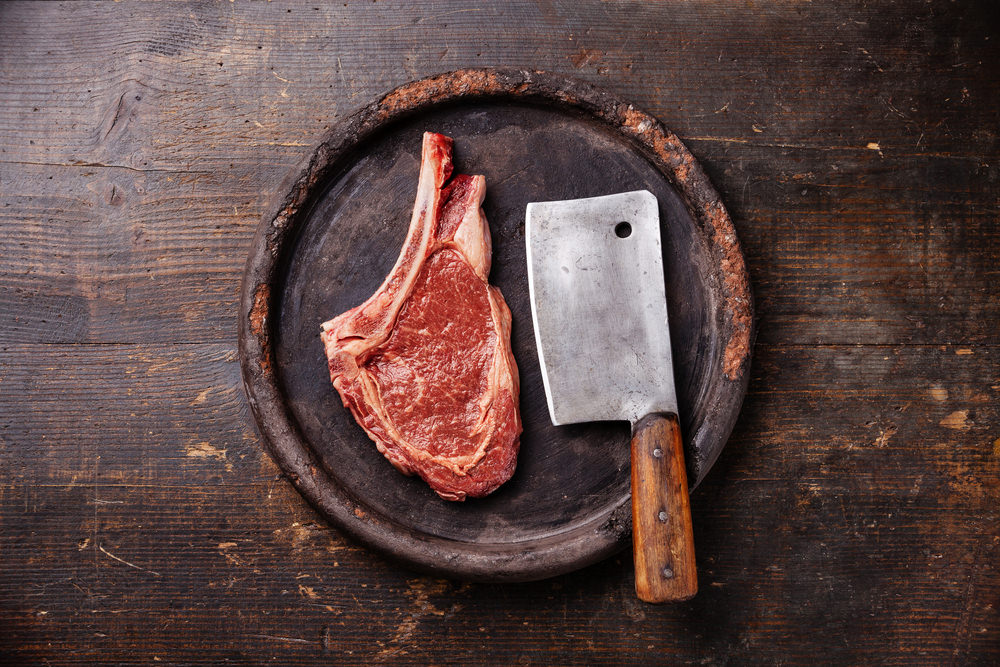 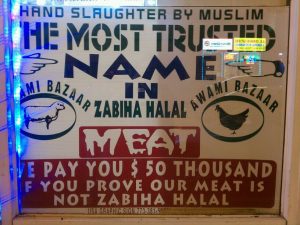 On a recent business trip I went to a restaurant. The hostess noticed I was Muslim and said, “Oh you don’t need a wine list, right?” I told her she was correct. When I sat at the table she handed me the menu and then asked me, “Do you eat meat?” To this I replied essentially that some Muslims are strict about a Muslim version of kosher meat [I have not encountered many non-Muslims who understand what ‘halal‘ is – or many Muslims who understand halal vs. zabihah, but that’s a different story]. She responded to this by saying, “Oh yeah, my boyfriend is from Saudi Arabia and he only eats halal meat.”

For as long as I can remember the meat issue has been at the forefront of every lively discussion between two Muslims. I have seen ‘family night’ masjid halaqahs devoted to this topic. I have seen relaxed, intended-to-be-entertainment discussions get passed around on Facebook years after the fact to one-up people of the other opinion, and Sh. Yasir Qadhi even teaches a full class on the topic. For at least 20+ years, every time I have seen a visiting scholar come to my community, someone inevitably asks the meat question.

A quick google search turns up numerous halal councils, certification boards, websites, ingredient lists, and even halal bills. This is in addition to the unofficial and underground boards that exist in every city.

“Don’t eat at so-and-so’s restaurant, the Muslim factory they buy their meat from doesn’t hand slaughter. ”

“Yeah that restaurant says they have halal meat, but their beef is haram.”

In fact, I remember once reading a comment for a restaurant left on zabihah.com, “I saw the owner buying chicken at Pilgrim’s Pride!”

This not-so-behind-the-scenes discussion violates a key ethical principle – giving people the benefit of the doubt. For some reason, we have turned meat into a haram until proven halal issue. The least of the consequences of this is that it causes us to harbor suspicion against others. In some cases it may lead to unjustly boycotting Muslim businesses. In extreme cases, debate over this fiqh issue causes people to lose friendships and even divide entire communities. I know people who stopped receiving khutbah invites after being seen eating a turkey sandwich at Subway. I have been told to my face that nothing I say about Islam can be believed because I eat ‘outside meat’.

Before continuing further, I want to say what this post is not about.

This post is not about debating which opinion on meat is correct.

This post is not about the fact that eating organic meat may be a more important issue to raise in regards to eating ‘tayyib‘ than the method of slaughter.

This post is not about the fact that meat is a fiqh issue with legitimate differences.

This post is not about the fact that we put other Muslims out of business with accusations over zabihah/halal.

This post is not about the fact that some companies exploit Muslims for business by slapping halal labels on things [many of which aren’t even necessarily meat or food products].

This post is not about the fact that we should not be divided with each other over a fiqh issue.

This post is not trying to say that halal meat is unimportant. —

This post is about the fact that we need to move on.

The education has been done. The fatawa have been issued. People’s minds are already made up. The certification boards are in place. The find-halal-food-fast iPhone apps are slick and fully functioning. Halal meat has made its way into supermarkets and mainstream products have the halal marking on their containers.

I thought the point of this whole halal thing was to facilitate a holistic Muslim lifestyle in America? If that’s the case, I think we have accomplished that purpose. But did it really need to take 20 or 30 years? The way things are going it seems like we will be continuing down the same path for the next 20 as well.

How much work are we putting into purifying our rizq in other areas?

Every dollar we deposit into the bank is being used to support predatory lending practices, subjugation of the poor, and padding the pockets of those who do this. We can’t spend a night wracked with guilt over eating some chicken nuggets, but we sleep soundly knowing that our life savings are sitting in banks and being used to further an out-of-control debt crisis? Why can we mobilize and lobby to get halal bills and require labels to be slapped on products but we don’t even speak up about our tax dollars paying for vacation houses for wall street executives who should be in jail? How long will we continue to utilize credit cards, giving money with each transaction to companies who make money by turning people into wage slaves?

There is no need to rehash the seriousness of riba, but there is a need to take stock of how complacent we have become in our roles of facilitating it. To move forward we need to focus on creating viable and successful Muslim banks or credit unions. These can be set up to give Muslims the security and convenience of bank accounts while knowing that their money is not being used to further propagate a usurious financial system. We need real solutions to the the issues of student loans and car purchases. We need Islamic institutions and investment firms that facilitate home-buying without copying interest based mortgage contracts and just changing the vocabulary. We need to have Islamic insurance companies that can help us fulfill the legal requirements of the law without compromising any of our Islamic principles.

I am deeply saddened by the fact that we fight each other over meat, but we are too distracted to even have the conversations necessary to live a full Islamic lifestyle.

Why not write an article about the financial issues separately? (Already did). Why does meat have anything to do with it? Because truth be told, if this article wasn’t about halal meat, you probably wouldn’t be reading it – and that is the root of the problem.

I don’t have the solutions, but I am interested in helping out. As a community, we need to take this more seriously. When we are passionate about something, like meat, we can get things done. That mission has been accomplished, and it is time to get passionate about finding a solution to one of the most major issues facing us.

Muslim-American or American Muslims? Here is Why It Matters…