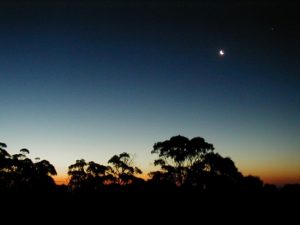 Last June, Muslim Matters asked the following poll question: Did you pray fajr this morning? More than 600 people responded, with more than one-third saying they did not.

Truly from the blessings of Allah is that before I became Muslim, several experiences in my childhood served as such beautiful and potent early morning wakeup training. Unbeknowst to me at the time, these habits cultivated early in life would later be utilized for waking up for fajr prayer. Thus, within Islam, I’ve not found much difficulty waking up for the early morning prayer,masha’Allah tabarak’Allah.

Among my earliest memories of life in upstate New York was of my father grading his students’ exam essay blue books in the early morning hours. My dad would wake up around 2 or 3am to resume the monumental task of grading stacks and stacks of blue books. He would warm up hot water in the kettle on the stove and I would wake up with the whistling of the kettle. Even then, I was somewhat of a light sleeper, I would wake up, crawl out of bed in my footsie pajamas and go join him in the kitchen. While he made himself some tea or coffee, he would make me some hot chocolate and pour it into my beloved pink bunny rabbit bottle. I can’t remember how old I was but I clearly younger than four as I had not yet started kindergarten. I would drink my bottle of hot chocolate and then wander back to my room to sleep until morning.

Find a job that requires you to rise early

Growing up, my siblings and I shared a paper route. I was the youngest and joined my siblings in delivering newspapers when I was 8 or 9 years old in the third grade and continued for another five years until I found a more lucrative and less taxing babysitting job just before high school. Our father would wake us up at 4:30am or earlier every single day, 365 days a year, in winter and summer, spring and fall, during the school year, in any weather no matter how adverse, through snow, blizzards, and rain the newspapers had to be delivered. When all four of us kids worked the route, we had one rest day off every third day but soon it was just my sister Chika and I and so we worked the route daily without breaks except for the occasional summer or winter vacation.

Even after I stopped working the paper route, I often still continued to wake up at 3:30-4:30am to listen to international news on the BBC or Deutsche Welle (DW) or a French broadcast on the local public radio station. I think we find it easy to wake up for worldly matters from work to early morning flights to watching international sporting events because we attach an immediate tangible benefit to that task. Earning money, the thrill of competition, and with airplane flights the pain, hassle, and cost of missing a flight helps ensure we do our best to make the flight on time. For me, the salah is a retreat, precious moments of peace and calming tranquility amidst the storms and stress of daily life. And I fully believe that matters are made easier for me by virtue of the salah and other acts of worship.

Increase in the Fear of Allah

I mentioned this story, a couple weeks ago, here. I remember once shortly after I converted, I stayed up quite late into the night, which was not at all unusual, filled with that new convert zeal and engrossed in reading and learning about my newfound religion. Either I forgot to set my alarm or did not hear it, and I woke up for the first time in a state of complete fear and panic in brightness of the morning. I quickly rushed to make my ablutions so that I could offer my fajr prayer. I prayed hurriedly and then checked the time and to my amazement saw that I had not missed the salah and was still within the timing before sunrise. But I did not feel relieved. I had cried while making my ablutions and while praying and even after I completed the prayer fearful of the consequences of missing a single salah in Islam. Such innocence and hopefully sincerity, one can only look back in silent wonder at that time period so eager, earnest, and blissfully unaware of what lay in store on this journey of submission.

At that time, I remembered a hadith where the companions had overslept for a prayer and they looked upward toward the heavens fearful that destruction might rain down upon them for this singular act of disobedience and I too fearfully looked upward. Thankfully, Allah is Most Merciful and I didn’t miss that salah and Allah has made it easy for me to guard the prayer since then,masha’Allah tabarak’Allah. May we be from amongst those who guard the salah in our lives. Ameen.

Driving or Walking to Fajr in a Mosque

I did not learn to drive until after I became Muslim and among the chief motivating factors pushing me to learn was my desire to attend the mosque for prayer because where I lived, public transportation would not be able to get me to the mosques in the area, especially not for fajr or isha prayer. Soon after I purchased my first car, I think the very next day, I woke up early, googled the directions and was off to begin visiting various mosques for fajr prayer. I loved those quiet early morning drives and loved the feeling of praying in congregation in the mosque listening attentively to the imam recite verses from the Quran. Sometimes, usually on the weekend there would be a short lecture after the salah and soon it became my habit to frequently pray in the mosque especially for fajr and isha prayers.

Even happier was the year I lived within walking distance to a mosque. I would walk in the dark to the salah, often I was the only woman there but occasionally I met some other sisters who would become my dear and expected fajr companions. Now, I still live relatively close to a mosque but it’s become like a man-cave not very welcoming to sisters and so I miss those feelings of praying in congregation. One of the beautiful things about making a commitment to pray in the mosque is that it requires you to organize your day in such a way that you must plan to leave with enough time to reach the mosque before the salah so that you neither delay nor miss the prayer.

Once when I prayed fajr at the Prince George’s Muslim Association (PGMA) in Lanham, Maryland, I was the only woman in the pink musalla, the men were in a separate musalla, and I heard a loud crashing noise. A piece of the ceiling had come down due to heavy rains over the previous few days. I thought about the khushu (humilty and concentration) mentioned concerning some Muslims from the early generations, who would not be distracted from their prayer even as they were afflicted by some harm or the building began to collapse around them. May we increase in our khushu. After the salah, I ventured into the no-woman’s land of the main prayer hall to let someone know about the situation. (pictures of the ceiling tile here)

Top Ten Things Every Student of Knowledge Should Know

Lessons from the Snowflakes