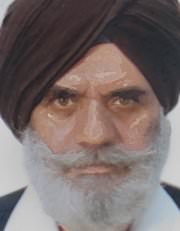 Our condolences to the family of two Sikh elders gunned down in Elk Grove, CA. Sikhs are frequently mistaken for Muslims in The U.S. because of their beards and turbans. This suburb is not to far from where my in laws live. My husband’s 90 year old grandfather takes walks around his neighborhood, everyday.  This could have been anyone of our grandfathers, uncles, friends. This may not seems like such a big deal to people who are living in violence, day in and day out, but in idyllic and  peaceful California, this is like the crack of gunshot in a pristine forest at dawn. A wake up call to all Americans who see their country as land of the free.  This country is changing , ugly rhetoric and violence against Muslims and immigrants is escalating.  While we hide in our masjids and community centers and refuse civic engagement, our narrative gets stolen everyday.  May Allah (SWT) protect us.

The Council on American-Islamic Relations has offered a $5,000 reward after two Sikh men were gunned down — one of them fatally — on a sidewalk in a Northern California suburb.The executive director of the council’s Sacramento Valley chapter noted that Sikh men in beards and turbans are often targeted by those who mistake them for Muslims.”The Muslim community offers its condolences and support to the Sikh community in this time of sorrow,” Basim Elkarra said.

From the Sacramento Bee:

Police said Saturday that they don’t know why someone gunned down two men – frail from heart attacks and advancing years – as they slowly ambled through a quiet Elk Grove neighborhood during their daily afternoon walk.

Surinder Singh, 67, died Friday afternoon on the sidewalk along East Stockton Boulevard near Geneva Pointe Drive. Gurmej Atwal, his 78-year-old friend, was shot twice in the chest. His family said he was in critical but stable condition.

In a statement released late Saturday, Elk Grove Police Chief Robert Lehner called on witnesses to come forward and said, “We have no evidence to indicate there was a hate or bias motivation for this crime; however, the obvious Sikh appearance of the men, including the traditional Dastar headwear and lack of any other apparent motive, increasingly raise that possibility.”

Lehner also said he had “made preliminary notification” to the local FBI office.

Relatives and friends in the tightknit Sikh community to which the two men belong were not as hesitant to call the shooting a hate crime.

Singh and Atwal, like many Sikh men, had thick beards and wore turbans – traditions that have made Sikhs the target of bigotry and violent attacks since the Sept. 11, 2001, terrorist attacks.

“The turban is a big problem for us,” said Gurjatinder Singh Randhawa, chief editor of the Sikh newspaper Punjab Mail USA. “We look the same as Afghan Taliban – but we are not Taliban.”

Randhawa recalled the beating of a Sikh cab driver four months ago in West Sacramento.

The driver told authorities that two passengers had uttered anti-Islamic slurs as they attacked him and then beat a female passenger who tried to stop them. Police have since arrested two men on charges of felony assault with a deadly weapon and commission of a hate crime in connection with the attack.

“A lot of people don’t understand where we’re from. They think we’re Muslim. We’re not,” said Ram Singh, one of dozens of mourners who gathered Saturday at Singh’s home on McGray Way.

Surinder Singh was a truck driver who had worked in both India and Libya before moving to the United States about five years ago, son Harvinder Singh said.

He had recently survived his fourth heart attack.

The senior Atwal moved to the United States in 2001, and the family settled in Elk Grove in 2003.

Gurmej Atwal’s days consisted of eating breakfast, walking the neighborhood for an hour or so, eating lunch and then walking some more, son Kamaljit Atwal said.

“They didn’t even talk to anybody,” said Harvinder Singh.

Kamaljit Atwal said his father is a retired civil servant who spent his career in the revenue department of northwest India’s Punjab state.

“He is quite a gentle man,” the younger Atwal said.

Even neighbors who had never met the victims remembered seeing the bearded, turban-wearing men walking around.

Read rest at the SacBEE

The only native Japanese Imam in Tokyo

How We Train Our Cops to Fear Islam