Recently, watching the events unfolding in Egypt, we have witnessed peaceful protesters being beaten, harassed, doused with water while praying, whipped by horse riding men, and murdered by thugs of the Mubarak regime. If you were able to transport yourself back in time, via a time machine, a couple of decades ago in the United States you would witness a similar scene. The only difference is that the violence that took place then on American streets was being perpetrated against Black Americans. Let us Muslims never forget that beside through the mercy of Allah, we enjoy the freedoms we do today in this country because of the struggles and fierce bravery of African Americans, who withstood the cruelest forms of oppression, long before any immigrants entered this country. February is Black History Month, and its hard to miss the striking similarities between the fight for freedom being waged by Middle Eastern peoples, in light of recent developments, and those waged by African American civil rights leaders. Some of the civil rights leaders most people are familiar with include Martin Luther King Jr., Rosa Parks, and Malcolm X. But there are others who receive much less attention. Fred Hampton is one of those leaders. He mobilized the Black community in Chicago, and for that he payed the ultimate price. 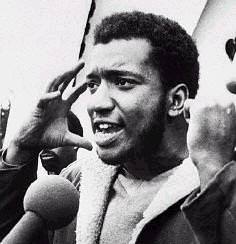 In the late 60’s, Fred Hampton became chairman of the Illinois Black Panthers Party. The Black Panthers believed in empowering the people and they believed that Blacks should pool their resources as a community in order to free themselves of dependence on Whites.  Although many in the Black community joined the Black Panthers movement, some were skeptical and afraid at the beginning because they felt that the Panthers were very direct and militant. The Panthers organized community-empowering activities such as breakfast feeding programs. Under this program many Black children were given the chance to eat breakfast for free – a luxury many of them did not have. Soon, the FBI became aware of this program and they claimed that the breakfast feeding program was a nefarious activity and that it was meant to indoctrinate young minds. From the very beginning of the Panthers movement, the FBI were actively intent on dismantling such an organization that could provide unity for the Black community.

Everyone in the Panthers understood that they could be subject to wiretappings and that they could be followed by the FBI. Besides the FBI, even the Chicago police directed a campaign of covert action against the Panthers and Black gangs. The FBI and the Chicago police saw Fred Hampton as such a threat that they put him in jail.  As a trend through out the civil rights movement, the incarceration of leaders was commonly used in order to diminish the power of Black grass roots movements. Soon, FBI director Hoover designated the Panthers as the greatest threat to the US at the time. The FBI employed informants to be embedded among the Panthers, and one of them was William O’Neal. The task of O’Neal was to implicate and keep track of Fred Hampton. Hampton was a charismatic leader who instilled pride, dignity and self-determination within the Black community. But with the help of this covert agent, Fred was killed at the age of twenty one.

I’m so amazed at how Hampton managed to galvanize a community at such a young age. If Hampton had lived, I’m sure he would have had tremendous potential to affect change in the civil rights movement. I look to myself and ask: I’m twenty two, what has held me back from affecting change in my community? I’m so shocked at how the FBI was actively engaged in dismantling the Black community. The set up that led to Hampton’s death was a brutal murder, and the informant who was involved in the case will have to live with the pain forever.  The highest levels of government were involved in targeting the Black Panthers. Obviously, police brutality has a long history in this country. No one in the Chicago police department was ever prosecuted for the crime of setting up Hampton’s murder. It pains me when I realize that MLK and Malcolm X had suffered the same tragic end. In both of those cases also, the government was deeply involved in eliminating the two men. The Black community of this country has had to repeatedly face the pain of having their leadership taken from among their midst. All of them were vibrant and effective leaders, and that’s what made them the perfect targets.

In this month, Insha’Allah I plan to dedicate future posts to highlight the lives and achievements of civil rights leaders, so stay tuned.