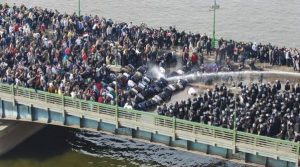 The recent events in Egypt have left us all completely and totally astounded. The mass protests, organized via impromptu SMS texts and Facebook messages, has shown the world that there is still life and honor in Muslim lands!

And amidst all of this clamor abroad, Muslims here in America are asking others, especially their scholars and clerics, what they should be doing. And it is here where the situation becomes more complicated. Some people try to quote traditions that seem to prohibit fighting against the rulers, as if suggesting that the people of Egypt (and Tunisia) have done some type of wrong and incurred sin upon themselves by protesting their conditions. Others, lost in the exuberance of the moment, seem so sure of positive change and so obsessed with getting rid of the current evil, that they do not think two steps ahead, and do not plan for the possibility of failure.

Sometimes, no response from a scholar is in fact the best and safest response. This is especially true when a scholar is sitting thousands of miles away, comfortably in his own chair, pretending to know better than the people of that land. It is because of this that I cannot comment on specifics, and shall restrain myself to generalities. I leave it to the scholars of Egypt to instruct their own people what in particular they should be doing.

But for those here in America, who dare criticize the Egyptian masses based upon their own understandings of a set of hadith, I say to them, “Hold your tongues! You are not living in their situation. You have not experienced years and decades of economic, social and political repression. You have no right to pass verdicts on the situation of a people other than your own. Live their lives for a decade, and then feel free to comment on what they are doing.”

I say this loud and clear: as Allah is my witness, my heart jumped for joy as I heard news of these protests, and saw the masses of Egyptians pour out onto the streets, wanting positive change, tired of the puppet-regime that had ruled them for three decades, confronting tanks with their bodies, prostrating to Allah in front of the troops even as they are doused with water guns. How can the heart of ANY believer not be overjoyed seeing the courage that the average Muslim has in opposing the tyrannical regimes that they are living under? And note as well that the protesters are unarmed and non-militant – this is not ‘fighting against the ruler’ but rather protesting against injustice! Lastly, we turn to the scholars of that region to actually pronounce a verdict on those rulers, and to comment on whether their ‘rule’ was even an Islamically permissible one to begin with, such that we can can quote ahadith in support of such rule!

Yet, even as a write these words, I also must point out that a sense of complete happiness and blind cheer-leading is premature. This is not the first time that people have protested against a tyrannical regime, nor even forced a brutal dictator to flee. Sadly, all too often, when one dictator flees, another who is even more brutal takes his place. The very country that we are witnessing these protests in is a testimony to this fact: let those who learn from history see who the current dictator’s predecessor was, and by whom was he removed, and how he was removed, and what the effects of that removal were.

Therefore, in my humble estimation, instead of immediate triumphalism, the wisest course of action for us here in the West is to have a sense of tempered joy, a feeling of cautious optimism. Yes, we wish for the people of Egypt and Tunisia and many other lands to enjoy the freedoms that our religion allows them to enjoy, and to live peaceful and joyous lives in this world so that they may better prepare for the next. But the lessons from history also allow us – dare I say even require us – to feel a sense of hesitation and perhaps even trepidation. A healthy dose of skepticism is wise if it causes us to form better plan of action.

There is little that we can do from afar other than to make du’a for the people of Egypt, and for all Muslims around the world. But there are some moral lessons that we can derive from the events that we are witnessing:

Firstly, that the calls by the militants and even by the political Islamist parties did not, in and of themselves, bring about the type of protests that came from the hordes of masses. These groups have been calling for such demonstrations and wanting to see such protests for decades, yet they could not accomplish even a fraction of what the masses have done in this last week. And in this, we learn from the Prophetic methodology: change must begin at the ground level, bottom-up, and not top-down. Change begins in the heart and in the home, and it shall eventually reach the streets and shake the foundations of government.

Secondly, we should truly appreciate and thank Allah for our own situation here in the West, where, despite all the negatives of foreign policy and the beginnings of Islamophobia, the two greatest blessings that man needs are still available to us, and we thank Allah ‘…who has given us food to save us from hunger, and protected us from feeling scared’ [Quraysh; 4]. Not everything about ‘the West’ is evil, and we thank Allah for the good even as we strive with every legitimate means to change the bad.

And lastly, we should realize the Sunnah of Allah, as we are witnessing it unfold before our very eyes. For indeed, Allah might give a tyrant some respite, but He never neglects such a person, and when Allah’s reckoning comes, it is swift and just. Tyranny is darkness, as our Prophet salla (Allahu alayhi wa sallam) said, and injustice will never be allowed to go unchecked. And if this is happening here, in a Muslim land, how about injustices being perpetrated by others who do not believe in a God nor do they have any humanity left in them? What will entire states who practice injustice against innocent civilians and occupy their lands do when the Lord of those peasants and the Protector of the weak calls the tyrants and occupiers to task? Let them pay heed if they have any heart to do so, for their time shall surely come as well.

May Allah guide the people of Egypt to do what is best for Islam and the Muslims!
May Allah protect those protesting on the streets against the tanks and guns and weapons of the regime!
May Allah protect their loved ones from the plunder and looting of thieves and criminals (those in office and on the streets)!
May Allah bring about a state of honor and glory for this religion, where righteous people are shown respect and given office, and the unrighteous are discarded and ignored!
And May Allah protect us all, in this world and the next!

Ali Shehata | Reflections on the Protests in Egypt